Alone With You Review In the opening scene of Alone With You, you stand on the edge of a rift with your scarf blowing in the wind. Smoke billows in the distance, and space stations are reduced to rubble. A deep sense of loneliness washes over you, as you come to terms with being the only one left. Toying with this sensation, Alone With You makes you question whether you are really as alone as you first thought. This adventure game offers an interesting premise that retells the downfall of a space colony, but fails to support it with a captivating storyline.

Following a failed terraforming project, all of the other colonists are dead, and time is of the essence. With only 21 days before the planet implodes, you must escape back to Earth by repairing the last remaining escape pod. To fix your ship, you rely on your A.I. companion and holographic recreations of the colony’s four leaders. You spend your days rummaging through the old facilities they ran, scavenging for supplies and parts for your escape pod. Though you encounter light puzzles when exploring these areas, you spend most of your time scanning objects hidden in corners or underneath rubble. This process is more tedious than enjoyable, since the scan is followed by uninteresting technical explanations.

Puzzles are scattered from one location to the next. These rely mostly on common sense and finding hints in your surroundings. For example, you often have to figure out a terminal or locked door’s key code to gain access, and usually the answer is nearby, such as scribbled on notes stuck on the walls. One of my favorite puzzles had me reading descriptions of deceased colonists through a computer program, and then deducing who lived in which rooms based on their bios. While this is a highlight, much of the puzzles are too simple and repetitive; more often than not, you’re trying to figure out a password.

Alone With You is at its best when it forms a compelling narrative about the colonists that lost their lives, but it gets too hung up on details. I enjoyed discovering pages from one of the colonists’ short stories scattered around a communications tower and reading the excerpts, but this was a rare occasion. I was usually too busy scanning mundane objects like thrusters, research notes, and plants.

An upside is that every night, you visit a holo-sim chamber in your space station to speak with one of the four colonists, depending on which station you ventured to during the day (the holograms are sentient, even though their “true” selves are dead). Here, they impart their expertise, but they also offer you friendship – and if you play your cards right, even love. You discuss what you found, but you also get a chance to learn about them as people. As time passes, the holograms and even the A.I. open up about past regrets with the terraforming project or their personal lives. The holograms, however, have gaps in their memory, especially the moments leading up to their deaths. None of them know how they met their demise, and part of your mission is unearthing those mysteries and giving them closure. Some feel their leadership failed, others delve into reflection on existentialism, and these are Alone With You’s most captivating moments. Each character’s reaction is unique, and provides insight into the fall of the colony.

With each completed week, you can choose one of the four holo-leaders to spend quality time with. It has an awkward date vibe to it, as you admire serene and idyllic sights with them by your side. The dialogue feels genuine, but my biggest problem is that these characters lack personality. They all feel similar, and even as you dive into a romance, those relationships never reach their full potential. For example, I made sure to choose one colonist for each of these meetings, yet it never progressed passed “awkward date” to actual romance.

Alone With You is an endearing adventure, albeit a flawed one. Despite its dark subject matter, it somehow remains to have a lighthearted tone with its pastel, washed-out aesthetic. I admired the different locations and existential tone, but longed for a more captivating storyline. Like the holographic cast it chronicles, this experience lacks a distinct personality, leaving it as a charming but forgettable adventure. 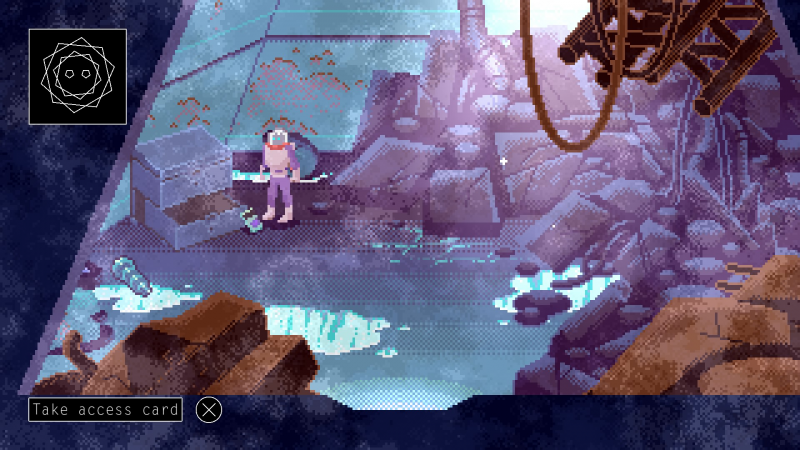 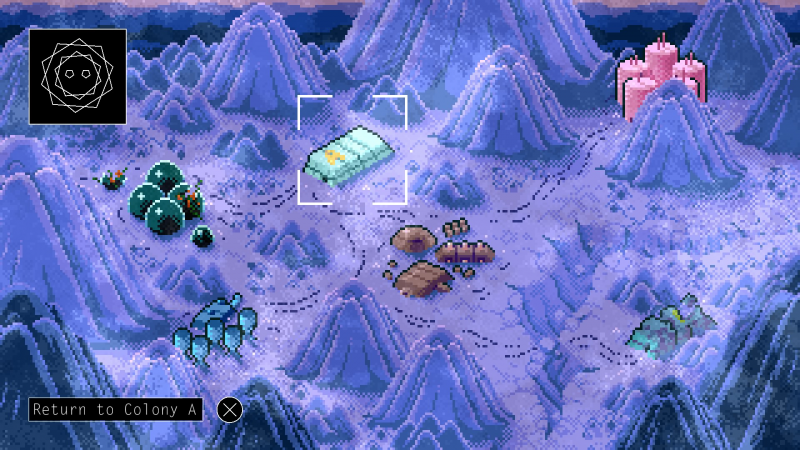 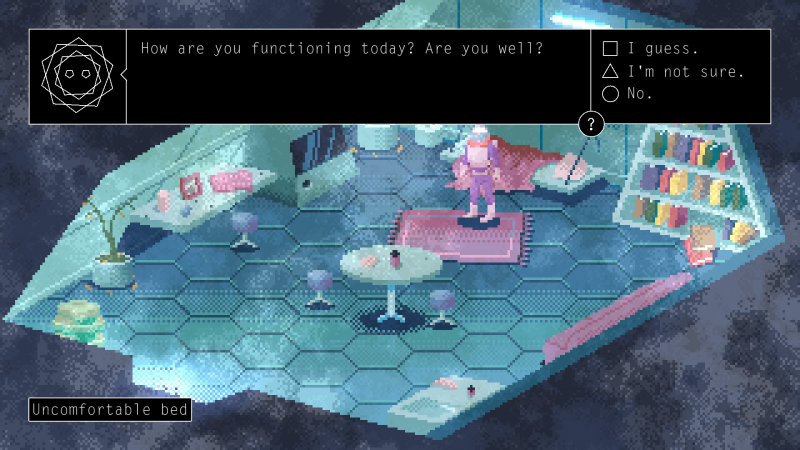 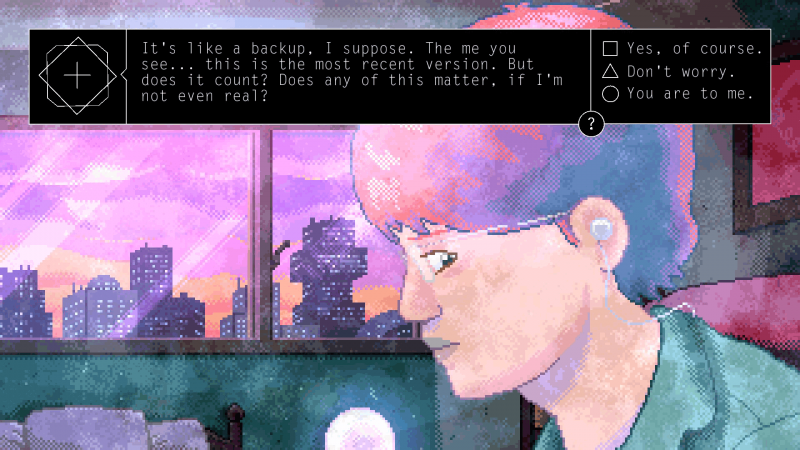 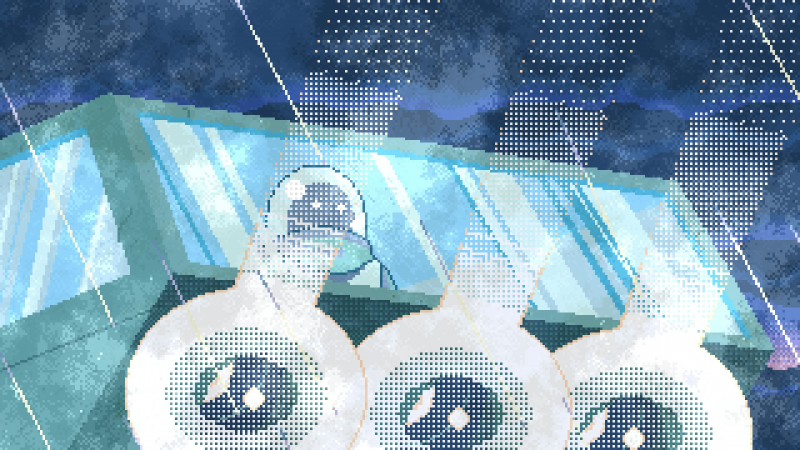 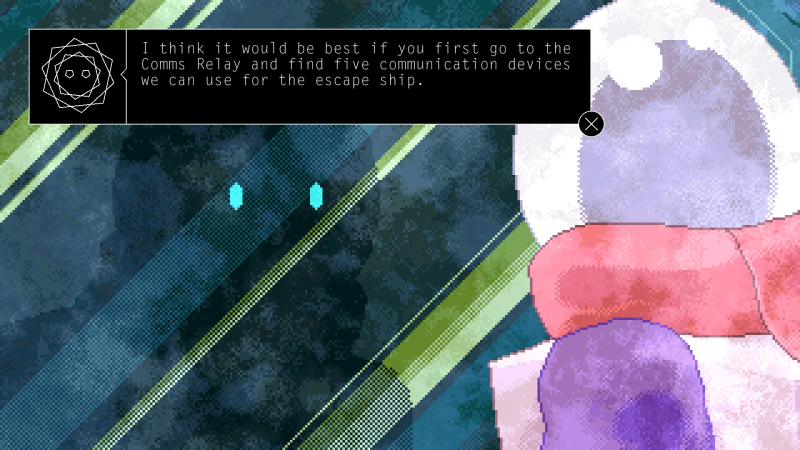 7
About Game Informer's review system
Concept
Scavenge for parts and enlist the help of holographic recreations of dead colonists to repair your escape pod
Graphics
The soft color palette and pixelated graphics make for an appealing aesthetic. However, a transparent smudge on-screen can obscure your view and be distracting
Sound
The electro-themed soundtrack adapts from one location to the next, with its beautiful and ominous dings and clings
Playability
Alone With You offers occasional puzzles, but most of the gameplay revolves around exploration
Entertainment
While searching and scanning for items remains tedious, the conversations with the holograms are the highlights
Replay
Moderate 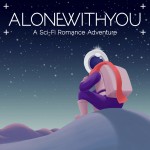