Alien came out in 1979 and almost single-handedly defined sci-fi horror. Predator released in 1987 and re-envisioned monster movies, creating a new terror for twelve-year-olds to obsess over. This year Rebellion releases Aliens vs. Predator for home consoles, and like an antithesis to Reese’s Peanut Butter Cups, it proves that two great flavors don’t always taste great together.

Set after the events of Alien 3, a group of scientists on planet BG-386 begins breeding Xenomorphs for war. A war party of Predators learns about these experiments and decides the best thing they can do for the universe is to travel to BG-386 and put a stop to this bad idea by wiping out the colony. Players play through three different campaigns, each one telling a different side of the same story. This may sound like a lot, but since all three campaigns reuse the same levels they feel a bit repetitive.

Each campaign also contains its own special set of problems. The human marine section is set up like a survival horror FPS. There are a few good scares within these corridors, but after getting locked inside a room and having to fight off a horde of Xenomorphs for the 100th time, the repetition drowns the experience. It doesn’t help that the controls feel clumsy; your crosshairs have no auto-aim grip when they pass over an enemy. The levels are far too linear, and after doing one gofer mission after another you begin to forget why you’re on this god-forsaken planet in the first place. You can use flares to illuminate the game’s overtly dark corridors, but a decent flashlight would have worked better in a firefight. Unfortunately, your flashlight is about as useful when lighting up dark corners as a laser pointer would be when reading a highway road sign.

The Predator sequences put you behind the heat-visioned stare of a young hunter trying to prove himself to his clan. I had fun using the Predator’s iconic arsenal. The shoulder mounted Plasma caster turns Xenomorphs into piles of acid in no time, but that overpowered piece of hardware is justifiably reined in with limited ammunition. Instead, the Predator campaign maintains a heavy stealth focus, which would be great if it weren’t for the limited melee combat and linear level design. It seems like there is often only one right way to approach a situation, and this leads to frustrating, slow progress.

The Alien campaign plays like a combination of the other two. Like the Predator campaign, it has a stealth focus, and like the marine campaign, it sucks. As an alien bred for war, you fight your way out of captivity, eviscerating marines trained to ignore strange sounds and forget about missing allies. Xenomorphs are supposed to be the deadliest creatures in the universe, but considering how many times you have to slash at these wimpy scientists before they fall over, you’d think you were tickling enemies to death. The breeding experiments must have resulted in a weaker strain of Xenomorph, because these aliens seem highly vulnerable, lacking much of the power and terror they possessed in the films. Worst of all, the Xenomorph’s ability to walk on walls makes navigating the world a disorienting affair. It’s fun to drop down on your enemies from above, but it’s far too easy too lose sight of your target and end up turning a corner and walking right into a gun muzzle. Your biggest battle in this campaign will be fighting off motion sickness.

Multiplayer is the closest thing AVP has to a saving grace. Some gamers might appreciate how all three races can go head-to-head in the game’s deathmatch and CTF-like matches. Predators can reach area marines can’t, while aliens can be crafty by hiding in the shadow but are no match for their foes in hallway battles. Unfortunately, many of the single-player problems – such as the frustrating alien controls and Predators’ sloppy fisticuffs – carry over online as well. Not to mention, most of the multiplayer maps are cannibalized from the single-player campaigns.

The only two multiplayer modes that stand out are Infestation and Predator Hunt. Predator Hunt pits one Predator against a team of marines. It offers slower, more strategic hunter/prey scenarios, and does a better job at showcasing the Predator’s unique talents than the single-player game ever does. Infestation takes a group of marines and pits them against an alien. As the alien kills the marines they get converted to more aliens, and the remaining marines have to work together to survive. Holding out as the last marine is nearly impossible, but it’s exciting to try.

Curiously, Rebellion’s 1999 PC release, Aliens vs. Predator, was well received, but this update captures none of that game’s unique spark. Instead we have a title trying to live off the fumes of two dormant franchises.

5.75
About Game Informer's review system
Concept
Three different campaigns and several full-featured multiplayer modes provide plenty of content for those who can put up with the rest of the game
Graphics
If the lighting was better and the environment a little more detailed, AvP’s atmosphere could have been moody. As it stands, it’s just plain
Sound
Listening to the aliens crawl through vents and jump out at you would be scary if your motion sensor wasn’t constantly bleating in your ear the whole time
Playability
Weak melee combat results in a few frustrating encounters, but the game’s poor AI keeps things relatively easy. Good thing these marines never figured out how to look up
Entertainment
he original Aliens movies changed film forever, but this game is more derivative than a straight-to-video Steven Segal movie
Replay
low 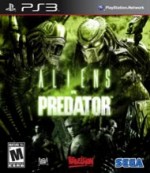