During the twilight days of every console, handheld or otherwise, some of the best games get released only to go by undiscovered. Aliens: Infestation just might be one of those titles. It’s releasing just as the 3DS is stepping into the spotlight, and may get unfairly ignored as a licensed game. Don’t let this one pass you by, especially if you have been craving a 2D Metroid experience, because this may be the closest you will get for quite some time.

Aliens: Infestation puts you behind the guns of an ever-expanding group of marines as they attempt to stifle a xenomorph outbreak. Your mission begins innocently enough: check up on a ship that the fleet has lost communication with and hope that nothing has gone terribly wrong. You discover the aliens fairly quickly, and from there you’re fighting for survival while exploring the game’s environments.

The game is not quite a Metroid clone, but it borrows liberally from that franchise. You will build a map as you explore, find and upgrade weapons, and track down items like a welding gun or flashlight that allow you to explore areas that were previously inaccessible. Infestation lacks the size of Metroid, and certain areas are broken apart as separate levels that cannot be revisited. You do often return to one large area to explore further and further as you gain new items from the aforementioned levels. Checking in at save points regularly is vitally important, more so here than in a Metroid.

One element that separates Infestation from Metroid – and most games in general – is that when you die, you die permanently. The only way to recover a dead character is to turn off your system and start from your old save. You begin the game with four marines, and when you lose one, he’s gone forever. You will never recover that character, but you can find other marines hidden throughout the game that can take their place. I lost all but one of my original squad by the end of the first boss fight, but had found three new recruits to take their places within the next hour. Throughout the course of the game I lost a total of 13 marines.

Each marine in the game has their own idle animations, character design, nickname, and distinct personality. They all play exactly the same, but when you lose one, you really feel as though you are losing a person rather than just a generic soldier. Moments when you are nervously seeking a save point are all the more enthralling for it. Boss battles, which typically ensure at least one death, are that much more traumatic and meaningful. Not all of the characters are particularly interesting or worth keeping around (I can’t say I was too disappointed when I lost leetspeaker Mei-Lin), but they all feel like real soldiers, which is impressive.

Infestation can be a pretty serious game with all the death, danger, and ominous music, but it manages not to take itself too seriously all of the time. Some of the characters have the odd funny bit of dialogue, and you can play the game featured in the film where you stab a knife quickly between your fingers in an unlockable minigame. The less said about the end credits music the better. I would hate to spoil the surprise, which I recommend you stick around for.

Infestation does have some problems. The combat controls can be uncooperative from time to time. Once you begin firing in a direction you’re locked in that direction, which causes problems when attacking the nimble xenomorphs. I also ran into trouble, and lost at least one soldier, to a weak enemy who just happened to be standing in between two boxes. I couldn’t shoot over the box, it isn’t possible to jump and shoot at the same time, and when I stood next to the enemy between the boxes we ended up being too close for me to shoot him. It sounds like a very specific complaint, but it’s a problem I ran into multiple times.

Infestation’s quality is surprising in a sea of mediocre licensed games. It’s not afraid to show off where it got its inspiration, but that’s okay. Metroid’s format works well in the world of Aliens. There are a few minor frustrations, and the mortality of the characters was surprising, even frustrating at first, but ultimately it adds a worthwhile sense of fear to the entire game. If you’re a fan of Metroid, Aliens, or just solid handheld experiences, don’t let Infestation become forgotten as the 3DS wave washes over us. 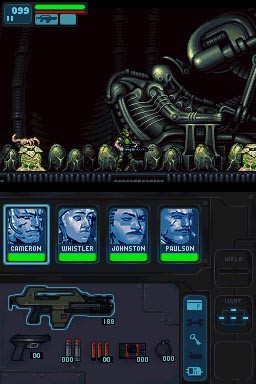 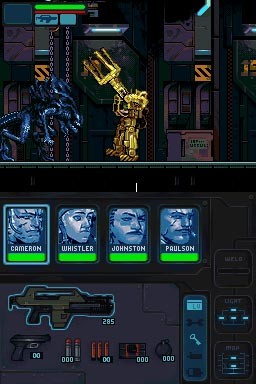 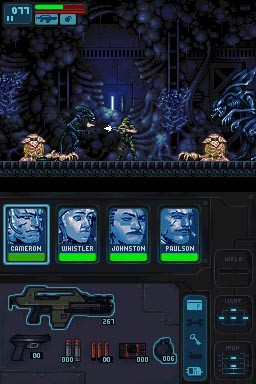 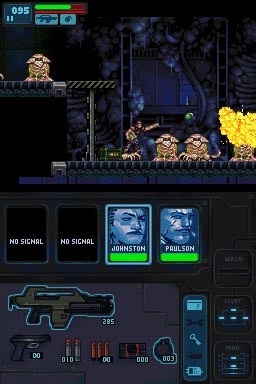 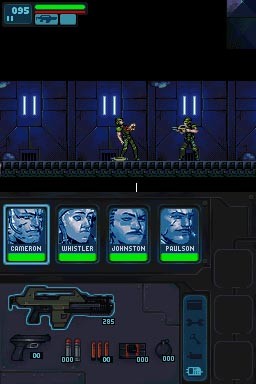 During the twilight days of every console, handheld or otherwise, some
of the best games get released only to go by undiscovered. Aliens:
Infestation just might be one of those titles.

Purchase More Info
8.25
i
Game Informer's Review System
Concept Combine the Aliens mythology with Metroid-style gameplay
Graphics The DS can probably do better, but the animation and art direction are great
Sound Ominous music and the constant beeping of the motion tracker keep you on edge. Make sure to listen to the credits music
Playability Solid platforming with some minor shooting frustrations
Entertainment Good dialogue and a desire to explore will definitely keep you going to the end
Replay Moderate