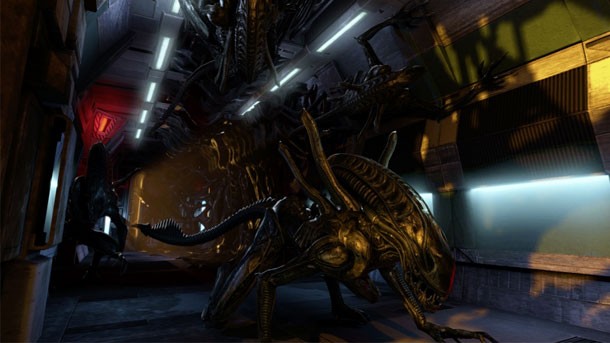 All the parts were there. Five years ago, Sega announced that Gearbox was going to develop an FPS based on the Aliens franchise. The studio had demonstrated its chops through the Brothers in Arms series. Not only that, but Aliens: Colonial Marines had Fox’s blessing to tell a canonical story that bridged Aliens and Alien 3. It looked pretty good in demos, and for a moment it seemed as though, after being disappointed for decades, Aliens fans were finally going to get the game they deserved. Unfortunately, the result of the long wait is something that feels like an abandoned mod.

As for Colonial Marines’ much-hyped story, there’s clearly a reason why a canonical bridge between the films didn’t exist: Absolutely nothing of any consequence happened. A bunch of no-names walked through the aftermath of Aliens (Nuke? What nuke?), fought some more xenomorphs, and met up with a familiar face in a ridiculous bit of revisionism. Plenty of nods to memorable events pop up, but it feels like walking through a funhouse with the lights on. It makes once-powerful moments seem shabby and low-rent. It’s great to see Bishop (or part of him at least) in a hangar, but at the end of the day, it’s just a pair of gooey pants. Colonial Marines understandably wants fans to soak up their favorite moments, but it doesn’t offer any new thrills in return.

Take the xenomorphs, for example. In the films, the creatures are unrelenting and terrifyingly fast. Here, they’re a nuisance. The first time you spy them, there’s an anticipatory thrill – you’ve seen them before, and you know what they’re capable of. Then you blast a few dozen apart, and you start to notice the problems. They look great when you can’t really see them, but you end up seeing them a lot. After a few encounters, I couldn’t help but start to pick it all apart. When they rush at you from around a corner, they look as though they’ve been pushed onto a stage by an unseen hand; they’re oddly off balance, and they seem to be just as startled to be there as you are to see them. The ones who fall from the ceiling tiles do so with all the agility of a scarecrow. They’re hardly the graceful monsters the films introduced us to, and that one detail sucks a tremendous amount of oxygen from the experience.

The entire xeno life cycle is represented, including chestbursters (who can pop right through armor plating!) and facehuggers. The facehuggers in Colonial Marines are silly pests who seem as though they’re just going through the motions. At one point, I yanked one off me and flung it onto a crate, where the still-living creature lost all interest in me. Apparently I hurt its feelings.

Colonial Marines also introduces a few new xeno types, but they don’t do much to alleviate the overall sense of sameness. One large triceratops-like beast charges around, leaving his soft back parts exposed. It’s nothing you haven’t seen before. My favorite new alien type came during a forced stealth section. There I was, stuck in a sewer with a crowd of gray, husk-like xenos. Only they weren’t dead! Sometimes, they’d spring to life and patrol their immediate area. The only way around them was by holding still until they passed. Their prancing walking animation (think little kid impersonating a T-rex) was the funniest thing I’ve seen in a long time, and it literally made our video producer fall out of his chair laughing. 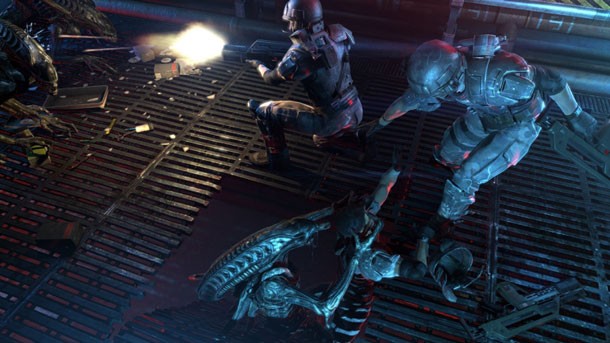 Then there are the people. I was stunned at how ineffective my squadmates were, particularly my pal O’Neil. I don’t know how this mouth-breather managed to squeak through basic training. He’d routinely sweep a room by darting into the nearest corner and keeping a close eye on both walls. There were moments where I’d glance at him in a firefight, and he’d just be staring off at nothing, the tip of his Smartgun clipping through a snarling xeno’s domed head.

Fortunately, the Weyland-Yutani goons that eventually show up aren’t any brighter. I can’t recall seeing worse AI this generation. I lost count at how many times I’d open a door, only to see a completely oblivious enemy facing me a few steps away. I almost felt guilty killing them, but once I remembered that they were standing between me and the end of the game, I got over it.

Any real difficulty comes from the underpowered weapons. The arsenal is familiar, with pulse rifles, shotguns, flamethrowers, and that Smartgun. Aside from the Smartgun, the loadout is weak to a fault. It’s not so bad at close range, but when you’re stuck trying to plink away at distant targets, weapons are unforgivably terrible. There’s a goal-based upgrade system in place, but those upgrades only make the weapons slightly less bad.

Multiplayer holds a glimmer of hope, and could provide a temporary distraction for folks who pick up the game. Players control colonial marines or xenomorphs in a variety of matches, ranging from standard team deathmatch to a territories-like mode, and a tense battle to simply stay alive before time runs out or your squad is dead. The problems that plague the single-player campaign persist in multiplayer, however, so be prepared to see dopey alien animations. Players who select the xenos can expect to see screen-obscuring wagging tails and doorways that have to be entered at precise angles. Overall, I had the most fun with the multiplayer, but even that couldn’t salvage Colonial Marines.

I’ve been playing Aliens games since the days of Doom mods, and for all the technological advances we’ve seen, this stands among the worst – including the Jaguar version. I love this universe, and I even enjoyed Rebellion’s Aliens vs. Predator. For my money, the Colonial Marines’ campaign in that release is exponentially stronger than Gearbox’s attempt, even though it was merely one third of the overall AvP package.

Take away the Aliens license, and you’ve got a shooter that has no reason to exist. It would be like stripping the terraforming from Fracture or playing Inversion without its gravity-defying gimmick. At its best, it’s barely mediocre. The license is all there is. Aliens has cast a long shadow in the gaming world, inspiring plenty of excellent games throughout the decades. It’s a shame that the actual license hasn’t spawned anything approaching those levels of success. Aliens: Colonial Marines’ odious mess can be smelled from low orbit, and only the most ardent Aliens fans will find anything redeeming.

4
About Game Informer's review system
Concept
Tell the story of what happened between Aliens and Alien 3 in a canonical FPS
Graphics
Textures are a garbled mess, popup is constant, and the animations are laughable and distracting
Sound
The staccato delivery of the pulse rifle and the motion tracker’s thumping pings sound fantastic
Playability
Weapon upgrades only serve to make your arsenal less worthless
Entertainment
Aliens fans should be inoculated against disappointment by now, but this is even too much
Replay
Low