Agony’s premise is simple: you play a soul who has been damned to the deepest pits of hell. Your job? Escape. A survival-horror game in the mode of Amnesia and Alien: Isolation, Agony makes a strong first impression with its opening cinematic thanks to astounding visuals that pop and crackle, showcasing fiery skies and trees branches with organs hanging from them as your character is cast into the great abyss. Unfortunately, only boredom and frustration follow in the wake of this well-crafted cinematic, ushering players through the dullest version of the underworld I’ve ever played.

For the vast majority of this odyssey, you play as a soul jumping across withered bodies, using each one as a host to navigate the underworld until a monster kills your host, forcing you to jump to another. Sometimes you can possess demons to bypass obstacles, but most of the time you’re playing husks and hiding in the dark from giant, gross monsters. And when I say dark, I mean really dark; I had to turn up my brightness settings all the way up to even see anything, which robs the monsters and the hell-world of their power to inspire fear. Seeing all of hell lit up is particularly disappointing, as the majority of the environment feels like you’re navigating one big, bloody organ that looks the same everywhere. The protagonist’s distorted fish-eye view also made me nauseous, and I rarely suffer from simulation sickness.

The combination of poor enemy A.I. and cramped level design is Agony’s biggest downfall. Demons are everywhere, patrolling for you. Most of the environments they guard are tiny, barely larger than a hallway. These foes can’t see you, but they have heightened hearing, so you have to hold your breath to avoid being caught. Of course, this is useless because the mechanic is clearly broken. I died countless times to these monsters because they heard me even though I was holding my breath or they ran into me because the game gave me literally nowhere else to go, meaning that life and death often comes down to pure chance. Death also often means being thrown back to a checkpoint that can cost you 15 minutes of progress.

Agony makes things even worse by requiring you to find objects (like bleeding hearts) to unlock doors as you navigate mazes of corridors. The resulting scavenger hunts are deeply annoying, as the majority of my time playing the game was spent scanning the ground for keys, in the dark hoping that an enemy wouldn’t happen to come by and murder me.

Compounding the hide-and-seek frustrations are a number of bugs and technical issues that make certain points of the game downright unplayable. Aside from framerate drops, my character also became stuck in walls and all I could do was wait until a monster came by and chomped me to death. Even when the experience isn’t beset by tech issues, the act of moving around in the world is so cumbersome that it’s a pain simply to move around.

Even with all of these issues in mind, this journey to hell might have been worth the trouble if the game had a compelling story. It doesn’t. Your way out of hell involves finding and doing the bidding of a mysterious Red Goddess, but the voice acting and writing is so poor that my eyes glazed over any time a demon started spewing a monologue at me.

Agony lives up to its name in the most dreadful way possible. The gory shock tactics try too hard to impress, and are ultimately a moot point given just how effective the game’s brokenness is at dispelling any palpable fear or awe I might have had and replacing it with aggravation.

3.5
About Game Informer's review system
Concept
Play as a wayward soul trying to escape from hell with only their wits and possession abilities to aid them
Graphics
Both enemy and environmental designs are uninspired and often too dark to see anyway
Sound
Grating voice acting and repetitious cries from the damned souls of hell make Agony an awful audio experience
Playability
None of the systems are explained well, and poorly laid out environments result in constant navigational frustrations
Entertainment
Inconsistent enemy A.I., a bad story, and lackluster environments come together to create a grueling slog of a game
Replay
Low 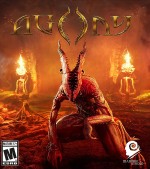