If you worked out only half of your body, you wouldn’t merely look ridiculous; you'd also only be as strong as your weakest half. This was my experience with Age of Wonders III, which is essentially two games in one. A series of turn-based wars have you managing a variety of units across the battlefield, and a 4X strategy layer lets you govern the cities within your kingdom, build your war machine, and manage your population’s happiness. While the war strategy is strong and full of interesting tactical choices, the empire simulation is less interesting and more repetitive. Age of Wonders III’s uneven strengths ultimately make it weaker in the long run.

In traditional fantasy style, you begin the game by choosing your warrior race from a selection of humans, orcs, dwarves, or the dragon-like draconians. The differences between races runs deeper than skin tone and ear shape; each race features a version of the basic combat classes such as ranged archers, knights, sorcerers, battering rams, but they use these classes in unique ways. The high-elf longbowmen, for example, are well-armored archers with a balanced ranged attack. Goblin swarm darters, on the other hand, have a weaker overall attack but inflict poison damage and have a night vision that gives them added range in the dark. Even if you have holes in your army, you can conquer different racial cities and use their training grounds to add their unique unit types to your growing horde.

Hero customization and spells are especially good, letting you develop a leader who can wade into battle beside your warriors on horseback, send lightning from the sky down on your opponents, or summon wild animals to charge into the fray. The diversity of class types gives you a lot of options when approaching a battle, which is good because Age of Wonders III’s randomly generated battlegrounds are sometimes a little simple. However, even a basic walled castle presents you with a plethora of strategic attack options. Do you pelt your opponents with volleys arrows from outside and hope they come out and fight? Do you send your gryphon riders to fly over the wall? Or do you have your hero teleport through their fortifications and shake up the enemy's defenses while risking death? Each strategy has weaknesses and strengths, but finding the battle plan that works for you is rewarding. Even during exchanges where I was highly outmatched, I occasionally pulled out a win thanks to careful planning.

These skirmishes can be auto-resolved, which helps save time during battles where you heavily outnumber your opponent. I wish you could also auto-resolve many of Age of Wonders III’s top-level strategy elements. This section tasks you with managing your cities' population and production. Like other 4X titles, Age of Wonders III lets you explore a larger world map, establish new cities, and even explore dungeons filled with bandits. However, unlike its peers, military dominance is really the only way to win here. The only reason to build up your cities' economies is to funnel that money back into the war machine. Researching new technologies is only good for unlocking more powerful military units. I enjoy the feeling of progress, but when all roads ultimately lead to the same place, the top-level decisions feel less like real options and more like a slog of clicking through menus.

A story mode lets you follow a young elf woman on her quest to avenge her brother's death and prevent the massive Empire known as the Commonwealth from overwhelming her race, but the tale isn't that compelling.  Everything that's entertaining about Age of Wonders III can be distilled into smaller and more bite-sized scenarios, but it's nice to have some context for why your army is trying to defeat the other army. This whole experience easily shifts over to the online arena, where you can participate in epic wars with up to seven other players. The mechanics don’t change much online, but the diplomacy interactions become more interesting when you’re bartering with real people.

Age of Wonders III's wealth of unit types and leader abilities leads to some engaging battles. I just wish as much thought was required for its strategic empire-building sections. If you can put up with the toil of running an empire, you are treated to some compelling and rewarding combat. Unfortunately, you have to do both, because you can't play only half a game. 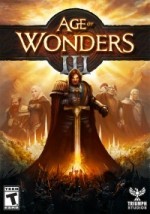 Purchase More Info
7.5
i
Game Informer's Review System
Concept A strong turn-based fantasy strategy game mixed with a simplified 4X empire simulator that can feel like a chore
Graphics Features a nice diversity in unit types, but the simple environments won’t push your GPU to the breaking point
Sound A peppy drum-filled soundtrack will get you pumped for war, but the voice acting will make you happy to just read the subtitles
Playability Age of Wonders III’s many systems feel complicated at first, but you will pick up the basics in a couple hours
Entertainment The turned-based battles will leave a lot of strategy fans happy, but I wish you could fast forward through the rest of the game
Replay Moderately High