This Bloody Cartoon-Based Slasher Shines at Combat and Fails at Platforming
by Matt Miller on Sep 22, 2009 at 01:57 PM Licensed games rarely exhibit this much style and unique content. Afro Samurai succeeds by delivering on the promise of the work it is based on while expanding the storytelling in memorable ways. A few technical flubs and design choices can make the gameplay frustrating, but the experience as a whole is one of the better attempts of transitioning between the anime and gaming mediums.

The meat of Afro Samurai lies in its complex sword battles, which require careful timing and astute observation of enemy techniques. Combos unlock over time, and there is an increasing level of skill involved in mastering combat -- the hack and slash approach won't cut it. Fast-paced juggling of enemies must be alternated with frequent use of a powerful slowdown mechanic to finish off foes. This technique makes most encounters challenging and enjoyable. Sadly, you'll struggle with the viewing angle a lot, since the developer opted for an approach that sometimes leaves the perspective in your hands, and sometimes snatches it away. The result is that you always have one extra enemy to confront -- the camera.

Even as combat generally shines, the frequent devolutions into platforming don't hold up to scrutiny. Falling during simple leaps is far too easy, and the movement controls feel too stiff to provide a sense of freedom and agility that befits the character. The quality of the boss battles lies somewhere between that of the platforming and the overall combat experience. Several are genuinely exhilarating, particularly a certain midair meeting. Others are painfully tedious, thanks to some punishing individual attacks that have an arbitrary counter that can take numerous deaths to uncover. These barriers to progression feel less skill-based and more like trial and error.

Stepping past mechanics, the game hits its stride through its sophisticated script and intriguing story. The main character's quest for revenge feels all the more powerful because he is so unhinged. Teetering on the edge of sanity, he's an anti-hero who you don't necessarily want to see succeed, even as you control him throughout his journey. Anyone who has seen the animated version will enjoy the way this game expands the mythology in meaningful ways, and diverges from the animated story at key moments.

With the remarkable hip-hop infused soundtrack and strong voice acting from all the lead actors of the show, the game is worth it for action fans willing to tackle this bloody exploration into the nature of vengeance.

7.75
About Game Informer's review system
Concept
Slice through your enemies in this bloody but imaginative retelling of the standout animated show
Graphics
A slick, stylized art style carries the game a long way, suitably evoking the feel of the original animation
Sound
A fantastic score combines hip-hop sensibilities with traditional Japanese themes to great effect, and the voice acting is superb
Playability
A stubborn camera and touchy controls can be frustrating, but the combat system is intricate and engrossing
Entertainment
This is a great accompaniment piece to the animated show, with a few notable problems that hold it back from greatness
Replay
Moderate 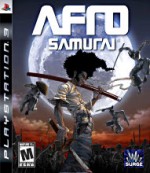