A Boy and His Blob Review It’s easy to let nostalgia for the property – or for 2D side-scrolling platformers – blind you while playing A Boy and His Blob. The reimagining of the 1989 NES title had throngs of gamers aflutter upon announcement, conjuring memories of a game shrouded by time and the mask of childhood. Having finished the hefty remake, I can safely say that fans and newcomers alike will be impressed. But like its predecessor, A Boy and His Blob isn’t without its frustrations.

The key elements of the classic version have been left untouched; the new iteration is primarily an avenue for higher production values. Twenty years later the boy and his newfound friend are still working their way across the universe to save blob-kind. No other story elements or plot points are needed; after the pair’s initial encounter, the ingenious gameplay takes center stage. Blob can change into 15 unique objects by eating aptly named jelly beans. Some of them become mainstays, such as the Licorice Ladder or the Tangerine Trampoline. Others offer a breath of fresh air, completely changing the way you approach platforming.

WayForward did a fantastic job easing players into the ever-evolving skill set, using signs and simple introductory scenarios to challenge the player and force them to shake up their problem-solving arsenal. In earlier levels, water is a deadly obstacle for the boy. After obtaining the Bubble Gum Bouncer, water no longer poses a threat and new doors open to you. Still, levels are designed to continually challenge; once water is no longer a problem, new obstacles await. Blob has more, increasingly interesting forms that I won’t spoil for you, and each feels more of a treat than the last. Nothing stays simple for too long.

You’ll have plenty of time to master these new skills (or die trying) because the game offers a massive amount of content, spanning 40 levels. To top things off, each level also harbors three treasure chests, and nabbing them all will net you access to a challenge level. Find all the hidden chests in the game and you effectively double your playtime. That’s a lot of bang for your buck.

Sadly, the stunning graphics, charming music, and endearing characters don’t mask the game’s faults. While the puzzles are nothing short of ingenious, you are always one treacherous step away from infuriation. I have no qualms about being stumped from time to time. The issue is when that eureka moment finally comes, progression can be halted by a series of obstacles that require perfectly timed jumps with even more exact trajectories. At times it takes dozens of attempts to string together a combo of moves to make it across an extremely short expanse. With a very forgiving save system, this doesn’t often become an issue, but in several particularly challenging areas with falling platforms and walls lined with floating mines, the frustration was nearly game-ending. The twitchy controls, particularly when flying, compound the problem. After 15 or 20 minutes of repeating a 10-second string of actions, all I could do was step away and put the game down for another time and disposition. A clear mind and calm hand is needed at all times.

Despite these problems, there is something undeniably magnetic about the game. The lush environments, charming characters, and the infinite power of the hug button make it impossible to stay upset for too long. Like its namesake predecessor, a couple of days after setting the controller down, it’s hard not to look back on A Boy and His Blob and smile.

8
About Game Informer's review system
Concept
Reimagine the classic title, taking steps to avoid the pitfalls of its predecessor
Graphics
The hand-drawn and animated graphics shine. You won’t get tired of looking at the beautifully designed and diverse environments
Sound
Cheery and uplifting — a perfect fit for the atmosphere of the game
Playability
A deceptively simple concept masks challenging and sometimes frustrating gameplay
Entertainment
Charming and innovative, but expect to walk away exasperated a handful of times
Replay
Moderate 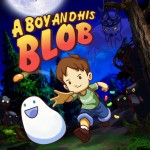