Imitation may be the sincerest form of flattery, but it can also lead to kick-ass rip-offs. 3D Dot Game Heroes is an unapologetic tribute to The Legend of Zelda, tempered with tons of NES-era nostalgia and refreshing, simple presentation. Without the distraction of forced innovation, From Software has successfully refined the classic formula to pure retro –gaming –bliss.

3D Dot Game Heroes simultaneously looks like everything and nothing you’ve ever seen. Its unique graphical style expands classic 2D sprites into the third dimension. Every single object in the Kingdom of Dotnia is composed of tiny 3D cubes. The stunning shading and particle effects make the game resemble the masterworks of a video game-obsessed LEGO architect brought to life. Motivated adventurers can flex their own creativity in the accessible hero editor, or choose from dozens of preassembled characters like a shark, ninja, or funky Santa Claus. Putting the time into making a great-looking hero heightens ownership of the brilliant adventure to come.

Whichever character you choose, 3D Dot Game Heroes plays like a version of Zelda that aged as well as your fond memories of the series. I’ll spare you the details on the story and gameplay, because you’ve done the dungeon-crawling, puzzle-solving, boomerang-slinging song and dance before. All you need to know is that it’s still fun.

Where 3D Dot Game Heroes departs from the core Zelda formula is in its challenge. Simply navigating the overworld from dungeon to dungeon can be perilous and confusing, but that difficulty makes finding your destination that much sweeter. Clearing dungeons requires tremendous concentration and patience, but if you’re a true Zelda fan you’ve been training your whole life for this. If you’re worried about wracking your mind on a single puzzle for an hour, fret not: They’ve been expertly crafted. Boss difficulty, however, is inconsistent. A huge dragon chewed on me for about an hour, while a towering knight didn’t so much as scratch me. Gamers expecting a wistful romp through a bizarro Hyrule are in for a surprising amount of game overs, but each will only strengthen your resolve.

The game controls similarly to the top-down Zeldas. Staunch traditionalists are free to –navigate the fields and dungeons of Dotnia with the d-pad, but I’d recommend the analog stick. Before you recoil at my retro gaming-blasphemy, you should know that improvements have been made to the primitive Zelda swordplay. Many of the game’s numerous weapons allow 360 degrees of attacks, which the analog stick –slickly –supports.

Speaking of swordplay, do you remember how in the early Zelda games your sword shot lasers when you had full health? That mechanic returns here, but some blades nearly fill the screen. For example, the fully-upgraded katana lacks width but can cut down baddies from clear across the screen. Combine this with the spin attack and you’ve got power that makes the master sword look like a pocket knife. Your weapon’s ability at maximum vitality creates an engaging struggle to always remain at full health. When you’re reduced to your regular armament, the game becomes a tough, desperate romp which coaxes from you the dormant Zelda skills –necessary to survive.

This shrine to Miyamoto doesn’t come without its faults. Sometimes the dungeons’ fixed camera perspective obscures a vital path, which can halt progress for hours. Additionally, your character’s collision box doesn’t correspond to its onscreen model, which can lead to unintuitive snags on geometry and misjudgments regarding whether you’re the right size to squeeze through a narrow passage.

Ultimately, 3D Dot Game Heroes combines the original Legend of Zelda’s world with A Link to the Past-style gameplay, which proves to be an absolute blast. What the game lacks in originality it makes up for in nostalgic humor, polished gameplay, and length, clocking in at around 20 hours for non-completionists. No self-respecting Zelda fan or retro gamer should pass this one up. 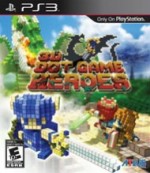