Games have a hard time being funny, because they sort of have to play it straight. Although good writing and editing can make a game funny in the traditional sense, the “joke” of a wonky control scheme or level is usually at the player’s expense, which makes it hard to tolerate. It’s Anecdotal’s 39 Days to Mars feels like a series of “jokes” in exactly that vein, and while it does an admirable job of getting some genuine laughs out of the way you interact with it, it’s not enough to make the journey memorable.

The story follows 1800s explorers Sir Albert Wickes and The Right Honourable Clarence Baxter, who decide on a whim to fly a steampunk spaceship to Mars. They need to prepare for the journey by taking care of the little things, like nabbing a key hanging from a tree, or finding the map. Although there isn’t much a of narrative, the affair has a charming, understated tone to it, as Albert and Clarence display a casual indifference to both the enormous task of getting to Mars and the life-threatening complications they encounter along the way.

Of course, the key isn’t just hanging on the tree, nor is the map laid out before you. Each menial task on the way to Mars is an intricate puzzle you coordinate with a friend to solve. To get the key, for example, players rotate one of two wheels that moves a hook and wire horizontally or vertically along a short maze to retrieve it without touching the edges on the way back. To assemble the map, both players have to hold a piece and rotate it into place.

The controls for each of these puzzles are simple in practice, but take enough getting used to that you spend as much time fumbling with different switches and objects as they do coming up with solutions. As the puzzles become more involved, they lead to comedies of errors, where one player might have a good grasp of how to move a claw that mines coal, but the other is incapable of operating the bicycle it’s attached to. That might sound frustrating, but it makes for some fun laughs at your buddy’s (or your own) expense as you flail your way to a solution. Thankfully, none of the puzzles are so devious that you have to sit there and problem-solve for long; the trick is usually in figuring out how to properly implement a simple solution.

Unfortunately, the triumphant moments don’t linger too long. While it’s fun to solve puzzles as a team, none of them are tricky or memorable enough to provide a true sense of accomplishment. You can run through every puzzle in about 90 minutes, and the ending arrives just as the ideas at play start picking up. This made me hungry for more fun experiments, but ultimately unsatisfied.

I’ve talked about 39 Days to Mars as a co-op adventure not because you can’t play it alone, but because you shouldn’t. The puzzles are clearly designed for two players (even the single-player option in the menu suggests playing co-op), and the haphazard fun of mucking around with some of the stranger contraptions with a buddy turns to serious frustration when playing alone. The puzzles are identical in both modes, and since most require multiple deliberate, simultaneous actions, keeping track of two cursors and buttons simultaneously makes problem-solving laborious.

As a result, most puzzles wear out their welcome far more quickly as you try to wrap your head around these intricate contraptions. Testing your coordination with unintuitive control schemes in arcade-style games like QWOP is one thing, but because here you’re working toward definite, finite solutions, I felt less like I was testing myself and more like I was struggling just to move a simple puzzle piece around. I didn’t even get the fun of laughing at someone else’s screw-up, then working with them to accomplish something.

39 Days to Mars does a better job of relaying comedy through gameplay than most games, but the “jokes” it tells aren’t worthwhile. Little is terrible about the core concept or its execution (aside from the awful single-player mode), but nothing was outstanding or notable, either. I had a few laughs with the people I played, but by the time I reached Mars, I was ready to just shrug my shoulders and go back home. 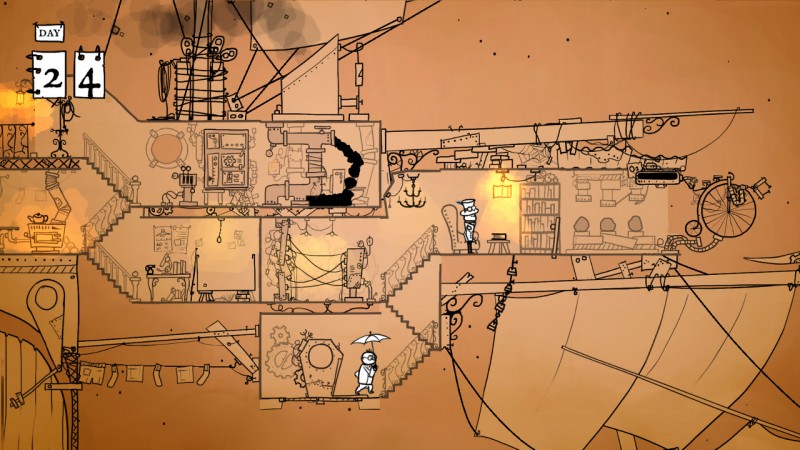 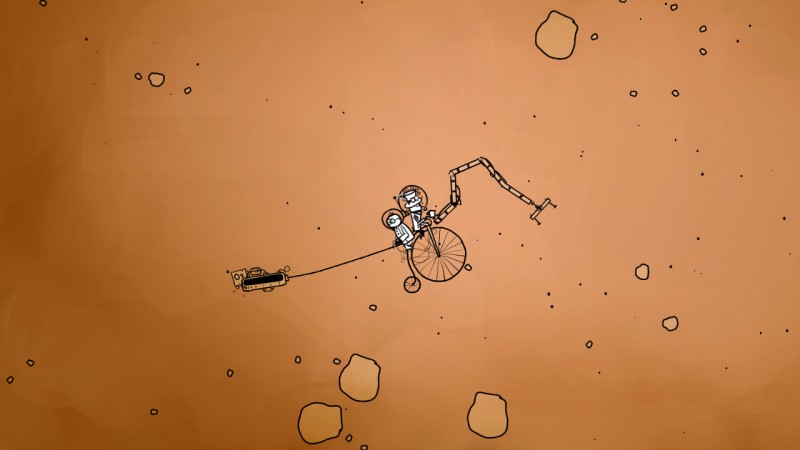 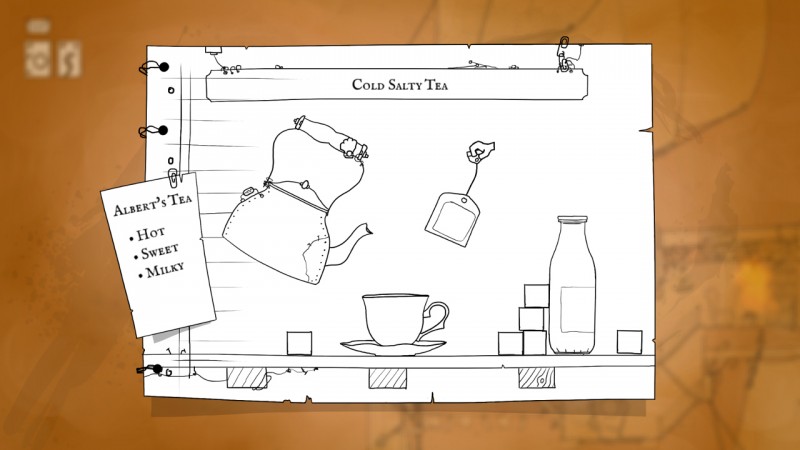 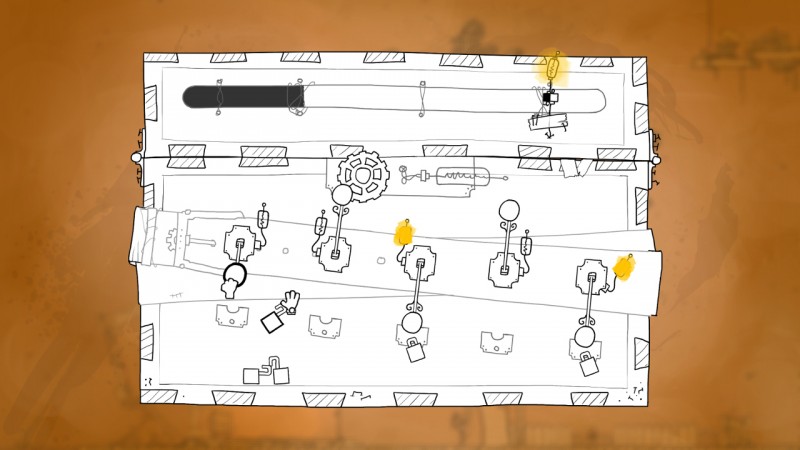 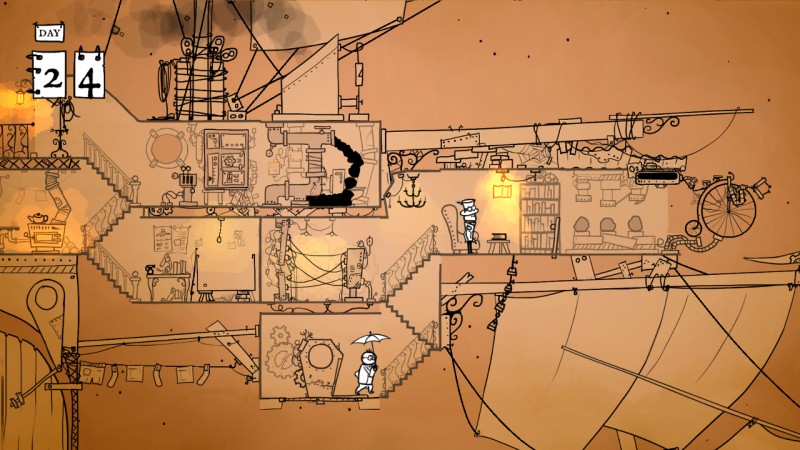 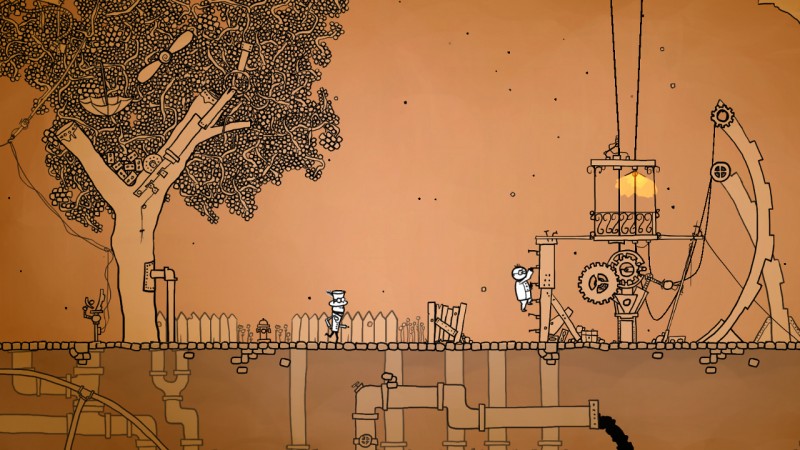 39 Days to Mars’ premise is promising, but its short runtime leaves lots to bedesired, making for a fun but ultimately forgettable romp.

Purchase More Info
6.25
i
Game Informer's Review System
Concept A cooperative, slapstick puzzler where both players fiddle with switches, tea kettles, and bicycles on their way to Mars
Graphics Thin lines and simple hues give most puzzles a nice hand-drawn look, and the interiors of houses and ships are impressively detailed
Sound The music is largely understated, save for a few swells towards the end. The voice acting is passable, but the repeated quips are grating
Playability Every puzzle has its own wonky control scheme. This makes figuring out how each one works half the fun with a friend but a chore when playing solo
Entertainment 39 Days’ premise is promising, but its short runtime leaves lots to be desired, making for a fun but ultimately forgettable romp
Replay Moderately Low