The World Cup is highly anticipated, not only for the chance to see the best soccer players in the world face-off cloaked in national pride, but because the tournament happens only once every four years. This FIFA title lacks the World Cup's scarcity. Including FIFA 15 coming this fall, EA is giving fans three FIFA titles in one year. World Cup Brazil has its advantages, but it's stuck in an awkward position. It's not the best representation of all the tournament encompasses, and in some ways it's not even better than FIFA 14.

Then again, World Cup Brazil is not a dud. The game contains more features than any of the previous titles centered on the tournament, and even includes enhancements on FIFA 14's gameplay. Headers are improved both by defenders' increased ability to win the ball in the air as well as new strategic options for corner kicks. Developer EA Canada also worked on streamlining player movements after receiving the ball in order to make acceleration more fluid.

These are tangible improvements, but they only tell half the story since those gameplay areas still need work. Headers may now have more possible outcomes, but it still seems like the outcome is determined before the ball is kicked into the air. Player movement is smoother, but there are still times when players inexplicably fail to detect the ball at their feet or lack any awareness regarding the ball or teammate location. The latter is particularly frustrating when you're trying to clear the ball from your in front of your goal and teammates are clustered too close.

If the gameplay is a zero-sum when compared to FIFA 14, the title's World Cup-related accoutrements are welcome, but not significant. Training between friendlies and matches in the Road to the World Cup mode gives you strategic options as a manager. Do you use the pre-tournament matches and training sessions to build up younger players so they can crack the World Cup roster later on, or do you simply maintain the form and morale of already-established players?

Despite elevating the importance of training, like previous World Cup titles, this game doesn't do enough to convey the entire experience. The skill games are hardly interesting, no drama exists in the roster selection process or with your players, and there's not much weight conveyed to the qualification process. FIFA 14's headline-driven career HUD does a better job of livening up the day-to-day experience, and while there are added presentation elements like a radio show and new cutscenes of fans, they are tidbits that are drops in the bucket. In terms of new World Cup capturing modes, Road to Rio de Janeiro takes on the series' popular Seasons format, but it's not a destination feature.

You've probably heard of World Cup Fever. What is it? You know it when you've got it, and this game doesn't raise the temperature much. 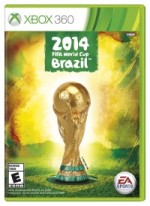 It’s not the best representation of all the tournament encompasses, and in some ways it’s not even better than FIFA 14.

Purchase More Info
8
i
Game Informer's Review System
Concept Add some mid-season adjustments without being as good as FIFA 14
Graphics The manager models look a little bloated, but at least they are there
Sound The special podcasts are cool to hear even though the commentary itself is not very specific. It’s talk for talk’s sake, which is sports radio in a nutshell
Playability Gameplay additions to headers, corners, and general movement are noticeable
Entertainment Unless you haven’t touched the series since the last World Cup, this game is not essential
Replay Moderately High