James Bond’s history in video games features titles with just about every level of quality. You’ve got classics like GoldenEye, a solid outing with Everything or Nothing, passable entries like Agent Under Fire, the mediocre GoldenEye: Rogue Agent, and plenty in between. Near the bottom of that list is 007 Legends, a mess of a title that’s uninspired at best and nearly broken at worst.

Its problems aren’t any fault of the concept, which is novel if a bit nonsensical. In a scene showcased in the trailer for the film Skyfall, Daniel Craig, as 007, falls off a train. At the beginning of 007 Legends, this causes Bond’s life to flash before his eyes, which plays out in the game’s five missions (each based on a different Bond classic). If you get past the fact that this doesn’t make any sense (considering Casino Royale effectively reset the franchise with Craig as a young Bond), it isn’t a bad idea. The film franchise has so many memorable moments and villains, and paying tribute to them could pay off well in a video game. Except it doesn’t.

When everything is functioning correctly, Bond does little more than follow onscreen indicators that basically scream “PRESS THIS, SHOOT THIS, HACK THIS” at every turn. You’ll occasionally do a basic investigation of a baddie’s office or trudge through awful stealth sections, but the bulk of the gameplay is as cookie-cutter shooter as they come.

Above: Trailer for the Goldfinger mission

Each of the showcased Bond villains receives the same terrible quicktime event boss battle. You’ll press an analog stick up or down to punch them until a life bar depletes, and occasionally tap a button quickly to disarm them. You’re never in danger during these – most bosses can’t even hit you once.

It’s a bad game when it’s working, but there are plenty of moments that make you wonder how it even got cleared for release. Enemy AI frequently freaks out, causing soldiers to endlessly sprint against walls (often firing their guns at the ground). At one point, the framerate dropped to unplayable levels, except it wasn’t during a firefight – I was just walking around. The visuals are cheap, with doorknobs drawn onto textures like this was a Nintendo 64 game. As I entered one room, enemies materialized out of thin air and dropped to the ground in front of me. These troubles carry over to its simple multiplayer mode, which features lag, terrible character animations, and an upgrade system that can’t even clear the “poor man’s Call of Duty” bar.

Everything about this experience points towards a rushed development that focused on releasing the game close to the film’s opening. Rocksteady has shown us that a great IP can make for a great game if given the appropriate development team. The world of James Bond seems custom-built for an awesome gaming experience, but Activision seems intent on making every possible wrong turn with 007 Legends.

4
About Game Informer's review system
Concept
Draw inspiration from the James Bond films, and then make them terrible
Graphics
Everything looks cheap, with clipping and animation glitches throughout
Sound
I honestly thought I heard grunting sound effects from Mortal Kombat on Genesis
Playability
Even when the game functions, it’s thoroughly unenjoyable
Entertainment
This game is sure to disappoint FPS fans and Bond aficionados alike
Replay
Low 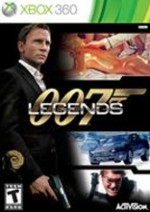