The Long Road To Beatdown City

<
One promising indie’s arduous journey draws to a close

The Long Road To Beatdown City

Every day it seems like there’s a new promising game concept being crowdfunded by an excited audience willing to take a chance on it. Back in 2014, Treachery in Beatdown City was one such project. A unique fusion of beat ‘em up and turned-based RPG battles, it began life as an homage to brawlers of old like Double Dragon. Former Rockstar Games alumni Shawn Alexander Allen started working on art for the project in his free time in 2009 and says he yearned for beat ‘em ups to make a comeback. Early designs for the game weren’t panning out and then he struck upon the idea to combine brawlers with another favorite genre: RPGs.

“I was dejected because things were taking longer than we had hoped to get something going,” Allen says. “After a day of work, when I was in the shower, my love of RPGs like Super Mario RPG, Hybrid Heaven, and Fallout 3 coalesced into this exciting moment where I shouted, ‘It’ll be turn-based!’”

The fruit the combination has borne is a rich one. Billed as a “dark comedy action thriller,” Beatdown City has you playing three fighters (a boxing expert/MMA fighter, a pro-wrestler, and a capoeira/Jeet Kune Do martial artist) as they attempt to rescue President “Blake Orama” from Ninja Dragon Terrorists. The game gleefully sings the praises of the genre that inspired it but its RPG leanings also result in something unique and promising.  A typical stage plays with your character moving down the street as they would in a brawler but the action slows down to a tactical pause with the press of a button. When engaged in fisticuffs with foes, you can slow things down VATS-style to pick out yours moves carefully, choosing when its best to go with basic moves or expend a significant amount of FP (Fight Points, essentially Beatdown City’s version of mana) to unleash a furious combo on a foe. During the course of the game, which Allen says should take around 12 hours, characters will grow more powerful, gaining new skill thresholds that let them unleash even stronger attacks.

During my brief time with a preview build, I had fun navigating the eponymous Beatdown City – a place that’s resemblance of New York is not coincidence. “A lot of the game’s background art is heavily stylized versions of actual locations [in NYC],” Allen explains. “I did a lot of photography, but then decided to straight up use Google Maps as reference. Often I use a specific juxtaposition of empty stores butted up against thriving banks and poser bars to tell the story of a town that is going through a tumultuous time.”

“You can see all of this as you walk through areas inspired by Soho, the Lower East Side, Downtown, the FDR Drive, and Chinatown, and as you move past bank sponsored bike shares, save at Halal carts, and chat with beret-wearing vigilantes who helped keep the city safe decades ago.”

As a fan of tactics games, Treachery is simplistic but fun, with pleasing animations and sound effects that reward you for raining blows down on a foe. The art style is also meticulously detailed, with stores and apartments in the background. These are unique and plentiful enough to make it feel like this is a lively world even if all you’re doing is moving down a screen and getting into brawls. I’m curious if the combat and progression system can remain exciting for the length of the entire adventure but there’s a load of bloody potential here. 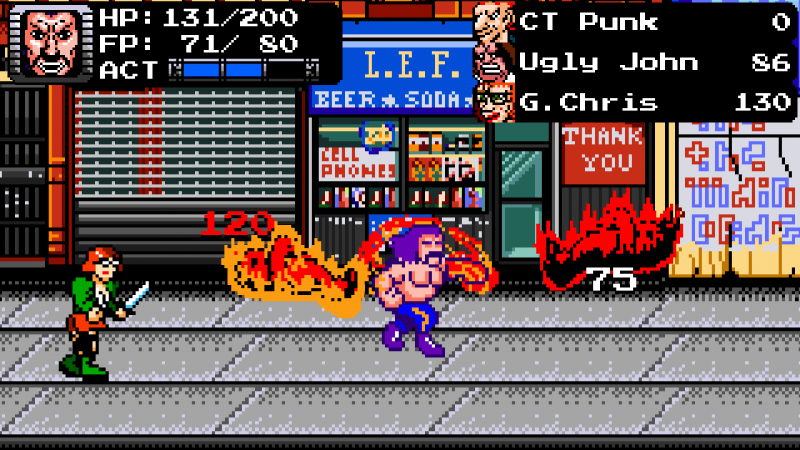 For the past few months, Treachery in Beatdown City has been making the rounds at shows, earning a fair amount of buzz (including a placement on our Best Of E3 indies list) for its gritty throwback visuals and novel gameplay. With a release on both PC and Switch slated for 2019, Alexander and his small team (comprised of engineer Nico Marcano, composer Inverse Phase, as well as art and design contributions from Diana Santiago) are in a prime position to capture the attention of anyone who’s yearned for the days of brawlers or just wants to throw some bad guys around.

Things haven’t always been this shiny for the team though. Allen initially planned to debut at least part of Treachery In Beatdown City on PlayStation Mobile, an initiative designed mostly to bring unique titles to the Vita. After PlayStation Mobile winded down, Allen and company launched a Kickstarter campaign for Treachery In Beatdown. The campaign failed, netting $21,343 of the $50,000 goal.” It was crazy when we first failed,” Allen recalls. “Very public. We had a bunch of people asking what we were gonna’ do.” Quitting wasn’t really an option though. “Both Nico and I had left the biggest AAA company in NYC to make this game, and there just wasn’t much in the way of a job market in the city, so this game represented our future doing what we always wanted to do – making awesome games.” After getting a second wind from developers and press who loved playing the build of the game, Allen and Marcano gave Kickstarter another shot. Boosted by social media shares, Treachery In Beatdown met its goal this time, earning $50,473 in April 2014. However, the game still had a long way to go. 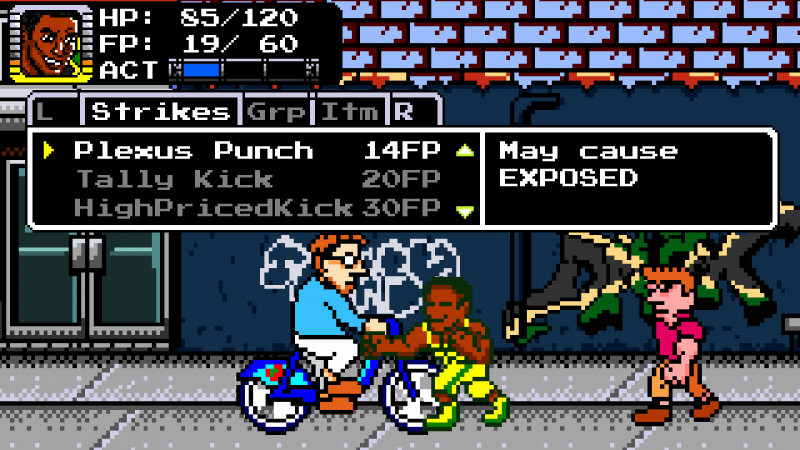 “My Kickstarter was a last ditch effort to keep the game going,” Allen admits. “At the time I had been working on the game for a couple of years, and we needed money to keep going. I thought I knew everything I would need, but didn’t take into account things like life events which threw off everything about the project. Also, I thought just working more hours, and working ourselves into the ground was sustainable, and it really is not.”

Allen, who handles design, art, animation, marketing, and more on Treachery, speaks with frankness about the negative effects that development had on his personal life and likewise how that negativity extended the development. “When we succeeded [with the campaign], it meant that I felt that every second I wasn’t working, I was slacking off. This made me stay home more, sit at my computer as much as possible, sleep way less, and basically sent me into a spiral of emotions that strained all of my relationships. In 2015 my marriage was over, I was scrambling to live, and that in turn distracted me from game development. I was defeated, and it took accepting that defeat, figuring out what we needed to do in order to move forward, and doing just that to right the ship.” 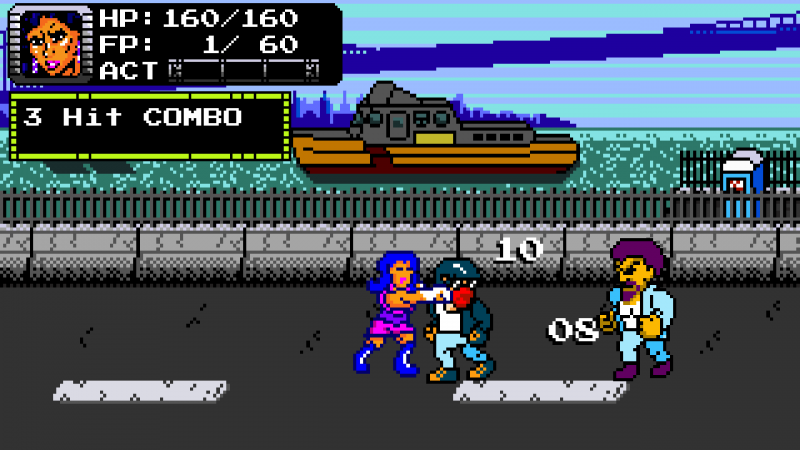 Extreme stress and a series of setbacks are more than enough to sink any project. However, Allen, Marcano, and company have continued to develop Treachery out of stubbornness and passion, seeking to create the best version possible of this tactical puncher. This means constantly tweaking and overhauling combat mechanics and even deleting content, like planned vehicle levels.  “I think I have just understood the game more, and worked to make sure that our encounters are really as satisfying as they can be. We don’t want there to be a lot of filler. Everything has a reason for existing.”

With more than four years since the game was successfully funded (and a decade since it was conceived), Treachery is finally nearing the city limits – and with a fair amount of anticipation too. “Beat ‘em ups are coming back into style,” Allen asserts, “and it’s apparent that people miss the genre. At the same time though, it’s a great time to reform what the genre is, and as a very new kind of game, Treachery in Beatdown City sort of feels timeless.”

Though development is almost done, Allen says the team isn’t taking a breather yet. “Gamemaking is hard, and much like a great mentor of mine once said, it’s not about where you start, but rather the journey. Having a launch in sight is amazing – we’ve gone through so much that it can be almost impossible to believe. It’s also the hardest part of the journey. We aren’t resting yet.”

Disclosure: The author backed Treachery In Beatdown City in April 2014 during its Kickstarter campaign in the amount of $3.50. He received no rewards for his backing.