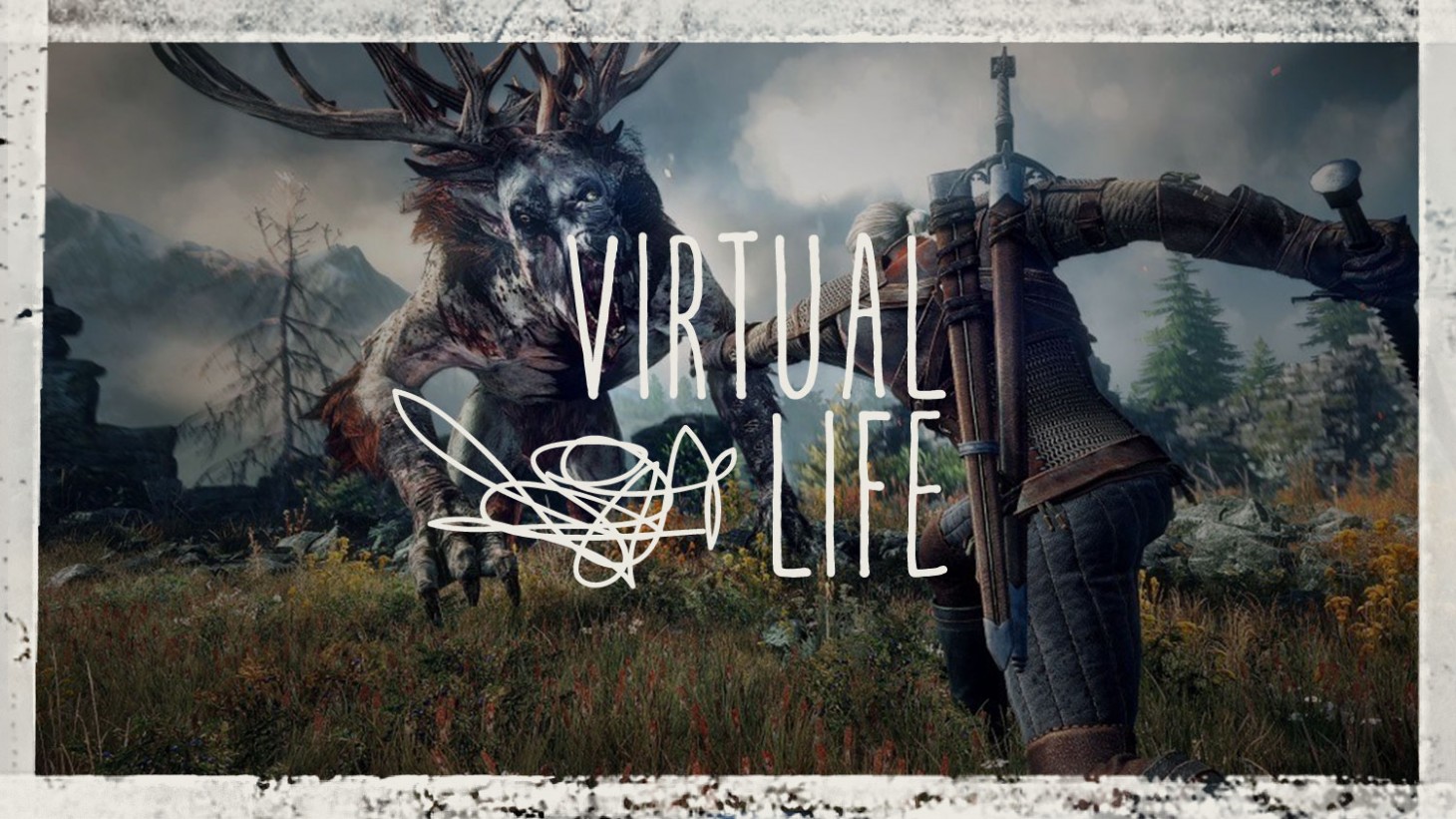 The Beautiful And Terrifying Violence Of The Witcher

I just wanted to play cards.

Everywhere Geralt of Rivia goes, he's beset on all sides. By monsters. By his tangled love life. By political conspiracies. By the specter of a missing (adopted) daughter.

But mostly, he runs into idiots. Bona fide, dumber-than-a-bag-of-hammers morons looking to take out their rage on whatever emotional conductor is nearby. Given the racism-charged landscape of Nilfgaard and Redania, our hero, a human who's been mutated into a sword-swinging Terminex employee by his hard upbringing and constant potion consumption, often finds himself in the position of being a would-be plaything for these frustrated buffoons.

While yes, our white-haired dad should be looking for Ciri and trying to cure the land's ills, most of the time when I'm playing The Witcher, Geralt's just doing odd jobs or collecting cards. That's right, kids, Geralt's got designs on being the best darn Gwent player that ever was. The vast majority of my playthrough has been dedicated to battling lodgekeepers, merchants, and random civilians to steal their precious cards from them. But there's always, always someone who wants to ruin the fun by drunkenly pushing the Witcher or trying to take coins from him.

And that's when the sword comes out the sheath with a hiss.

Most violence in video games feels the same, often constructed to be a disturbingly satisfying loop of grotesque entertainment with pleasurable feedback. You put your crosshairs on a bad guy's head. You pull the trigger.  A rumble shakes through your controller. The head goes boom and splashes the area in gore as the body falls funny toward the Earth. 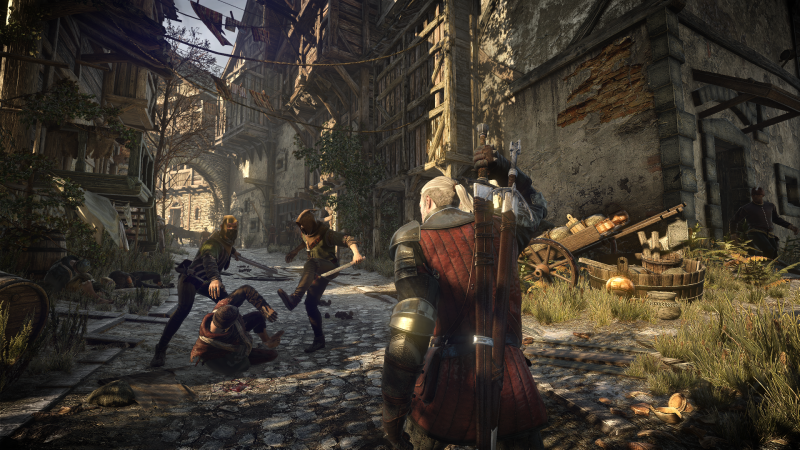 Rarely do games ever escape this cycle – the mechanical and polished presentation of violence in which you perform an action and are rewarded for it with a spectacle that's justified by the plot. Sometimes you're killing invaders or destroying armies for the objective good of the universe, but in the end, most of the time in games violence passes as the absolute, correct course of action. In recent years, games like Spec Ops: The Line and Far Cry 3 have been a little bit smarter about this whole grisly structure, often criticizing you with a lot of handwringing about what a bad person you are while encouraging you to still go on killing sprees and offering you no other path to progress outside of wantonly murdering anyone who gets in your way. It's uncommon for games to strike a balance between these extremes, acknowledging the darker side of finding joy in violence alongside not taking you to task in an ultimately toothless way.

The Witcher 3 is such a game, with violence that confesses to its own brutality, often putting the onus on you for engaging without being obnoxious about it.

There are often three bandits that try to pick a fight with a Witcher. Sometimes more, sometimes less, but most of the time it's three idiots, usually in a tavern, usually right after I've won a card off someone. When the blood spills, it's a quick affair. The sword leaves the leather holder and with a quick upward swing, one of the fools has quite literally lost his head. The fleshy sphere flies through the tavern, spinning wildly, spurting red in every direction as the rest of his convulsing body is dragged down by gravity.

The second bandit makes a play with his beating stick. Geralt responds in kind by casting an Igni sign, a jet of flame spewing forth to burn him alive. The man's still howling, flames devouring his skin, when our Witcher spins and puts the final guy down with a crossbolt to the eyeball.

All of this happens in 10 seconds.  An immense satisfaction comes from the power at my fingertips. However, the game also takes me to task for it in ways that don't feel like a teacher scolding me. Civilians scream as Geralt sheathes his sword and the extinguished lives pool red on the tavern floor. One of the bar's occupants screams, calling Geralt a freak. Another begs for his life. Of course, it didn't have to play out like this.

I could have made him run away, out of the tavern, paying the cost of a little pride to avoid bloodshed. But why should Geralt have to deal with their crap? Why should he be a pushover? Because there's supposedly some sanctity in the lives of his oppressors? Because Witchers already have enough of a bad name? There are a hundred reasons not to kill people.

But my Geralt doesn't give a damn, to be frank. He's tired and angry and just wants to live his life in relative peace. When people disturb that peace, they pay the price. Simple as that. And yet there's a cost to that choice.

A few in-game weeks down the line I run into a group of townsmen who know its me who slaughtered their peers. They unsheathe their swords, hoping to honor the memories of their comrades by killing the man that slew them. They don't even last five seconds. Suddenly my hasty, violent response in that tavern from earlier has not just claimed three lives, but six. 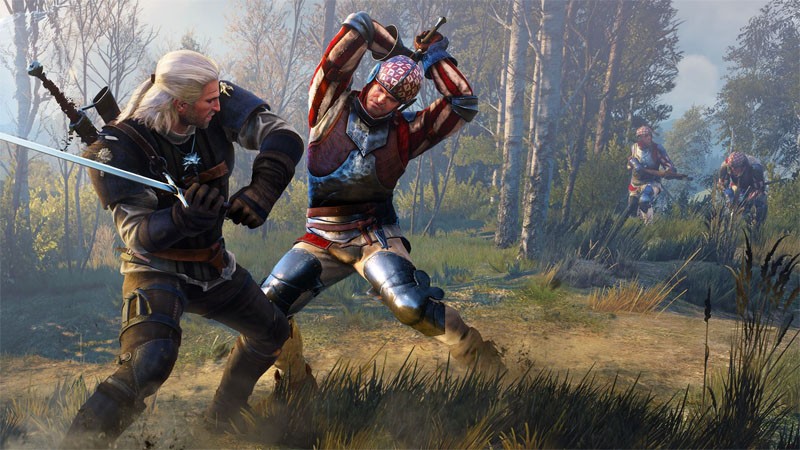 The Witcher's violence feels natural, an action that occurs in a morally ambiguous space and gives rise to reactions from the world that are equally natural. There is no bad guy getting in my face, preaching to me about how I'm just as evil as him. The game has enough well-constructed systems and is confident enough in those systems to let me come to my own conclusions about who my Geralt is and how I'm shaping him.

I often feel like games forgo the interactivity part of their experiences to make points about violence or political themes, messages that are often muddled at best due to thematic clashing. There's remarkably little in The Witcher 3 that holds your hand; it doesn't tell you violence is bad or that the oppressed don't have a right to fight back with whatever they can arm themselves with, but the game doesn't tell you vice-versa either.

Instead,  the Witcher gives you the tools to map our your moral compass in all things. How much do you haggle for your jobs? Do you do charity? Do you forgive easily? Do you find joy in helping people around you or is survival your main priority? To find the flexibility in how these systems stretch to the game's violence is refreshing, especially in an industry that makes mostly violent games that do nothing of interesting with their violence.

The Witcher 3 continues to be one of the most impressive games ever made, recently nabbing the tenth spot on our Greatest Games Of All Time list, (as well as being crowned the greatest game of all time by our readers) we'll likely see its innovations passed on to RPGs in the years to come. I hope that developers take the game's approach to violence to heart and find more ways to let players determine their relationship to violence without being preachy or ignoring the matter altogether.

For more on The Witcher 3, be sure to check out our review here. 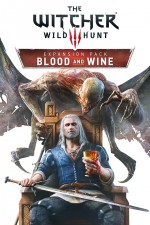