Mortal Kombat creator and NetherRealm Studios chief Ed Boon has been known to tease projects and announcements on Twitter. Yesterday, he strongly hinted that a fan-favorite title might be getting a coat of paint for download services.

Mortal Kombat: Shaolin Monks was an action game starring Liu Kang and Kung Lao. Familiar characters from the Mortal Kombat universe aid the pair, while villains like Goro, Shang Tsung, and Mileena stand in their way as bosses. The title featured an application of the duo’s fighting game move sets, including fatalities. We’re keeping an eye on this, and we’ll update once we know more. If you're interested in learning more about the game, you can check out a Replay from May 2011.

Our Take
Most of the Mortal Kombat spin-off games were pretty bad. Shaolin Monks was a standout title, though. It controlled well, had an interesting story, and smartly applied the concepts of the fighting game in a beat-em-up/action setting. I’m very hopeful that Boon isn’t reaching into our chests and playing with our hearts. 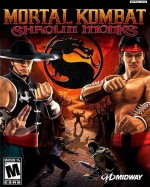