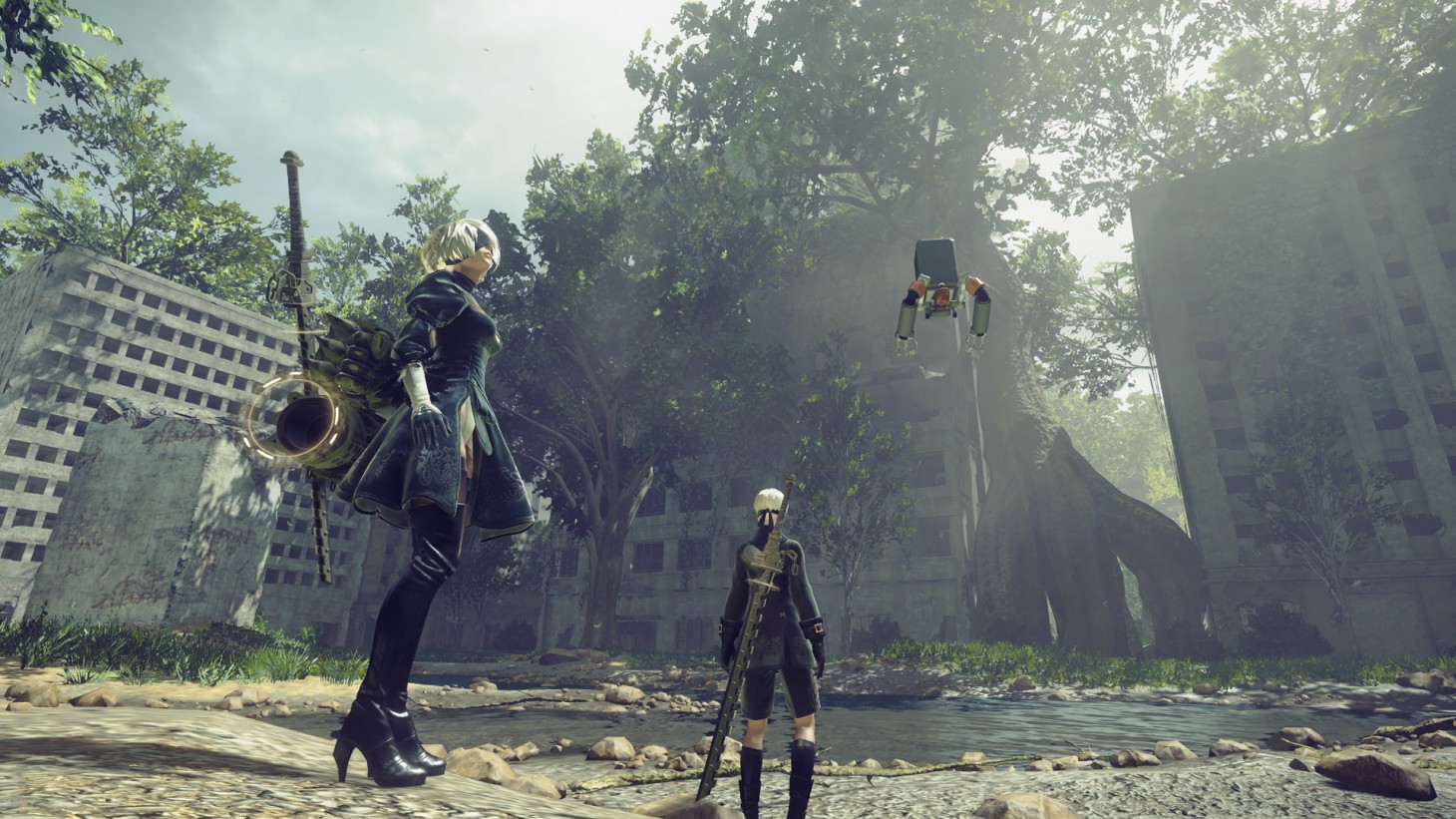 Opinion – Give Me More Weird Masterpieces Like Nier: Automata

2017 has been absolutely mad in terms of quality game releases. The Legend of Zelda; Breath Of The Wild, Resident Evil 7, Super Mario Odyssey, Wolfenstein II: The New Colossus, Yakuza 0, Horizon Zero Dawn, and so on. However, the game my mind has been jumping back to the most this year is Nier: Automata, a game about androids waging a proxy war with robots on a devastated Earth. In the absence of humans, these androids have no guidance for their emotions, nothing to help them understand sexual longing, despair, and the trials of friendship. Also, it's a game where you get to run around and slice through robots with a giant katana, so that's nice.

Nier: Automata is not perfect. It looks like a last-gen game, the combat is serviceable at best, and some of the dialogue is super cringey. However, I can honestly say that I've never had an experience quite like it. Automata, like its predecessor Nier, requires you to play through the game multiple times to get the "true ending." This in itself isn't rare in the world of games; the Zero Escape series requires multiple playthroughs to earn a canonical ending, for example. But Automata's approach to this structure is intriguing. Not to get too heavy into spoilers, but every playthrough isn't just "repeat the entire game over again." Instead, playthrough 2 finds you repeating the events of the first playthrough from the perspective of another character, and beyond that, further progress reveals entirely different scenarios and chapters.

Automata makes a very dangerous play that many games often do, forcing you to relive certain scenes over and over again to drive home a thematic point about the endless repetition that is life and the mundane brand of despair inherent in that. Mafia III took a similar tact, creating a 30-hour revenge story centered that hinged on repetition of action to drive home the futility of vengeance. However, that repetition proved to be the game's Achillies' heel, since so much of Mafia III's storytelling is cinematic, and not emergent, and thus you could more or less get the same story if the game was 10 hours. However, Nier justifies its repetition by having us jump from character to character and witness events we already know that will happen, like a major antagonist dying or a plot revelation, but we get to experience another character's perspective and emotional reaction. For example, the character in playthrough 2 is able to hack into robots, but also into any emotions that might be there. So a boss fight that is interesting and cool in playthrough 1 becomes a tragic short story in playthrough 2 as we get to see how that character's situation came to be via flashbacks. If you haven't played the game, and don't mind spoilers, you can watch the differences right here:

Through Automata's long and intriguingly structured story we bear witness to multiple androids trying to become human in a time of despair. The protagonists' stories are heartbreaking, part-romance, part-self discovery, and mostly tragic except for a bit of light that makes it in at the end. “A future is not given to you," one character says to the other. "It is something you must make for yourself.” It's there that Nier Automata lays out its aching heart and hopes for people who valiantly struggle with self-identity while also trying to break out of loops of tragedy. Even the "villains" are presented as deeply sympathetic characters capable of grieving and wishing for a better world.

Amidst all of this, we also get fantastic action-packed sequences that project both scale and intensity, like the game's opening, with mechs zooming across dead oceans and through rusted factories as drums bang loudly in the background and a chorus wails.

It's a fantastic sequence that properly gives way to everything Nier is about, with your commanding officer being zapped to oblivion seconds into the game, and 2B musing over how she and 9S (as well as all of us) are trapped in cycles of life and death. To drive home this theme is the fact that the first save point is about 90 minutes down the road from the intro. If you die before then, you have to restart the entire game. A risky move, but also a daring, thematically resonant design choice. At the end of the day, I think that's what I respect about Nier: Automata the most; it's not afraid to annoy you, make you sad, or piss you off just to drive home its themes.

Nier: Automata might not be the best game that came out this year, but for me, it's the most memorable and daring, one that balances profound storytelling with the structure and tropes of video games. Is it a little too long? A little too convoluted? Sure. But give me Interesting-And-Flawed over Polished-And-Bombastically-Dull any day of the year. I want to see more games with Nier's courage when it comes to portraying suffering people as characters capable of both great power and being just as lost as the rest of us. Let's hope that the game's strong financial performance encourages developers from all sectors of the industry to take bold risks in designing memorable, heart-breaking adventure games like Nier: Automata.

For more a spoiler-heavy deep dive into Nier Automata, check out our Virtual Life column on the game here.