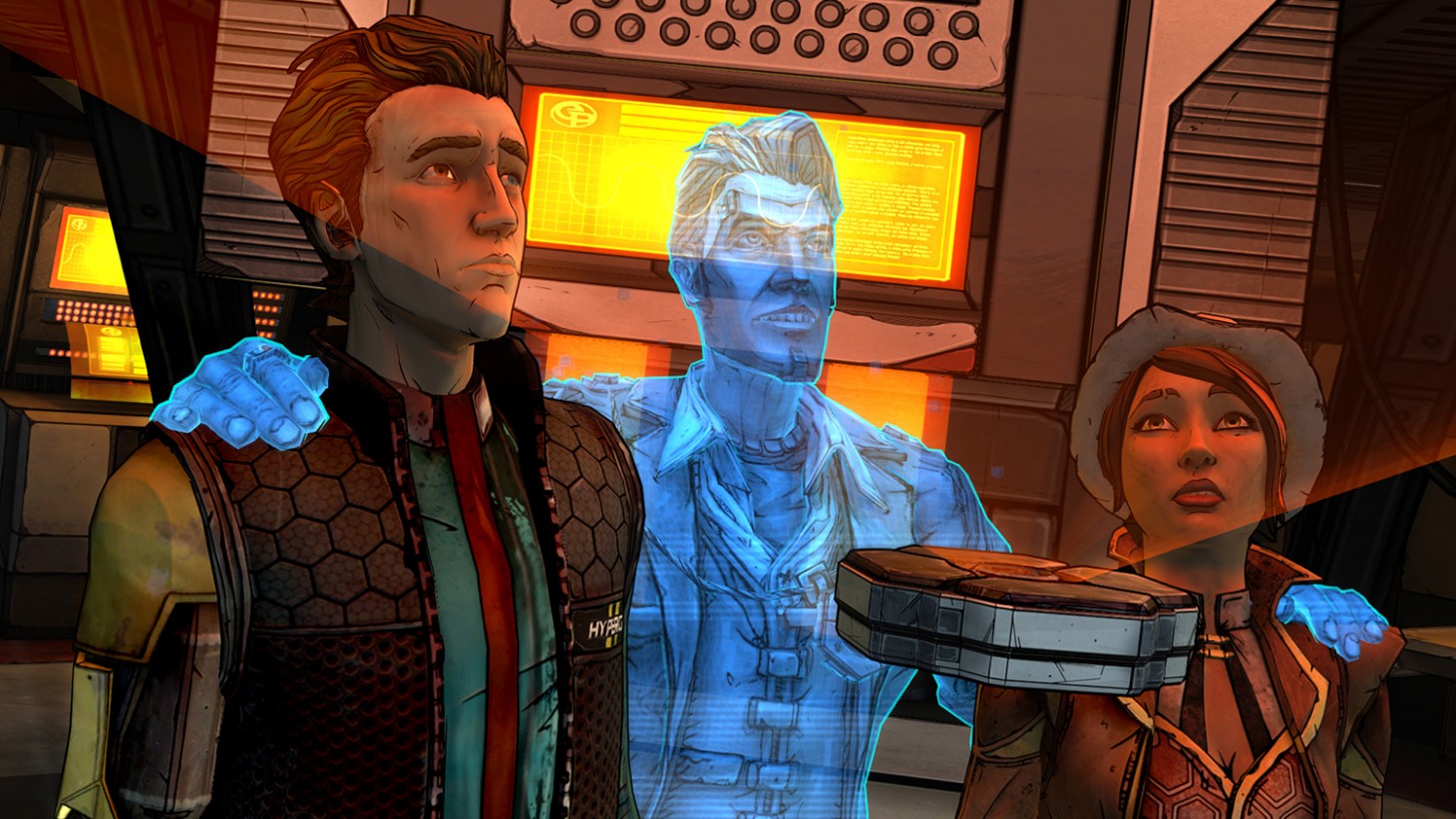 Tales From The Borderlands Is Telltale’s Best Game

I’ve hardly been quiet about my love for Tales From The Borderlands. One of the first things I did when I joined Game Informer was declare it my personal Game of the Year for 2015, to the skepticism and dismay of my fellow editors. Now that the game is available free to PS Plus members starting today, I thought I’d take some time to lay out why I think it’s the best game that Telltale has released (yes, even better than The Walking Dead) and why it’s worth your time. You Don’t Have To Play Borderlands To Understand It
Though Tales From The Borderlands takes place after Borderlands 2, explicitly references events from that game, and features characters from the series, you can play Tales without having ever touched a Borderlands game. Basically, all you need to know is that Pandora is a deadly place and that Handsome Jack is a selfish, maniacal butthead, and you’re good to go.

This is largely because Tales smartly focuses on its cast of brand-new characters, so it’s a self-contained sci-fi swashbuckling adventure that just happens to take place in the Borderlands universe. And it's a very entertaining one, too. The Story Is Brilliant And Heartfelt
Tales From The Borderlands is about a lot of things: friendship, greed, finding family and redemption, finger-gun fights. While the vast majority of M-rated games seem to revel in bleak environments or be stories of desperation or revenge, Tales is a rare comical game for adult audiences with a beating heart.

The story opens with a masked stranger dragging Rhys, a former company man for the corporation Hyperion and Fiona, a con artist, through the desert toward an unknown destination. What he wants is a mystery. How Fiona and Rhys relate to each other is also puzzling, though it’s clear Fiona has a lot of hatred for her fellow prisoner, kicking sand in his face and insulting him. The game uses a structure inspired by the Akira Kurosawa film Rashomon, jumping back and forth between Fiona and Rhys’ perspectives as they recount to the stranger how the two of them reached this point.

This works on a number of levels, allowing both Fiona and Rhys’ vastly different personalities to emerge as they each give their side of the story, bickering intermittently, while also shining a light on their different environments and who they are as people. These two, and the rest of the cast of characters, are far from perfect people. Rhys is cowardly, but witty and smart; Fiona is selfish, but can talk her way out of any situation. Seeing how these two people end up in the same place and where they go from there is a great thread that works to keep you playing from episode to episode.

Though this is largely Rhys and Fiona’s story, the larger cast of characters also boasts colorful personalities, most of them with their own arcs that are resolved by the game’s finale, like nerdy and swole Vaugn or loyal, hilarious Loaderbot – who has the best lines in the game. While the plot might have the appearance of a straightforward story, its unreliable narrator-hook and the pacing make it special. The Action Sequences Are Great
Okay, let’s face it: Telltale’s action sequences, essentially quick-time events, have never been stellar. Even the first season of The Walking Dead had a particularly weak gunfight sequence that’s pretty bad in comparison to everything else that game does wonderfully. Telltale’s formula for pressing a single button for complex character actions in these sorts of sequences just isn’t compelling. So how does Tales From The Borderlands get around it? By turning these segments into occasions for slapstick, like this fight that Rhys and Vaughn find themselves in early on in Episode 1 when surrounded by bandits:

The humor here works because Rhys and Vaughn basically bumble through it by sheer luck and the violent capabilities of Loaderbot. Rhys’ constant well, I can’t believe that worked but ok! reactions to each enemy encounter recalls the combination of violence and humor you might see in Pirates of the Caribbean and Firefly. Those Freaking Title Sequences
One of the constant stylistic devices Tales employs is an episode opening with a catchy music number. They’re great sequences that are filled with energy and humor, and all of them are memorable. The one from the second episode is one of the best and it’s early on in the series, so there aren't too many spoilers in watching it if you want to get taste of what I’m talking about here:

The ones from episode 4 and 5 are also pretty fantastic, though they’re all compelling in their own respective ways. These openings are also a way of making Telltale’s episodic structure more interesting, with each episode actually opening with a unique intro that feels like a heavily stylized television episode. Your Choices Matter
Telltale makes a lot of noise about how their narrative-driven games are about letting players make choices that matter. Whether or not these games live up to that mission statement consistently are up for debate, of course. However, I find that the choices in Tales From The Borderlands are a case of Telltale’s choice system working because it’s one of the more nuanced versions of it, focusing on character relationships over how a choice you make might dramatically shift an action somewhere down the road.

Just what kind of person is Rhys? Does he screw over a friend for the sake of making some cash? Does he feel hurt when he finds out the friend he didn’t betray, betrayed him? How does he react? Does he forgive him, and how does that choice affect Rhys and his friend’s relationship for the rest of the game?

These sort of interactions and the consequences of them are vastly more interesting than something like The Walking Dead, where you make a choice and a character dies either earlier or later in the season. In Tales, the choice-investment isn’t outward and immediate, but instead has your choices slowly developing and rounding out this cast of characters.

The Jokes Land And Emotional Moments Resonate
Tales From The Borderlands is a very funny game. The humor is an even split between the crude humor from the other Borderlands games and the character quirk-driven jokes of adventure games like The Secret of Monkey Island, with biting writing that both criticizes characters while making them endearing. I mean, Rhys is essentially just another version of Monkey Island’s Guybrush Threepwood, bumbling his way through dangerous events because of a single foolhardy mistake and somehow making it out to the other end thanks to wits, his fortune, and his friends.

While this may sound like an old hat, what makes this fusion fascinating is that Telltale knows how to balance it, going for the character-driven laughs most of the time but occasionally throwing in a lowbrow, dirty, or even meme joke to make sure all the bases are being covered.

However, Tales is also a game that knows when to be emotional and knows knows how to be both sweet and sad without being overbearing or needlessly bleak. To go to far into this would be diving headfirst into spoiler territory but there are a handful of sequences that are heartfelt, with characters coming to terms with their relationships or making firm decisions about their future. The Ending Is Perfect
For whatever reason, Telltale games have an issue sticking the landing. The only two that emerge in my mind that are perfect are the first season of The Walking Dead, where the notion of the video game tutorial is turned on its head in a heart wrenching way, and Tales From The Borderlands which chooses to end on an ambiguous note.

Let’s avoid spoilers here, since the purpose of this article is more vested in encouraging you to check out this wonderfully surprising experience for yourself instead of me telling you blow by blow how great the game is, but I will say that all the characters end up where they were always going to end up, your decisions come to bear, and everything is settled while also leaving the doorway open should Telltale or Gearbox ever bring back these characters for future installments or stories.

Tales from The Borderlands will take you 10-12 hours to play. It's a fantastic adventure with a great cast of characters that shows that Telltale can still make genuinely great stories. Regardless of whether or not you have PS Plus, you should download the game and take the time to play it, especially when you find yourself in need of a laugh or a great story.