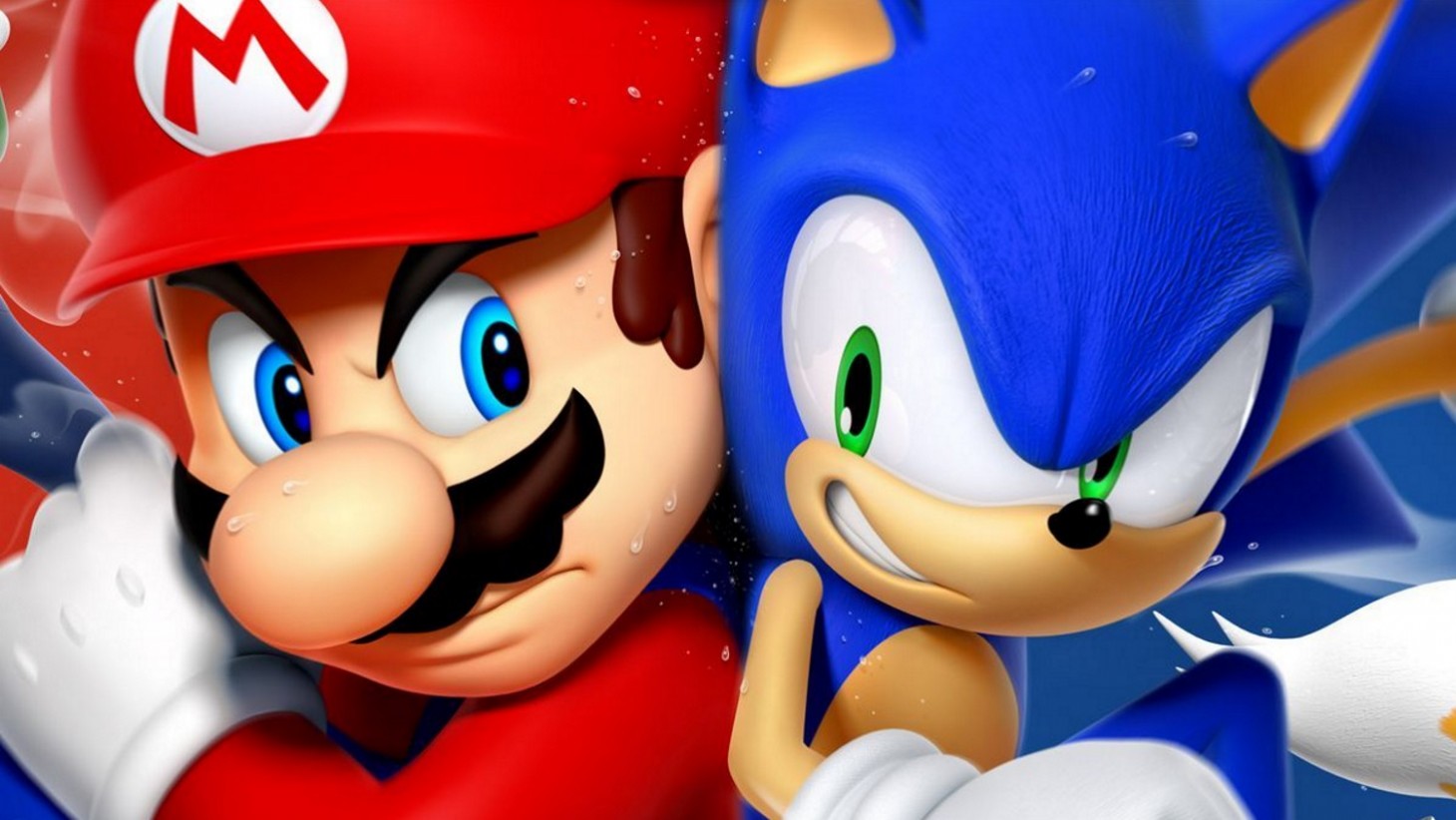 Jumping Platforms: How Sonic Made The Leap To Nintendo

In the early '90s, no bigger rivalry existed in the video game industry than the one involving Nintendo and Sega. Between cutthroat business tactics and aggressive marketing campaigns, the hostility between these two companies reached a fever pitch in the early-to-mid '90s as Sega fought to take on the previously undisputed king of consoles.

"They were absolutely ruthless," former Sega of America CEO Tom Kalinske says. "I've got to hand it to them. I respected how strongly they tried to control the business, but in my opinion, a lot of the stuff they were doing was illegal. It was really monopolistic practices."

Those practices, which according to Kalinske included Nintendo tying up the ROM memory chip market and pressuring third-party developers and retailers to not publish on or carry Sega hardware, only escalated the feud between the two gargantuan forces in the game industry. This competition carried over to the two companies' mascots, Mario and Sonic the Hedgehog. Mario, the godfather of the modern platforming genre, and Sonic, the challenger who expanded on that winning formula in a number of ways, were constantly compared.

As with any rivalry, the developers behind the Sonic franchise always seemed to measure themselves against the Mario franchise. "In that time Super Mario Bros. and the whole Mario franchise was the best game out there in a lot of people's eyes – especially when you get into action and platforming," says producer of the Sonic series and current head of Sonic Team Takashi Iizuka. "There were so many fans of the Mario series and then we came out with Sonic, who was this character that was cooler, had this visual style where he was bright blue, he played faster, the controls were better – it was a tighter game."

Sonic kept pace with Mario's biggest and best entries through the mid-'90s, but when the Saturn launched and the series' first attempt at a true 3D game, Sonic X-treme, it failed to make it to market. Mario quickly began to pull away with the revolutionary Super Mario 64. The competition began to fade, until Sonic reemerged alongside the Sega Dreamcast in 1999 with the critically-acclaimed Sonic Adventure – the highest-selling game on its system. 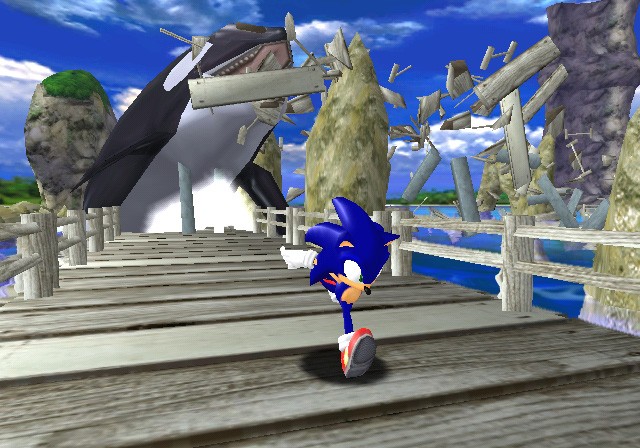 Unfortunately, the resurgence was short-lived as even a well-received second entry in the Sonic Adventure series couldn't salvage Sega's doomed system. The Dreamcast was discontinued in 2001 just before the launch of Sonic Adventure 2, forcing Sega to become a third-party publisher.

This transition affected development for the entire team of Sega developers who were used to creating for a single platform that could be adapted to their development needs and desires. The ability to request hardware changes, like the ones that lead to the inclusion of the lock-on technology in Sonic & Knuckles on Genesis or the Visual Memory Unit of the Dreamcast, was no longer possible.

Despite these changes, the team was optimistic about multiplatform development. "It's very sad that Sega's hardware business was canceled, but this allowed Sonic to run over a variety of different platforms," says series creator Yuji Naka. "This made it so more people were able to play and enjoy Sonic games than ever."

When news hit the development team that they were going multiplatform, Iizuka immediately petitioned Sega of America marketing to get Sonic on Nintendo hardware. One of the first games to make the leap during this new era was Sonic Adventure 2, which was ported to the Nintendo GameCube in 2002.

For a lot of Sonic fans, seeing the blue hedgehog on a Nintendo platform felt sacrilegious after the rivalry in the '90s. "From my perspective, yeah, the companies may have been at war from a promotional standpoint – there was a lot of rivalry being created," Iizuka says. "As hardware manufacturers, you're always out there competing against everyone else in the marketplace, but for me, I was just out there to make the greatest games possible, and bring them to as many people as possible."

Once the barrier was broken and Sonic was living on the same platforms as his once-bitter rival, both Sega and Nintendo began opening up to the idea of having those characters in the same game. Naka was the first one to mention it to Sega, but when he left the company in 2006 to form his own development studio, the dream still had not been realized. 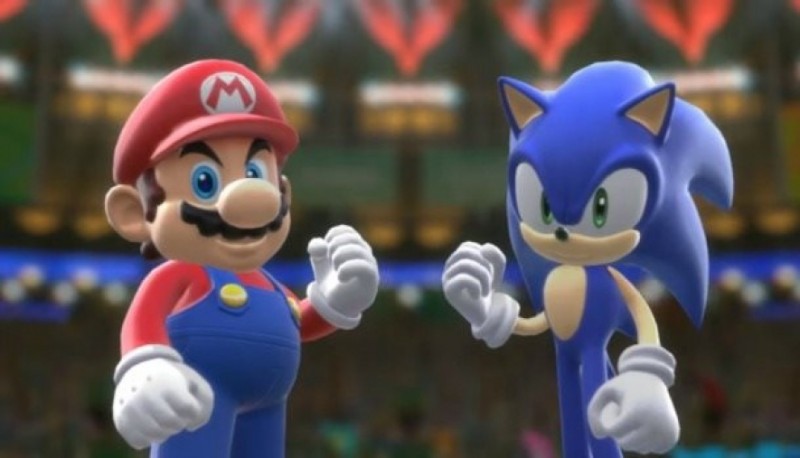 Following Naka's departure, the conversations continued between Sega and Nintendo as the companies tried to figure out the best way to bring these two distinct universes together. "I always thought it would be great to have Sonic and Mario in the same game, but if you put them in an action game, the feeling of speed is very different, so it wouldn't have worked," says Nintendo designer and producer Shigeru Miyamoto.

The two sides continued to brainstorm ideas, with the eventual solution being mash-up games with no bearing on the established universe of either franchise. "I started this conversation with Nintendo, and then later when Sega picked up the license for the Olympic Games video games, we had that foundation with Nintendo to say 'We want to bring Sonic and Mario together and have them appear in the same world and have them compete against each other, and we're going to use the premise of it being the Olympic Games and these characters are participating in the Olympic Games together to make that happen,'" Iizuka says. "It was the first great conversation about getting these characters together to compete and have fun together."

The first title was Mario & Sonic at the Olympic Games, which appeared in late 2007 on the Wii and early 2008 on DS. Shortly after that, Sonic appeared alongside Mario once more in Super Smash Bros. Brawl for the Wii, giving fans who lived through the '90s console wars the opportunity to finally pit those two characters against each other.

The collaboration has proven successful, as Mario & Sonic at the Olympic Games has continued to release new entries every two years to coincide with the real-world Olympic Games, including one in 2016. Sonic also made an encore appearance in the Super Smash Bros. series in 2014 in both the Wii U and 3DS versions, and is now considered a mainstay of that popular series. 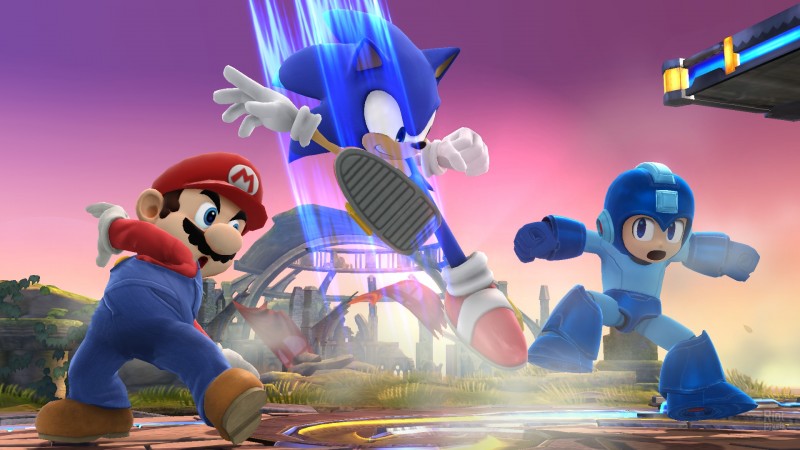 In addition to this collaboration, Sega also released several new games exclusive to Nintendo platforms. Over the course of 10 years, Sega published Sonic and the Secret Rings, Sonic and the Black Knight, Sonic Colors, Sonic Lost World, and Sonic Boom: Rise of Lyric across Wii and Wii U, as well as several handheld games for the DS and 3DS. For the past several years, the franchise has even been exclusive to Nintendo hardware.

Now, the exclusivity of the series is coming to an end, and Sega is looking forward to going multiplatform once again with titles like Sonic Mania and the untitled Project 2017 from Sonic Team. "That relationship greatly benefited both Nintendo and ourselves, but now we're coming up to the end of that exclusivity and we're excited about being on all platforms," says newly-appointed chief brand officer of Sonic the Hedgehog Ivo Gerscovich. "They've been great partners of ours and there's a great respect between both companies."

Even though Sonic and Mario now take part in friendly competitions on a regular basis, not everyone is thrilled about the collaborations. Kalinske, who was one of the primary people fighting in the trenches of the '90s console wars, says he was "really shocked" the first time he saw Sonic on a Nintendo console.

"I about fell over to tell you the truth," Kalinske says. "I still have trouble with this concept of this company that was our enemy that we fought tooth and nail against, and now they're buddies! They're very close and have a very close relationship."

Former director of marketing at Sega of America Al Nilsen says he falls in line with Kalinske's opinion on the subject. "It just goes back to our relationships with Nintendo from the early days," he says. "We have battle scars from those days. Personally, I just don't see a world where Sonic and Mario are best buddies."

Kalinske's first time seeing the two mascots together was at E3 2014 when Nintendo was showing off Super Smash Bros. for Wii U. He says he picked Sonic and was very happy he was able to beat the Nintendo representative giving him the demo. When I asked him if enjoyed the opportunity to control Sonic as he punched Mario in the face, Kalinske laughs and says, "Yeah. Right! It was a dream come true!"

It would appear that though rivalries inevitably fade and evolve, for some, the bad blood never goes away.