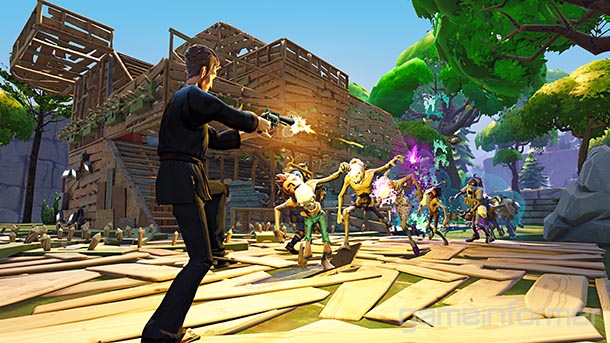 Fortnite's mixture of action and base-building is designed to appeal to many styles of gameplay, from accomplished shooter veterans to armchair architects. Earlier this week, we checked out Fortnite's gun-toting commando class. Today, we're taking a look at the game's other combat-focused class: the katana-wielding ninja.

While every character in Fortnite can build, explore, and hold their own on the battlefield, each class is suited to a particular style of play thanks to a variety of abilities and bonuses unlocked via its skill tree. Below is a look at some of the elements that make the ninja stand out, as well as our hands-on impressions of how the class plays. 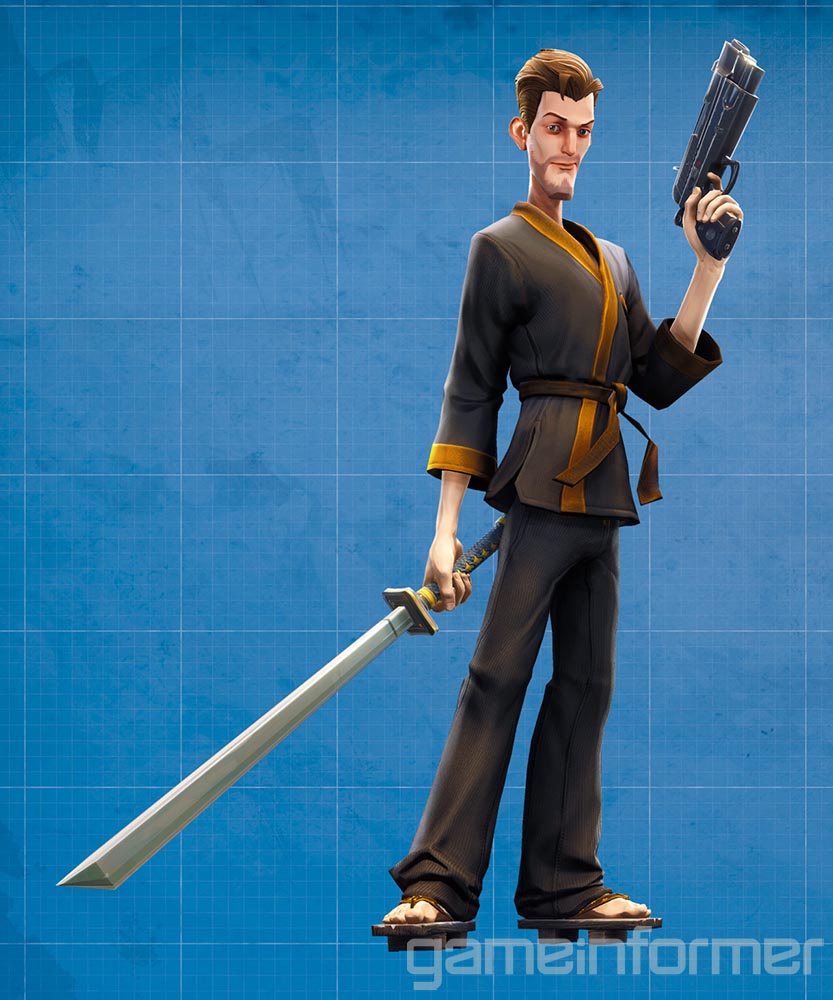 Who is it for:
Melee fighters. Players who prefer speed and technique over bullets and bombs.

Starting Ability:
Mantis Leap – Allows the ninja to perform a double jump capable of vaulting over single-story walls and cliffs.

First Unlock Ability:
Assassination – Deals additional damage with each consecutive strike of an edged weapon for a short time. Can stack up to seven times.

Other Abilities:
Throwing Stars – Allows the ninja to throw a trio of medium-range projectiles.
Smoke Bomb – Creates a smoke cloud that stun locks enemies for a short period of time.
Shadow Stance – Killing an enemy turns the player into a shadow and temporarily reduces the amount of damage taken from enemy attacks.
Dragon Slash – A powerful attack that instantly propels the ninja forward, dealing massive damage to enemies caught in their path.

Hands-On With The Ninja

The ninja is the second of Fortnite's combat-oriented classes that will be available at launch. The ninja features an affinity for melee weapons, and as such, many of its skill upgrades focus on close-range combat. However, the ninja's preferred weapon of choice isn't the only aspect that differentiates it from the commando class.

While not as beefy as commandos or constructors, ninjas are incredibly deadly in certainly situations thanks to their speed and abilities. Facing a tougher enemy like the wall-destroying Smasher head-on can be a life-threatening affair, but a well-timed smoke bomb or Dragon Slash attack can help mitigate the danger of having to get so close to your target. Abilities like Shadow Stance provide defensive buffs for killing enemies, allowing the ninja to stay in the thick of the action longer and combo together kills.

Despite these abilities, it's still important for ninjas to use the environment to their advantage. Setting up defensive traps near your fort can provide a safety net to fall back on should the odds tip out of your favor. In one zone, we designed a gauntlet of spike plates, electricity traps, and wall arrows outside the ground floor of our stronghold. When the invading monsters started ganging up my ninja, I led them to their deaths in the booby-trapped corridor like a demented Pied Piper.

However, the most important of the ninja's abilities is the Mantis Leap. Mantis Leap allows the ninja to perform a double jump, providing just enough air to leap over single-story walls and cliffs. This combined with the ninja's fast movement speed make the class a great choice for exploration as well as combat. Being able to vault up onto a roof without building a ramp that monsters could then also use helps the ninja leave pursuing foes in the dust.

I still kept some guns on hand during my play sessions with the ninja, but rarely felt the need to use them during enemy encounters. Slicing my way through an entire horde of sluggish husks never got old, and finishing off powerful enemies with a lightning-fast Dragon Slash proved the ninja doesn't need advanced weaponry to be a formidable foe. I still ultimately preferred my time playing as Fortnite's commando, but once I have more time to tinker with the ninja's skill tree options, I could see it becoming my favorite class.

Going Head-To-Head With The Ninja

During our early look at Fortnite's competitive multiplayer, Epic made it clear that the balance of the classes and their abilities is far from complete. Our time playing as the ninja confirmed this; the ninja's smoke bomb ability stun locked opponents for so long that it was basically a death sentence – the assaulting melee master could slice even the strongest foes to death before they regained control. While we're sure Epic will nerf the smoke bomb's effectiveness for launch, the ninja class is still a force to be reckoned with in head-to-head matches.

The ninja's speed makes it a great class for running out and collecting resources for their team's constructor at the beginning of matches; during our play sessions, this sometimes proved to be the difference between getting a well-defended fort quickly erected, and an early, shame-inducing defeat.

However, like in Fortnite's campaign mode, the Mantis Leap in an invaluable ability that sets the ninja apart from the other classes. The PvP map that we played featured an inconspicuous, one-story plateau near our statue and the fort we built around it. While the geological structure didn't mean much to the constructors or commandos in the game, it gave the invading enemy ninjas the perfect platform to double-jump up and above the high walls our team had erected and fortified to keep them out. To add insult to injury, it wasn't until a duo of fleet-footed ninjas hopped their way past our defenses that we realized we had forgotten to place doors in our outer wall – we had effectively built ourselves out of our own base, leaving the opposing invaders alone with our statue. Thankfully, players can easily modify walls at any point, but the embarrassing gaffe and the exploitable design of our base ultimately cost us the round.

Ninjas are no slouch when going up against human opponents, either. Dragon Slash is a great attack to use against aggressive commandos. With it, ninjas can wait behind a building or rocky outcropping for the commando to draw near, then use Dragon Slash to instantly close the gap and slice through them. This often propels you behind your target, making it easy to turn around and launch into another offensive attack before your enemy even knows out what hit them.

Fortnite's ninja class strikes a good middle ground between the commando and constructor. The ninja's speed and Mantis Leap facilitate the exploration elements of the game, while the character's deadly sword strikes and offensive abilities make the class a more than viable option in combat.

Check back later in the week for our in-depth look at the constructor class, along with more hands-on impressions. To see all of this month's bonus Fortnite features, click the hub banner below. Want to play Fortnite for yourself? Sign up at Epic's site for a chance to be included in the upcoming alpha.