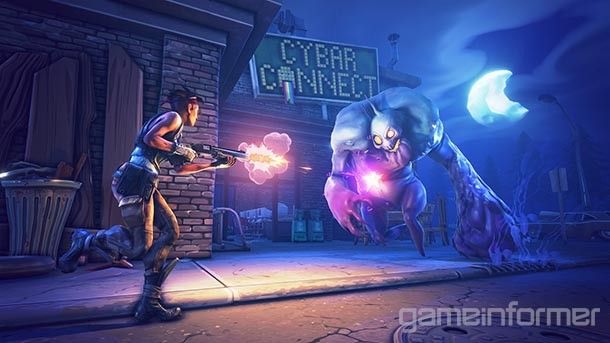 Fortnite constitutes a major departure for Epic Games, thanks to its strong focus on fort building and exploring large, procedurally generated worlds. However, the first of Fortnite's character classes will be reassuringly familiar to fans of the developer's venerable history in the triple-A shooter space. The commando is the tried-and-true lynchpin of any player squad, providing ample defense against the storm's encroaching monsters with an arsenal of high-powered firearms.

While every character in Fortnite can build, explore, and hold their own on the battlefield, each class is suited to a particular style of play thanks to a variety of abilities and bonuses unlocked via its skill tree. Below is a look at some of the elements that make the commando stand out, as well as our hands-on impressions of how the class plays.

Who is it for: Shooter fans. Players who know their way around a gun and prefer the thrill of combat to elaborate building.

Starting Ability:
Debilitating Shots – Hitting a target temporarily increases the amount of damage he or she takes. Can stack up to three times.

First Unlock Ability:
Make It Rain – Landing a headshot increases the commando's rate of fire for a short time.

Hands-On With The Commando

When I started playing as a commando, it didn't take long until my inventory had been transformed into my own virtual armory. I acquired and crafted a variety of pistols, machine guns, rifles, and shotguns, each with its own unique stats and color-coded by rarity.

While every class can use firearms, the commandos' unique abilities give them an advantage over other gun-wielding characters. The commando's first two upgrades – Debilitating Shot and Make It Rain – both reward accuracy by increasing damage and rate of fire for a short period of time, making it easy to quickly take down groups of slow-moving husks. Combat will be immediately familiar to Gears of War fans; aiming in Fortnite zooms in to an over-the-shoulder perspective, giving players the ability to line up precise headshots from a distance.

Unlike Gears of War, however, players aren't limited to toting around a pair of guns and their trusty pistol at one time. After looting some new weapons from treasure chests on a suburban-themed zone we played, I loaded up my quick bar with guns for every occasion. I kept an automatic shotgun handy for clearing out infested buildings, along with a bolt-action rifle for long-range sniping and a couple of submachine guns and assault rifles for when things got out of control. An early prototype rocket launcher even let me blow up entire walls – the perfect tool for a fast getaway. Like many loot-focused action games, old favorites were periodically replaced by new favorites, capable of dealing out more damage.

The commando's ranged-weapon skills come in handy when defending your makeshift fort from attacking monsters. Sure, you can run around in the thick of the action and blast enemies at close range, though your slower movement speed puts you at a disadvantage compared to the fleet-footed ninja. Instead, commandos excel at attacking from elevated positions. Most of the forts we built during our play time were sprawling, multi-level structures, making it easy for commandos to get the drop on invading enemies. Using the simple construction mechanics, players can add balconies and windows to their forts, providing cover for the team's sharpshooters.

Commandos also have some explosive weaponry at their disposal. Grenades and proximity mines are two of the predictable but nonetheless invaluable items commandos can deploy. We laid out proximity mines in front of doors and chokepoints near our fort, and used grenades to clear out swarms of husks as they attempted to break through our walls.

Thanks to Fortnite's crafting mechanics, we never had to worry about running out of ammo. In addition to looting ammunition from crates, cupboards, and other containers in the environment, you can create your own ammo from basic resources you collect by breaking down objects in the environment. Crafting grenades and mines requires rarer resources, so don't expect to have as abundant of a supply of explosives. Players also randomly receive new weapon schematics for completing a zone's objective; these blueprints allow the player to build the new weapon as many times as they wish, provided they've collected the necessary resources.

Going Head-To-Head With The Commando:

The commando plays an integral role in defending your team's base from enemy invaders. Placing the commando's proximity mines in front of doors (enemies cannot open your doors, but are free to run through them if you don't close them on your way out) and around the statue helped take down unobservant intruders before they could deal too much damage to our totem. Camping out on the roof of our base allowed commandos to spot and deal with foes from a distance.

On offense, the commandos come in handy for drawing enemies into firefights, allowing the swifter ninjas to sneak into the opposing base and unleash melee attacks on their statue (in the build we played, projectile weapons would not damage the statue, so players had to switch to their trusty pickaxe or sword). After a period of time, night sets in, spawning waves of monsters that complicate the tug-of-war battle between the two teams. One of my favorite moments from our PvP time with Fortnite was leading a string of monsters to the enemy's base under the cover of night, and then sneaking in through the base's front door when an opposing team member came out to deal with the NPC invasion. A few seconds later, I took down the opponent's constructor, giving me a few uninterrupted moments to bash on their statue before reinforcements arrived.

Fortnite's commando may not be the most unique class of the bunch, but it provides a stable foundation for the game's combat and fort defense elements. Because players are free to play and level-up multiple characters, you'll definitely want to have at least one decked-out commando in your roster.

For more on Fortnite and to see the game in action, check out our hands-on impressions video. Make sure to check back later in the week for our in-depth looks at the ninja and constructor classes, along with more hands-on impressions. To see all of this month's bonus Fortnite features, click the hub banner below. Want to play Fortnite for yourself? Sign up at Epic's site for a chance to be included in the upcoming alpha.