As we inch closer to the release of Marvel’s Guardians of the Galaxy, Eidos Montreal is slowly revealing more characters our misfit team of heroes will encounter on their adventures. Earlier this month, we got a look at Lady Hellbender and Drax’s, um… unique way of flirting. Today, we get an introduction to Grand Unifier Raker, a foil for the Guardians who doesn’t seem vulnerable to sweet-talk like Hellbender. Still, that doesn’t stop Starlord from attempting to stall by flapping his gums.

The new trailer starts with the whole Guardians team being caught off guard by a door opening behind them. From behind the cover of a blinding light emerges Raker and a pair of humongous cloaked minions. The Grand Unifier is a humanoid-like alien with arms that look like an unfortunate round of Tetris. Starlord had his blasters trained on the intruders but decides to greet them instead. Rocket, on the other hand, tries blasting Raker, who effortlessly deflects the shots. Knowing he can't shoot his way out, Peter Quill tries to butter him up while Groot is tapping a green button, trying to contact an unknown ally who doesn’t show. 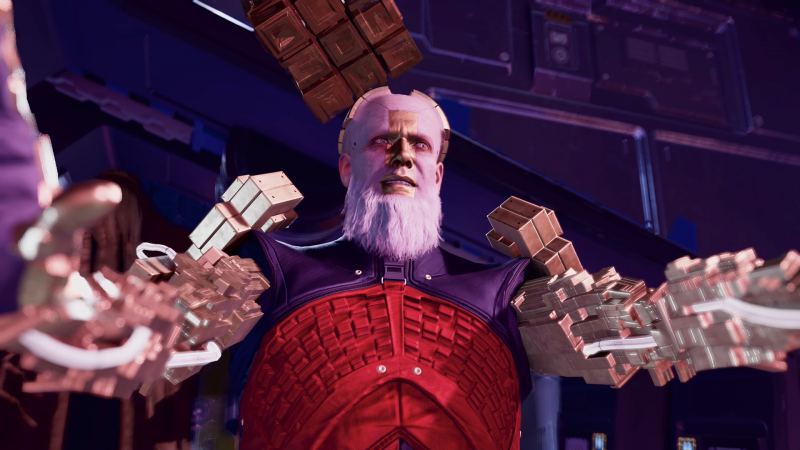 Raker says the Guardians came seeking "truth," and The Matriarch wishes to share it with them; an invitation that would sound pleasant in any other context but is much more sinister when being enveloped by an ominous space station. “The Matriarch awaits,” states Raker as the team of heroes succumbs to the fact their day is about to get worse.

What do the Grand Unifier and The Matriarch want with the Guardians? Who was Groot trying to get to save their bacon? How did they get in this mess in the first place? We’ll find out more when Marvel’s Guardians of the Galaxy hits PlayStation 5, Xbox Series X/S, PlayStation 4, Xbox One, Switch, and PC on October 26. In the meantime, check out issue 338 of Game Informer Magazine for our cover story on the game.