This year marks the 30th anniversary for the Sonic the Hedgehog franchise and as with any major anniversary milestone for a long-running franchise, fans want something to celebrate the glory days of the series. While 2017's Sonic Mania paid stellar tribute to the 2D days of Sega's spiny speedster, fans still love and play the games that gave Nintendo's popular plumber a run for his money back in the '90s. During today's Sonic Central presentation, Sega announced Sonic Origins to help players relive the early days of the Sonic the Hedgehog series.

As the name implies, Sonic Origins gathers the several of the series' earlier entries into one collection. While we don't have too many details at this time, Sega describes it as a "new compiled series." As you might imagine, Sonic Origins features the mainline Genesis games (Sonic the Hedgehog, Sonic the Hedgehog 2, and Sonic 3 & Knuckles) as well as Sonic CD, which originally appeared on Sega CD. According to Sega, Sonic Origins will deliver a nostalgic experience with non-stop Sonic action and "fresh content." Outside of that, Sega teases fans that more information will be coming soon.

The classic Genesis games are perhaps some of the most ported titles in the gaming, with appearances across all kinds of platforms ranging from PC to mobile to even Apple TV. All of the games mentioned in the Sonic Origins collection were released on Xbox Live Arcade and are still playable today through backwards compatibility on Xbox Series X, Xbox Series S, and Xbox One. While Sonic the Hedgehog and Sonic the Hedgehog 2 have continued receiving the re-release and port treatments over the years, Sonic the Hedgehog 3 and Sonic & Knuckles have been largely absent from the sweeping re-releases. Sega has never released an official statement on the reason for that, but many speculate the reason is due to the music rights since popstar Michael Jackson has long been linked to the soundtrack. It will be interesting to see if the inclusion of Sonic 3 & Knuckles in Sonic Origins means those rights have been ironed out, or if Sega has found a workaround solution.

Another thing to watch is how much care goes into updating these experiences. Will the games that have seen re-release after re-release, like Sonic 1 and Sonic 2, receive additional features and content as the tease indicates? When these two games were released on Switch under the Sega Ages banner, they added new features like the spin dash to Sonic 1, the ability to play as Knuckles (without the Sonic & Knuckles cartridge) to Sonic 2, and the Sonic Mania drop dash to both titles. Will the "fresh content" be along those lines, or is Sega teasing something bigger? Only time will tell as we get closer to the launch of the Sonic Origins release.

We do not currently have a release date or platform list for Sonic Origins. For more on the Sonic franchise, head here to learn about why Sonic 2 was so important for Sega's rise to prominence, or head here to learn how Sonic 3 split into two games. 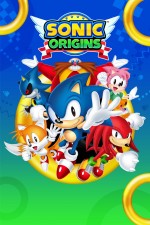