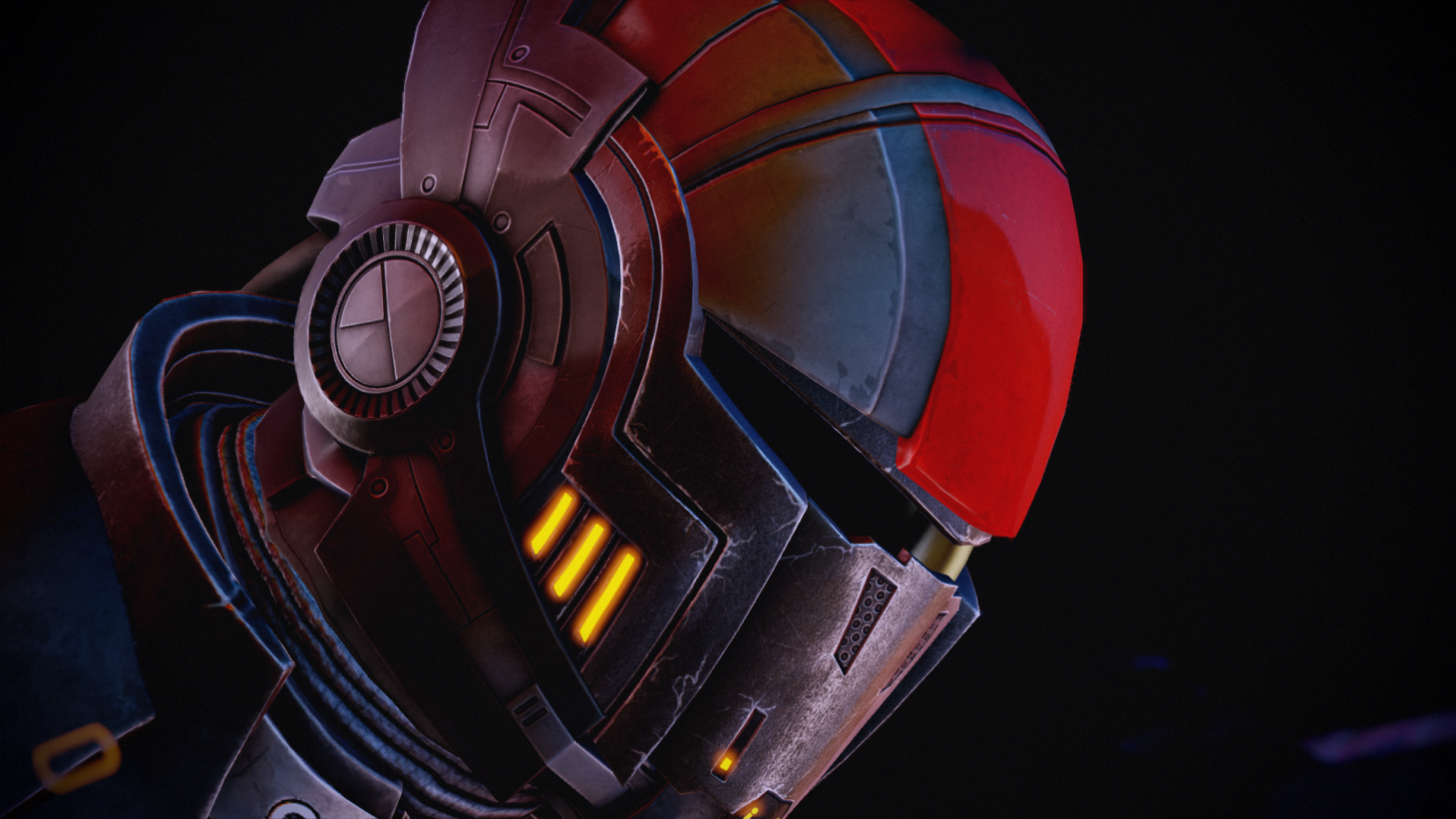 Sometimes it's good to be bad. While not all Renegade options in Mass Effect and the Legendary Edition are super hardcore, there are some triggers that you just can't help to pull. From punching the reporter to Spartan-style kicking a merc out of a skyscraper window, there are some Renegade choices that we love to choose. So, without further ado, here are our best Renegade moments in Mass Effect Legendary Edition.

First things first, what does Renegade mean? Going Renegade (indicated by red or bottom choices on the dialogue wheel) is for players that love to be ruthless. In Mass Effect 2, this option is my favorite. Punch anyone you want, throw bad guys out the window, threatening those that stand in your way. This type of Shepard does whatever needs to be done to get the mission accomplished; a real "the ends justify the means" type of character. In Mass Effect 3, however, those renegade options become something more ruthless than many players may have expected. Characters that paragon-Shepard becomes close to suddenly don't like the thought of being a part of their crew. It's a very different experience, especially if you commit to the renegade options 100%. If you dedicate yourself to this path, be prepared: some of the renegade choices in Mass Effect 3 are rough. But others? Others are so satisfying.

Warning: There are spoilers in this article to be able to talk about each scene. They are as stripped as possible, but spoilers are ahead. 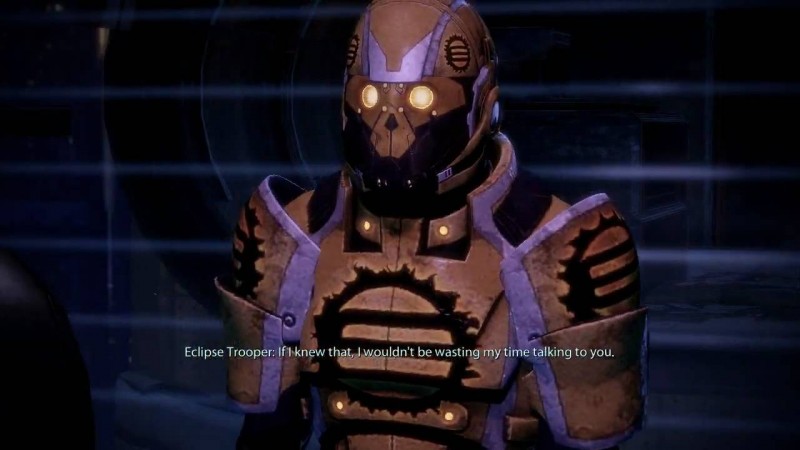 Spartan Kick Out The Window

If given the option to spartan kick a merc out of a very high-up window, would you do it?

Even though punching the reporter is a close second, Spartan kicking a merc in the chest right out of a skyscraper window takes the cake for me. Even if I'm devoted to a Paragon playthrough, I will still always slam down on that red trigger.

This scene takes place in Mass Effect 2 when going on the Assassin recruitment mission. When Commander Shepard starts interrogating a certain Eclipse Trooper, there is a brief flare of the Renegade trigger when Shep has had enough. Hit it and send that tool flying. Trust me, it feels good. 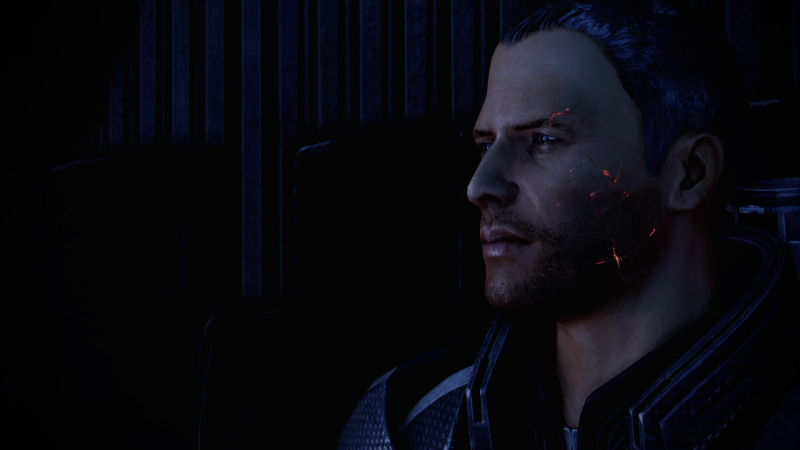 I would just like to take a moment to say that reporter Zhalisah al-Jilani is a huge A-hole and I will never advocate for giving her the benefit of the doubt. Did it feel a little weird to punch her as MaleShep when I rolled that way? Yeah, but whether I went John or Jane, this just felt weirdly good.

There isn't just one game where you'll have to engage with Khalisah al-Jilani, but you will get to a point where you can finally say enough is enough and sock it to her good. Is it petty for someone of Shepard's standing to punch a tabloid reporter? You betcha. Do I do it anyway? Yup!

For those concerned about losing out on any kind of professional relationship with her, don't be. You can make her apologize in the third game. 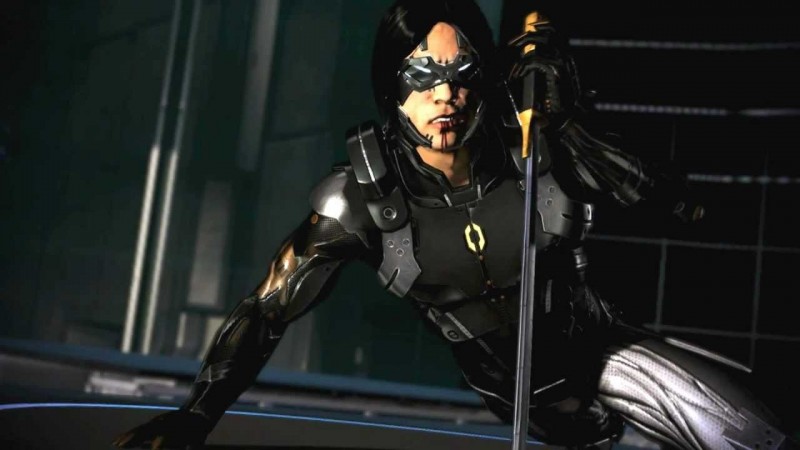 Kai Leng Gets Slammed With Karma

Dude's got a punchable face.

Depending on when you ask me what my number one Renegade option is, sometimes this is it. Without spoiling who the vengeance is for, Shepard has a very personal reason not to like The Illusive Man's right-hand guy: Kai Leng. Throughout Mass Effect 3, the Normandy crew just takes hit after hit with Kai Leng always being just one step ahead. Those tides change, however, and karma comes in swinging. During the mission where players take on Cerberus HQ, there will be a moment when Kai Leng tries to sneak up on a preoccupied Shepard. Luckily, that N7 training ensures that Shep is never fully preoccupied. If the Renegade option is chosen, you can interrupt his intended attack and stab him where it hurts with your omni-blade. Shepard also yells out a vengeful line that feels guttural and oh so good. 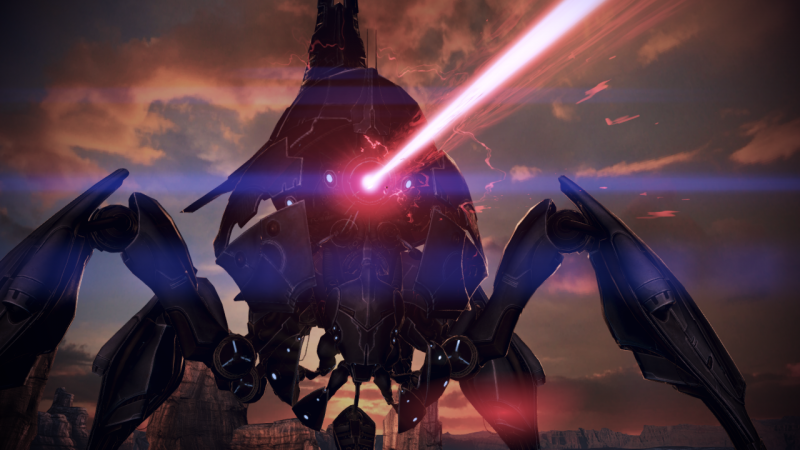 Another Middle Finger To The Reapers

You have the chance to literally blow up a Reaper. Take it.

The war against the Reapers is intense and many lives are lost throughout the fight. Some strangers, some friends, all tough to swallow. That being said, there is one moment on Rannoch where Shepard will toe-to-"Reaper equivalent of a toe" and at the end? There's an additional option to prove to them just how over their shenanigans you are.

When the Reaper on Rannoch is eventually taken down, there is the option to talk to it as it withers and dies. As the Reaper goes on and on with its air of superiority, Shepard can interrupt him with a Renegade prompt that, frankly, blows it to hell. It's freaking great, let me tell you. 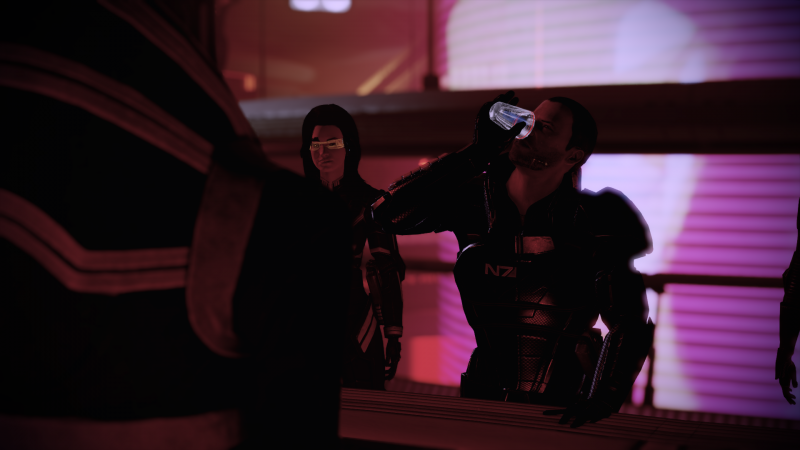 Wow, these do get pretty dark, don't they?

OK, so ... yeah. Obviously, some of these get pretty dark and pretty darn petty but hear me out. If there is one piece of advice I can give you, it's to get drunk every chance you get in the games, especially the third Mass Effect. Hilarity ensues after knocking a few back. That being said, getting your drink on in Mass Effect 2 will trigger a small side quest. See, there is a Batarian in the lower parts of the club on Omega called Afterlife. He hates humans. So, when humans break the number one rule in the club - "don't drink the drinks on Omega if you're human" - he basically poisons them. Problem is, Shepard's not easy prey. When they realize what's been done to them, essentially attempted murder, they can choose to go back and confront the bartender. There is a Paragon option to call him out in front of the whole bar, which effectively leads to a Turian killing him. Or, you can make him drink his own brew by going Renegade. Both options end with him dead. 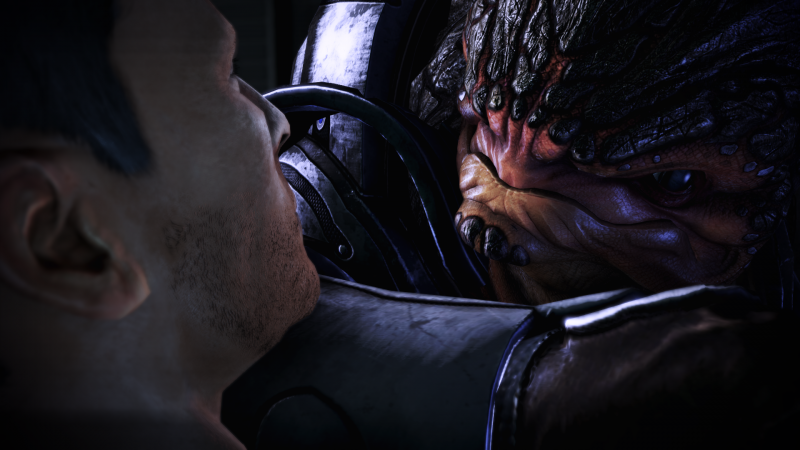 When In Doubt, Headbutt A Krogan

Think of it as just a really, really aggressive handshake.

Headbutts are basically handshakes for Krogan. It can be a greeting, it can be a warning, and it can be a test. Unlike handshakes, however, headbutts are fun. In Mass Effect 2, there is a specific quest for Grunt, a Krogan in the sequel. When heading to the Krogan homeworld, Tuchanka, Shepard must help Grunt prove that he's earned the Krogan name. When inquiring about a Rite that he must endure, there is a chance to defend everybody's favorite tank baby. And by defend, we clearly mean headbutt. 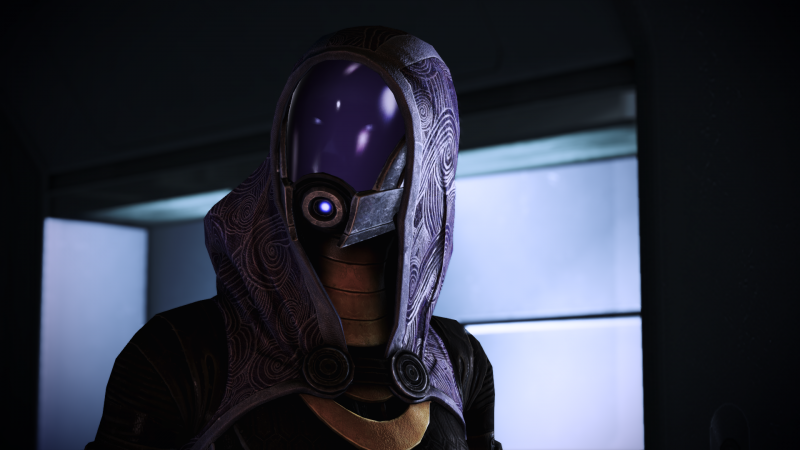 Telling Admiral Han'Gerrel To Shove Off

By Mass Effect 3, you're likely pretty close with Tali. Whether she's your romance option or your sister from another mister, you're probably like most of us and kind of protective of her. So when Quarian Admiral Han'Gerrel continues to be a pain in the butt, it's easy to want to show him what's what. Despite defending Tali's honor in Mass Effect 2, Mass Effect 3 makes him just a ponce. When he opens fire on Shepard and their squad aboard a dreadnought, the Commander can make the admiral regret his inability to listen to orders by punching him in the stomach and then ruthlessly kicking him off the Normandy for good. 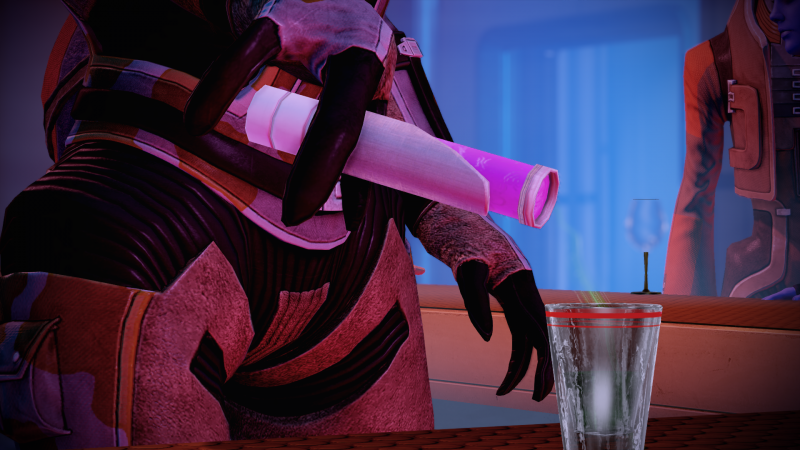 If Ashley is still with you by Mass Effect 3, you can act like you're in college again.

To say Ashley Williams isn't the most popular character in the Mass Effect universe would be a massive understatement, but if you enjoy this character and keep her until Mass Effect 3 you can opt into a pretty fun drink-off. There are several moments throughout the third game where Shepard can kick back and relax with the crew. With Vega, it's a pushup contest. With Ashley? Prepare to drink.

As part of the Citadel DLC, you can take her to the Silver Coast Casino and commence the drinking. Shep needs to make it through four shots in order to win. Failure to do so means Ashley is going to have some major smack to talk and you'll walk away with wounded pride.

This isn't the first time you'll see the party side of Ash. In the same game, she'll get so drunk with Vega that you'll find her hungover and praying for death. 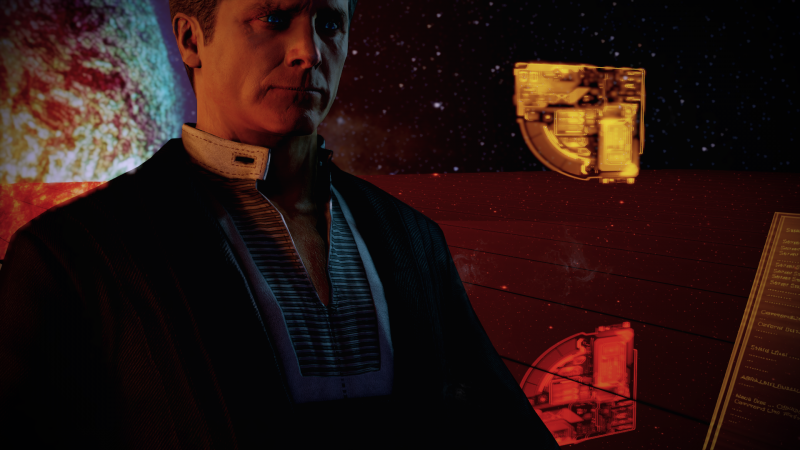 The Illusive Man was a tentative ally in Mass Effect 2, but in Mass Effect 3 he's your worst enemy. After countless battles, pointless hologram messages, and infiltration at every level, Shepard finally gets their time to square off against their former boss. When the Illusive Man has his final face-off against Shepard at the end of the game, his indoctrination becomes undeniable. He does the stereotypical bad guy thing and rambles to hear his own voice. During this scene, there is a Renegade prompt that will pop up, allowing Shepard to shoot him dead mid-speech.

It's very much worth it. 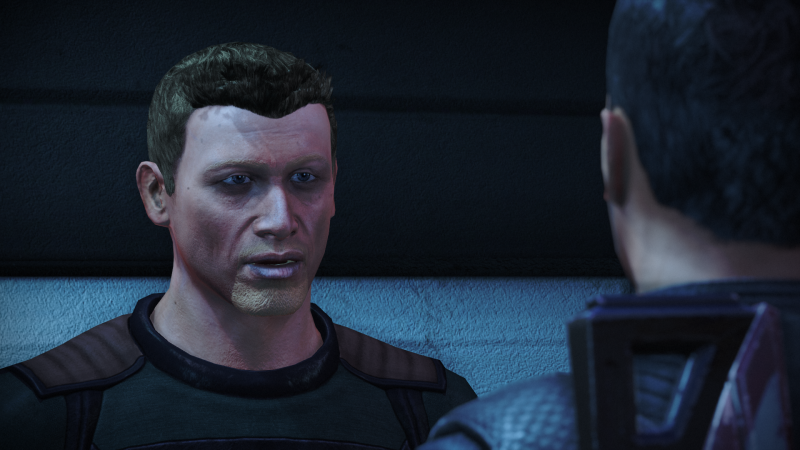 He's harmless, but that doesn't mean you have to be.

Conrad Verner. Oh, what a weirdo. Harmless fan turned resident obsessor, this kid worships the ground Shepard walks on. The situation escalates in Mass Effect 2 and eventually, Shepard will come up on him aggressively interacting with a worker at Illium's Eternity Lounge. His obsession with Shepard is evident and he is living on an entirely different plane of existence. Conrad has left reality, ladies and gents, but you can knock him back into it if you really want to.

If you choose the Renegade prompt during this interaction, you can shoot him in the foot and put him in his place. Or you can not, and be the good guy. Your choice.

There are tons of other moments out there where Shepard can choose Renegade or Paragon. There are a few choices that I will never pick more than once.  I picked the Renegade option to shoot Mordin in Mass Effect 3 during my 100% playthrough and immediately hated it. So much so, I turned right around and replayed a full Paragon run to make myself feel better. If you're interested in learning more about Paragon or Renegade, I highly check out our previous coverage here. It goes very deep into the two options and why it's dangerous to hover too much in the middle.