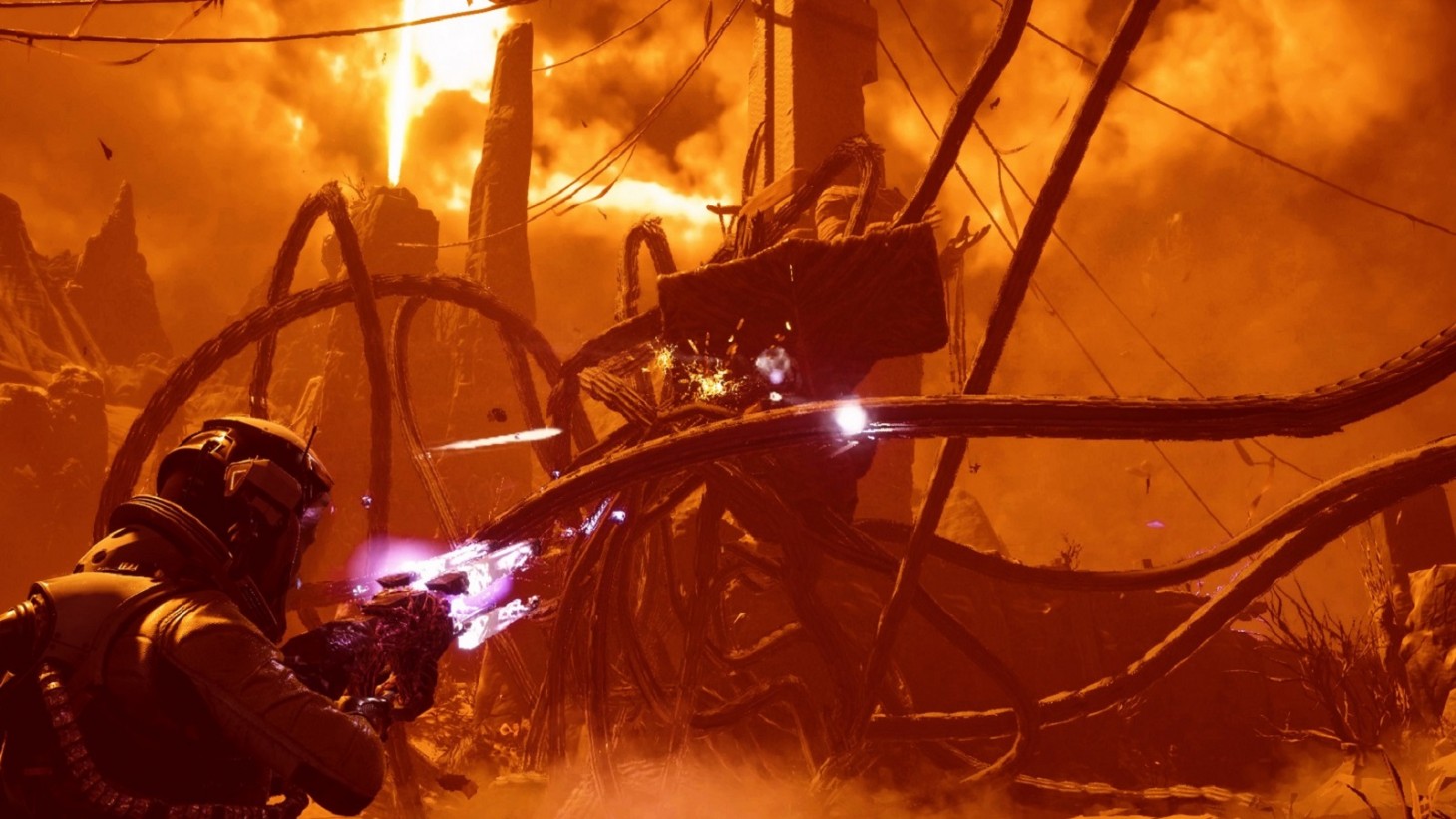 Why Returnal Is Already My Game Of The Year

Here at Game Informer, we get a chance to play games. A lot of games. Surprisingly, I find myself here in 2021 talking about another game-of-the-year quality title in the roguelike genre. In fact, roguelikes have taken my GOTY slot fairly regularly over the last few years, from Slay the Spire to Hades. While roguelikes have always featured compelling gameplay, now we’re getting story, worldbuilding, and other narrative designs on top of systems and mechanics that the framework is known for. If roguelikes were ever waiting for their moment to go fully mainstream, Hades was certainly that flashpoint.

Now, Returnal is a significantly different experience from Hades, but it does contain one of the most important elements that contributes to it being an incredible experience, and that is cohesion. The artistic components of Returnal feel like they’re drawn from the same united well, leading to a game that can somehow be lightning-fast arcade bullet-hell action and atmospheric, uneasy horror at the same time. These disparate factors come together to create a unified experience that feels like it was all cut from the same cloth. Art, music, gameplay, etc are parts of every game, but rarely do they sing together so well.

First, check out the Returnal review, because we’re going to delve into some minor spoilers here as we discuss a few aspects of the game. We won’t be going into story spoilers, but we will be discussing some of how Returnal ties various items together with a few examples, so be aware of that before reading on. There’s one battle in Returnal that I think captures the essence of what I’m talking about with unified elements more than any other, and that’s the Hyperion fight at the end of Biome 4. Without getting into too many details, the mystery arc of biome 4 tasks the player with determining the source of mysterious music, a haunting underpinning tone that grinds at the back of your mind as you hunt down several “boss door” keys throughout the zone, a gameplay mechanic that’s fairly standard in Returnal.

Once you unlock the door, the player is tasked with climbing to the top of the tower as the music intensifies and gets louder. While an ascending tune isn’t the most advanced mechanic ever seen in modern gaming, you have to understand how this worms its way into your mind throughout the course of the entire zone and has also been mildly inserted into your subconscious via storytelling glimmers before this point. Not only does the game zone of Biome 4 build to the Hyperion fight, it represents a culmination and a payoff. We get the song. We get the weird, song-themed boss battle where an organic terror hammers on a biological organ with deadly, beautiful riffs that blast you with beams from hell. Synchronization of elements. While most of Returnal’s boss battles are multi-phase encounters with rising stakes and shifting sounds, Hyperion’s is the best example because of its direct relationship.

As with most fights, the battle gets more intense as time goes on, including more and more hypnotic projectile formations to dodge, impressive terraforming, and watching Hyperion rush back to the organ to belt out some deadly notes. The fight is firing on all cylinders when you’re in it, blasting your mind with haunting hymns, working your muscle memory to dodge a zillion things, and keeping you rapt at attention as you anticipate the next upcoming mechanic or ability. While the actual “story” in Returnal isn’t going to win any Shakespearean awards, the breadcrumb thread that the game keeps you nibbling on is a perfect fit for the sci-fi horror vibe that’s laden with gnawing uncertainty and deliberate, ascending unease. The little lore bits and bizarre worldbuilding do a better job at nudging the tale along than a heavy-handed exposition. Atmospherically, it sells the shifting and ever-changing alien world immaculately, pulls you in, and never lets go.

Horror as a genre often fails to stick a satisfactory ending. Returnal’s final biome, the Abyss, is a terror theme park that ties up the most threatening mechanics with scary, deadly new enemies that embody the deep dark that the Abyss represents. Horrible tentacles in the dark as you go down deeper into the reaches of the unknown. The game builds up to this horrible zone and does not disappoint, as the reaches are filled with hidden terrors and a satisfying final fight. Returnal’s “less is more” story that is told in small, esoteric slices works far better than an explicit, streamlined narrative as you are constantly attempting to fill in the gaps yourself whether you know it or not, and it all goes into the fear stew that’s being served here. It’s not a jump-scare kind of horror, but when it’s working you feel real anxiety and trepidation when you go further into the depths.

In Returnal, it’s about the gameplay but also so much more. Returnal, as the sum of its amazing parts, qualifies as an experience. One you shouldn’t miss.