Fortnite's newest season, Zero Point, is uniting some of the greatest hunters in movies, games, and comic books for an epic battle royale showdown. This event kicked off with The Mandalorian and his child companion leaping through a dimensional rift, and almost every week after has brought new hunters like the Terminator, Predator, and this week's addition of Ripley from the Alien films. Unfortunately for her (but fortunately for us) she didn't emerge from the rift alone. A Xenomorph also made it through.

Both Ripley and the Xenomorph are now available for purchase. You can get both of them together for 2,200 V-Bucks, or you can get Ripley on her own for 1,500, and the Xenomorph for 1,600. Ripley has two looks you can switch between, and the Xenomorph has a built in emote. The Alien fun is rounded out with the P-500 Power Loader Arm Pickaxe, Jonesy the Cat in a carrier, a Cheyenne Dropship Glider, and a chest-burster emote. 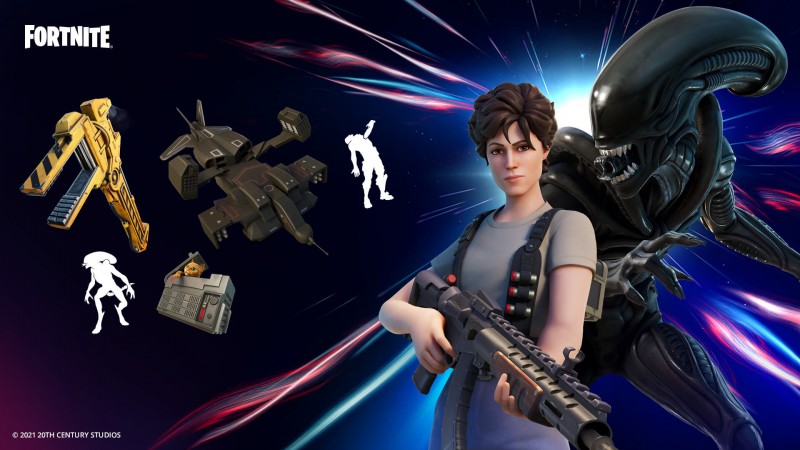 The Zero Point season still has a few weeks left, and if Epic Games keeps up its current pace of revealing new characters from other popular licenses, we'll likely see more exciting crossovers. We don't expect many more superheroes, as Fortnite is already flush with Marvel and DC characters from last season's Nexus War, which even saw Galactus lording over the map for a limited time event.

I recently wrote that this season of Fortnite has gotten me more into the game than I've ever been, and is a great jumping on point for newcomers or people who stopped playing. The infusion of new characters, missions associated with them, and flow of the battles have been fantastic.

Who do you hope appears next? Is there a popular movie or TV show with a hunter that would fit nicely into Fortnite's framework? Let us know your idea in the comments section below!