Ratchet & Clank: Rift Apart is launching on PlayStation 5 on June 11. Sony dropped the news in unexpected fashion in a promotional video for the game.

Outside of a release date (which is really the best part) the trailer serves as a montage of footage that fans have already seen. That’s a bit disappointing since we still don’t know a ton about Rift Apart’s story. We do know that  Dr. Nefarious uses interdimensional technology to search for a reality where he always wins. As our heroes try to stop them, they become separated between dimensions and must find their way back to each other. Along the way they’ll encounter the mysterious female lombax that turned heads during the game’s reveal, who we know will be playable.

Rift Apart’s gameplay centers on jumping through dimensions, utilizing the PS5’s SSD to instantly load into new areas. It’s a great showcase of the console’s tech, and Rift Apart features a performance mode to allow players to leverage the game’s impressive-looking horsepower. The game features new planets, enemies, as well as a new arsenal of over-the-top weapons. 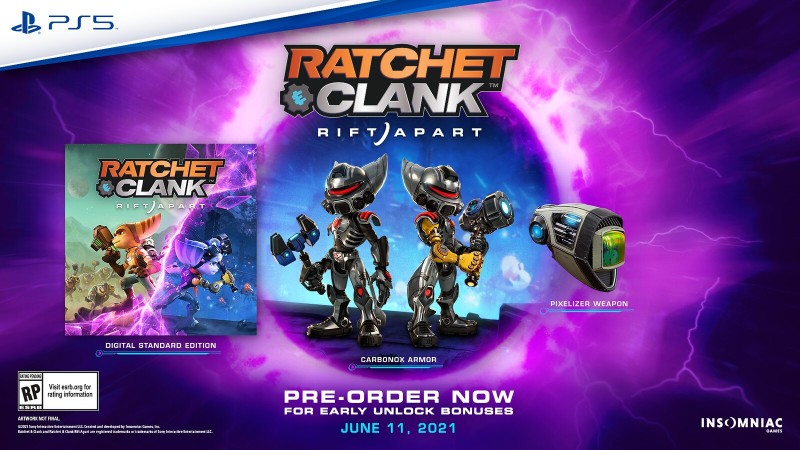 Sony is taking pre-orders for Rift Apart’s two versions: the Digital Standard Edition and Digital Deluxe Edition. Pre-ordering standard (pictured above) gets you an updated version of the Carbonox armor from Ratchet & Clank: Going Commando as well as the Pixelizer gun from 2016’s Ratchet & Clank. For fans of physical media, special launch editions will be available at participating retailers that include vouchers for the same bonuses.

The Digital Deluxe Edition runs for $79.99 and includes the game, five armor sets, a photo mode sticker pack, 20 Raritanium, and a digital soundtrack/art book. You can visit the Playstation Blog for more info on Rift Apart’s pre-order goodies.

As you wait for June to creep ever closer, you can watch an extended look at the game by checking out its Gamescom 2020 demo. Excited to finally jump into Ratchet & Clank: Rift Apart? Let us know in the comments!