It looks like IO Interactive, the studio behind the iconic Hitman franchise, has something new to reveal and we're getting our first look tomorrow on November 19. With a reveal set bright and early at 6 AM PT, fans of IO will see their first glimpse at whatever new project this team has been hard at work on.

The studio confirmed the reveal on its official Twitter account, sharing that the big unveiling will happen at 6 AM PT on Thursday morning. No other teases (at least that we can see) are in the smaller teaser can be found, leaving what's next completely up in the air for fans to guess until tomorrow.

Some are theorizing that this will be a Hitman collection for the newest generation of gaming with the Xbox Series X and PlayStation 5, while others are holding out hope for a new game in the franchise entirely. But it's possible that this has nothing to do with our favorite agent, and a new game entirely. In fact, the verbiage of "project" technically means that it might not be a game at all.

That being said, it's more likely that this will be the unveiling of the new IP that the team is working on, something that was confirmed back in 2019 during a documentary series.

Thanks to the series NoClip, we first learned about a brand new game in the works last year. “Earlier this year IO Interactive opened up a new studio across the bridge in Malmo, Sweden,” revealed the documentary. “And while much of the team is working on new Hitman content, and looking ahead to the third game, one that IO says may once again go episodic, the majority of the studio in Copenhagen is working on something secret, and rather excitingly, something new.”

It will be interesting to see what's next for IO. The Hitman franchise, and the studio behind it, has gone through some massively hard times. It will be nice to see where this team goes from here and how it will spread those creative wings. 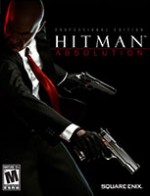