Destiny 2: Beyond Light Season Pass And Season Of The Hunt Guide

Destiny 2: Beyond Light is finally here and while launch was a little rocky with server issues, the latest content is an exciting expansion for the Bungie sequel. With a new expansion and a new season to dive into, here is what you need to know about the Beyond Light Season Pass and Season of the Hunt.

How much does the Beyond Light Season Pass cost?

If you're looking to scoop up the perks of the latest Season Pass, you're going to need to be ready to fork over 1,000 silver, which equates to $10. That being said, make sure you didn't just buy the base version of the expansion. There is a Season Edition available that includes with latest Season Pass, including the Digital Deluxe and Collector's editions. For those that have the latter, there are four Season Passes total to enjoy with that purchase.

Season of the Hunt start and end date

Season of the Hunt begins now with the launch of Beyond Light. The end date is set for 91 days post-launch, setting the final day for this season on February 9, 2021. You can learn more about Season of the Hunt with our previous coverage here.

Does this Season Pass have cross-save support?

Yes, if you purchase the Season Pass it will work across all platforms where you own Destiny 2. I am playing primarily on PC, but a lot of friends play on Xbox. If I want to hop on a console to enjoy some new in-game content with them, my Season Pass upgrade will transfer over as well.

As always, there are unique rewards tied to the Season Pass. Unlike previous seasons, however, there isn't a rollover at the end of each season, instead the content attached rolls over into the next season for the duration of Year Four.

Guardians can earn special items from the engram unlocks as well, encompassing gear from every season prior to Season of the Hunt.

Players can expect to unlock a few Exotic items exclusive to the current season, as expected, like the Duality Shotgun alongside a special ornament for this weapon. There are also Exotic quests, themed ornaments, and new armor to loot as well. 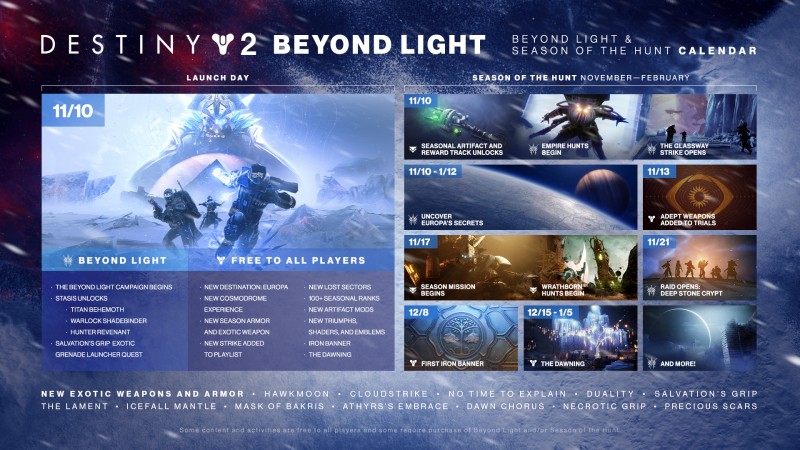 New finishers, a new Exotic emote, and more can all be unlocked:

Upon logging in for the first time, Season Pass owners will automatically tier up five ranks, simply for being there. From there, simply play the game to continue ranking up to 100, including running the usual events:

Destiny 2: Beyond Light and Season of the Hunt is available now. Be aware that it is launch day, so expect higher queue times than normal.