Scorn left many gamers scratching their heads when its mysterious (and, frankly, gross) trailer dropped during Microsoft’s Xbox Series X showcase back in May. Developer Ebb Software gave intrigued gamers a good look at the game’s H.R. Giger-style world and the horrors it contains.

The lengthy demo (an expanded version of a level shown in 2017 now running on Xbox Series X) takes players on a methodical trek through one of Scorn’s labyrinthine levels. One of the main visual takeaways is that everything has a bio-mechanical feel. Pulsating roots of flesh cover the metallic walls and gadgets feel as alive as the player. Even your weapon is just a shell covering a network of living muscle. At one point, the character impales a creature by firing a retractable rod from their gun’s barrel–reminiscent of the Xenomorph’s second mouth in Alien. Gross as the weapons are, you’ll need them to battle all manner of disturbing creatures, best described as “fleshy, toothy, whatchamacallits”.

Ebb unveiled Scorn back in 2016 and describes it as an “atmospheric first-person horror adventure game”. The game features non-linear exploration across its interconnected halls. As shown in the trailer, areas feature their own unique puzzles as well. As players explore they’ll unlock new skills and weapons that are sure to be just as...unpleasant looking as the arsenal showcased in the video. Sure, the new trailer may not have been the most action-packed look at the game. However, it does a good job emphasizing the unsettling atmosphere and creepy imagery.

We’ll have to wait a while longer to see what other horrors Scorn has in store for players. Ebb plans to launch the game for Xbox Series X and PC sometime in 2021. In the meantime, check out what’s coming to Xbox Series X on launch day and impressions of the console in action.

How does Scorn look to be shaping up? Share your thoughts in the comments below! 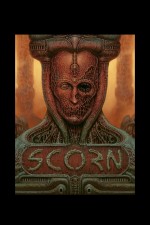