Fans have had many questions about Final Fantasy VII Remake during its years of development, and when the game releases later this week, they will finally have all the answers. In the meantime, two of the biggest things people are wondering about involve what happens after the credits roll: Does Final Fantasy VII Remake have a new game plus, and does it have any post-game content to pursue? The game addresses both of those concerns with a single clever stroke – but in short, the answer on both fronts is “yes."

Warning: Even though it doesn't spoil any plot points, this article does discuss the flow of the game after completing the main story.

You won’t see a new game plus option on the title screen, but the concept remains intact. After you finish the game, you unlock a feature that lets you jump to the beginning of any chapter while keeping all of your end-game progress (including levels, inventory, materia, and money). So, if you want new game plus, just select Chapter 1 (that's how I got the image above, with Cloud using a mid-game weapon in the first area). You’ll start at the beginning with your powerful characters and gear, and since the chapters continue flowing seamlessly into each other, you won’t have to manually select the next one to keep playing. 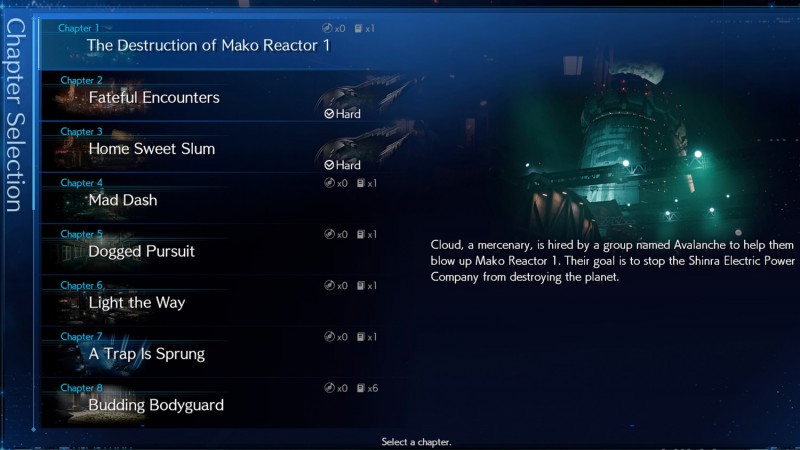 You can also just jump around back and forth between all of the chapters, which is useful if you’re hunting trophies. Some of those tasks – like completing all of the pull-up challenges, or getting the top score in darts – are only available during a small slice of the story. This approach is a little clunky, since it might involve replaying a decent chunk of a chapter that you don’t need just to reach the part you want. But once you complete your target minigame or grab your collectibles, you can jump back out.

However, the post-game pursuits don’t end there. Sure, it’s fun to play the game again with stronger characters and steamroll everything. But unlocking chapter select also opens up other options that are even more rewarding. 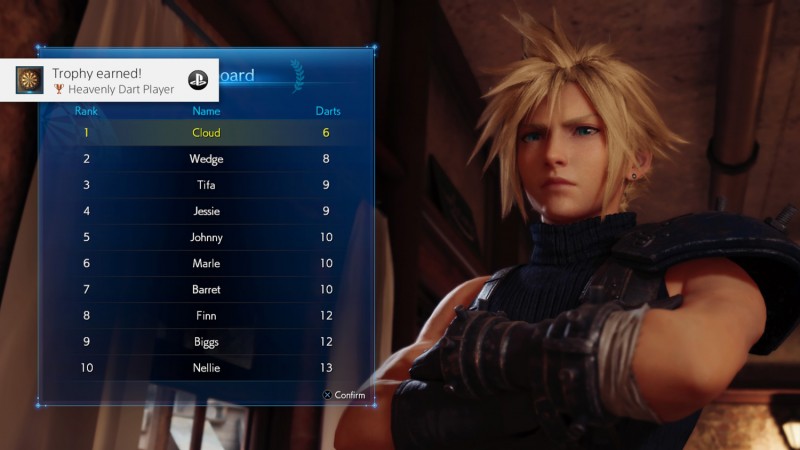 After you finish the main story, you gain a permanent boost to your experience and AP (which is what strengthens your materia). That makes it easier to hit level cap and get the useful higher-tier abilities on your materia. Why would you need that, though? Because with chapter select also comes a new, harder difficulty. You can choose hard mode only when starting a chapter; you can’t swap to/from it on the fly, like you can with the classic, easy, and normal settings.

Hard mode provides a fun challenge that adds new layers of strategy to fights you thought you'd mastered, partially because the enemies are more powerful and have different attack patterns, but also because you aren’t allowed to use items. You can't use them in battle, you can’t use them to recover between battles, and you can only restore HP (not MP) at rest points. This turns your magic into an extremely valuable resource that you need to manage carefully, and prevents you from just blasting your most powerful spells at everything constantly. 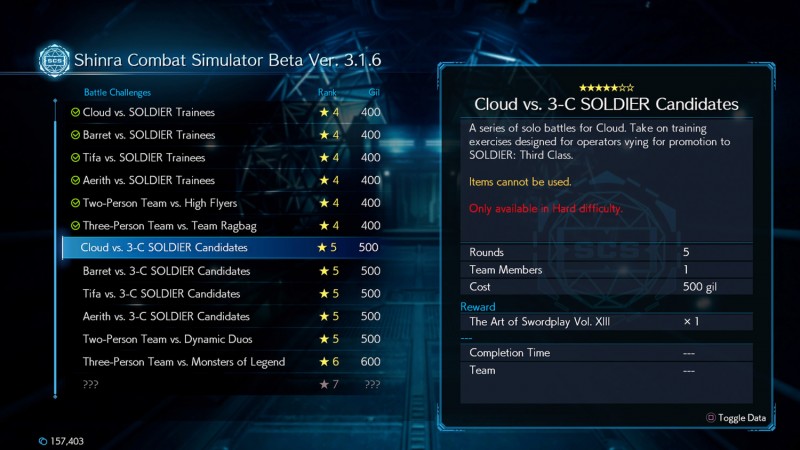 Lastly, a combat simulator in one of the later chapters has special battles that are only available in hard mode. These fights put your skills to the test; I tried tackling them as soon as they were available, and was quickly defeated. I’d recommend spending some time getting familiar with the game’s expectations in hard mode before taking these on.

For more on Final Fantasy VII Remake, read the review and watch us play it on New Gameplay Today.