You can call upon a Marvel superhero for almost any type of game on mobile, be it matching colored blocks or battling villains through turn-based combat. At this year's PAX East convention, Marvel held a mystery panel that revealed Marvel: Future Revolution, the company's first open-world role-playing game for mobile. The game is in development at Netmarble, the studio behind the successful mobile action/RPG Marvel: Future Fight.

At PAX, Marvel showed off a number of videos that give a brief look into the world, combat, heroes, and villains. As you can see directly below, combat is handled from a close-over-the-shoulder viewpoint. The action appears to deliver a mix of hand-to-hand combat with special abilities, but we don't know how players initiate these moves yet, or even handle movement within the sprawling worlds.

Future Revolution's story kicks off with numerous Earths coming together to form a new "Primary Earth." You'll suit up as an agent for the newly formed "Omega Flight" team to take on villains that pose a threat to the Primary Earth. This epic tales of numerous worlds colliding is penned by Marvel Comics scribe Marc Sumerak.

The trailers below give you an idea of what to expect from the art style, as well as a look at four heroes and a few villains. So far, Netmarble and Marvel have announced Captain Marvel, Captain America, Spider-Man, and Doctor Strange as heroes, and Red Skull, Baron Mordo, M.O.D.O.K., Yellowjacket, Green Goblin, and Red Goblin as villains.

The final trailer gives you a look at some of the worlds and details you'll find along the way. The game looks wildly ambitious, which shouldn't be surprising, given many of the Marvel titles on mobile are overflowing with characters, deliver outstanding visuals, and are played by millions of people. 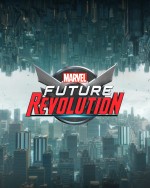