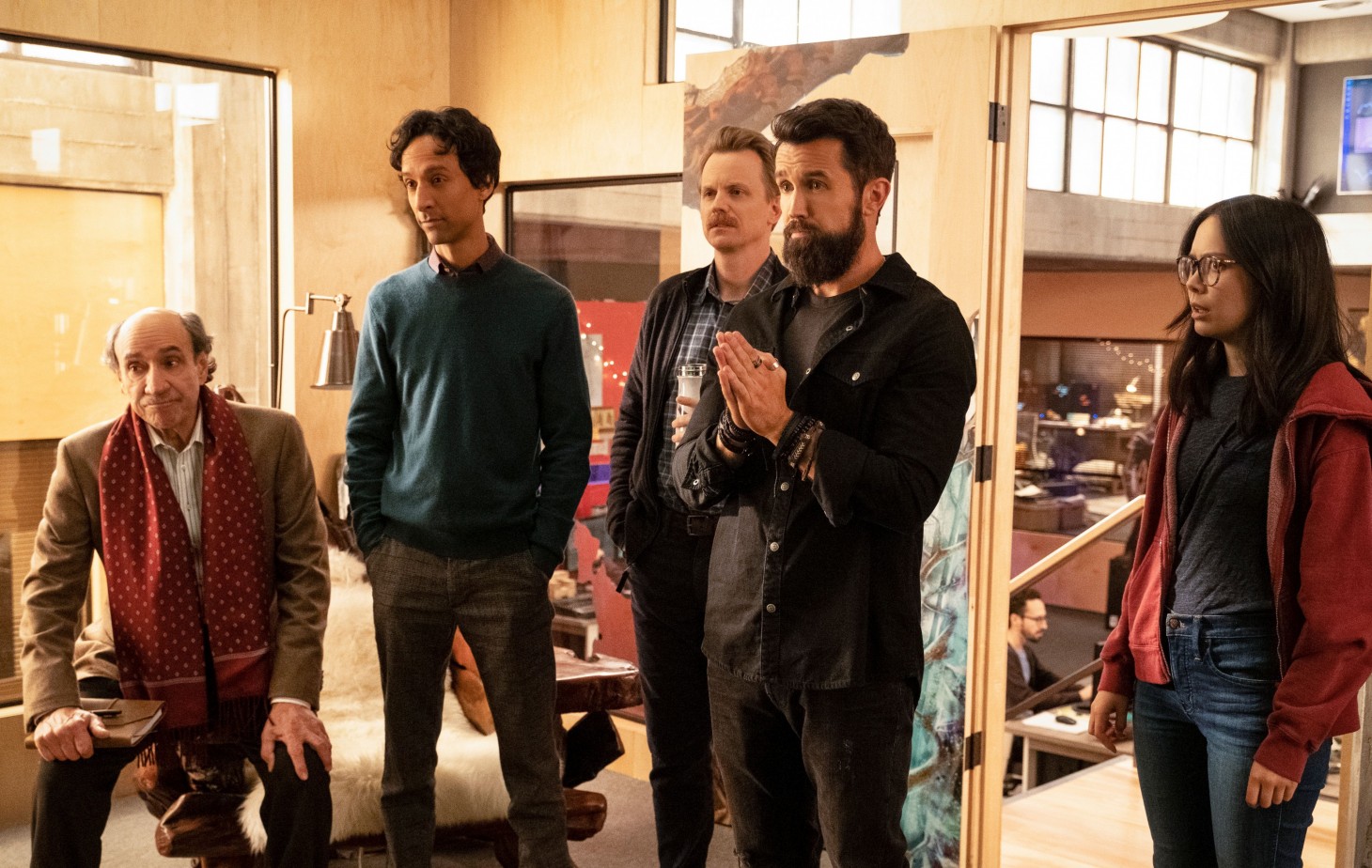 An Interview With The Minds Behind Mythic Quest: Raven’s Banquet

Mythic Quest: Raven’s Banquet is just a day away from its launch on Friday, February 7. The Ubisoft and Apple TV+ sitcom comes from It’s Always Sunny in Philadelphia’s Rob McElhenney, Charlie Day, and Megan Ganz. The comedy tackles the challenges of making games by taking us inside a fictional game development studio and showcasing the issues the characters face in its day-to-day operations. Expect big personalities to clash, as the team desperately tries to keep their successful MMORPG interesting and profitable. Ahead of the show’s debut, we chatted with some of the creators and executive producers (McElhenney, Ganz, and David Hornsby) to see what went into making it.

Why did you want to do a show centered on the gaming industry?

McElhenney: It was really born out of a meeting that I had with Ubisoft, where they were the ones that were interested in doing something in the gaming space. I wasn’t necessarily that interested. Mostly because the things that I had seen in the last 20 years in anything in popular culture that were dealing with the [video game] industry and the people that work in it always just felt like it was making fun of the community, and that was something that didn’t interest us. Then [Ubisoft] said, ‘Hey, will you come up to Montreal and just talk to some of the people that work in the studio?’ And I figured, 'Okay, I'll go up to Montreal for a couple of days. And, at worst, it's a free trip to a city I've never been to.' Within 10 minutes of being in there, I realized, ‘Wow, this is just an incredible place to set a TV series,’ mostly because what they do is so specific, and so large, and so worldwide. And yet, the people that are creating those games are just like anybody else that is working in an office building, really just trying to navigate their work with the dynamics of their peers.

Hornsby: Yeah, I think anytime as writers you can find a world that’s unexplored yet still relatable and also provide very specific storylines, that’s really exciting. We are in a world of like 600 shows that are out there right now, but we don’t have a half-hour comedy about the video game world.

What made you pick an MMORPG as the focus for this series?

Ganz: We liked the idea of an MMO because we wanted to feel like we were tracking people who had created an ongoing world. The stakes are so much higher with an MMO because you have players that have dedicated years of their lives to your game, and every change you make they react to. We envisioned our characters a little bit like Greek gods, and they're messing with mortals and the mortals sometimes push back against the gods. We also liked that with an MMO you don't have to track necessarily whether the game is a success or a failure. It was already a success at the beginning, so we knew that we could deal with each season being an expansion that they created, or that they could add a new weapon or a new character. It is an ongoing story, as opposed to just one story of a game that came out once and then that's what it was. The MMO was the only thing that felt right. 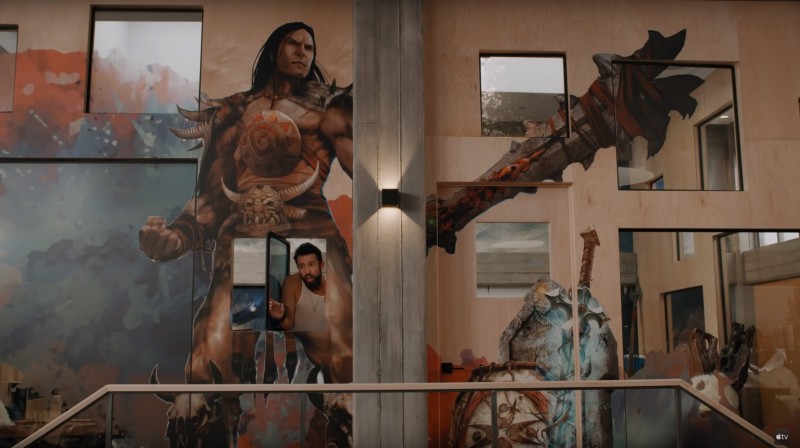 The show touches on a lot of real-world topics, such as labor unions, the difficulty of advancement for women, and the rise of streamers. Why tackle these topics?

McElhenney: We wanted to make sure that it felt authentic and that it wasn't pandering. There are some really difficult issues that certainly we as an entire culture are wrestling with right now, but very specifically in the gaming world. We wanted to make sure that it felt true to the experience of the people that are not only working in the industry but also the recipients of the fruits of their labor, the players themselves. And while, yeah, there is a fair amount of toxicity in the community, we felt that that's probably really five or six percent of the industry at large. We wanted to focus mostly on the everyday issues that [developers are] dealing with in the offices. One of those things happens to be, for example, crunch, which we recognize it's a labor issue, but it's also a personal issue. It’s something that's affecting people, hundreds of people, if not thousands of people across the globe, who are doing everything they can to make these games for people.

Ganz: With crunch specifically, we talked a lot about how the people [who] are complaining about the hours, they don’t want to care about the game less; they just want to be compensated fairly for the amount of work that they're putting in. We didn't come at it from an angle of like, ‘Oh, these lazy employees.’ It was like, ‘These people are dedicated and they put their lives into these games.’ You understand their perspective, but you also understand the pressures that other characters are under [with] keeping costs down. They have to keep the studio profitable. Then you start to see both sides of the issue. I think that’s how we kept it funny. It doesn't seem like one person is necessarily being screwed. I also think our cast is really great at feeling very human, [showing these characters are] trying their hardest and they want people to be happy.

How was it working with Ubisoft, especially with these more difficult discussions?

McElhenney: One of the great things about working with Ubisoft from the very beginning –I remember saying to them, ‘Look, if we're going to do this, we can't pull any punches.’ We can't do an episode about crunch and have you step in and say, ‘We don't feel comfortable with you doing this because of A, B, and C. Then we went to Apple and said the same thing. We wanted to make sure that our partners recognize that this is a true issue. And if we pretend like it isn't, then it's going to feel like we’re pandering. To their credit, all the way through they said, ‘Absolutely. This is something that the community has to deal with, wrestle with, and reconcile, and you should be doing it in the show.' 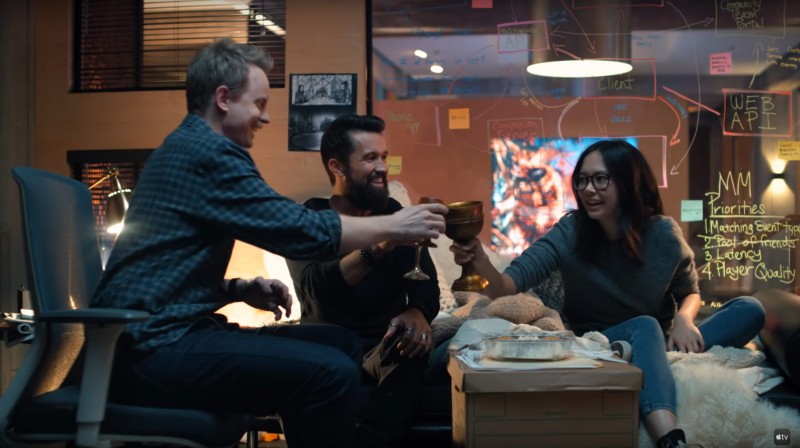 The relationship between creative director Ian and lead engineer Poppy drives a lot of the show. What was important to you when creating that tension and their overall dynamic?

McElhenney: Really in any great sitcom, it’s so much easier to write when you can stick people in a situation and they’re forced together. Whether it’s because they’re related to one another or because they work together. In Sunny, they’re forced together because of their failure. So we thought it would be interesting if we do a different show where the characters are, instead of morons, incredibly intelligent, gifted, and driven. They’re stuck together because of their success. Ian is really, really good at this one thing and Poppy is really, really good at this other thing. Without each other, that one thing would flounder, but put together, they thrive. And yet, they drive each other insane. That conflict right there is just the birth of all comedy.

Ganz: It was really important for us to also make sure that Poppy had just as big of an ego as Ian did. If you have one person who’s making another person’s life a nightmare, that’s not really that fun to watch over an extended period, but if you have two nightmare people that are making each other’s life hell, then you can watch that forever. So it was really important to make sure that Poppy was not the person you felt bad for – that you saw she fancies herself a genius [and] she thinks she’s always right. And so, you would be able to laugh when she falls on her face occasionally, but you also want her to succeed. That was the level that we were trying to make with the two of them there.

Hornsby: I think one of the themes is that, in order to be great, sometimes it takes that confidence, arrogance, and vision, but it also takes humility. I think for both those characters, they have to constantly re-up that and learn that.

Mythic Quest has already been renewed for a second season. Is there anything you didn’t get to do in the first season that you’re hoping to do next?

McElhenney: Well, we’ve already started writing and we have lots of different ideas...

Hornsby: We’re definitely not going off any market research because the product hasn’t been tested yet. [laughs] We’re still making a show that makes us laugh, and you know what’s fun about this particular part of our journey is that it’s just the beginning of the show, unlike where we’ve worked together on Sunny, where we’re 14-going-on-15 seasons in. Right now, there are so many stories to tell and we’re finding it’s really fun and easy to put these characters in different situations.

Ganz: I think the second seasons of shows are usually some of their greatest. It’s like, in the first season you’re building this house and it takes a lot of work. You don’t know if you’re putting the walls in the right place, because everything feels like you’re on quicksand a little bit. Then by the end of the first season, [you say], ‘Okay, well, that's where the walls are, that's where they're staying, that's how many stories it is.’  And so, therefore, you just get to decorate, which is so much more fun. We’ve established these characters; now we just get to mix them up in fun ways that you haven’t seen before. We’re doing interesting pairings that you didn’t necessarily see in the first season.

For more on the show, you can read our impressions of the complete first season.