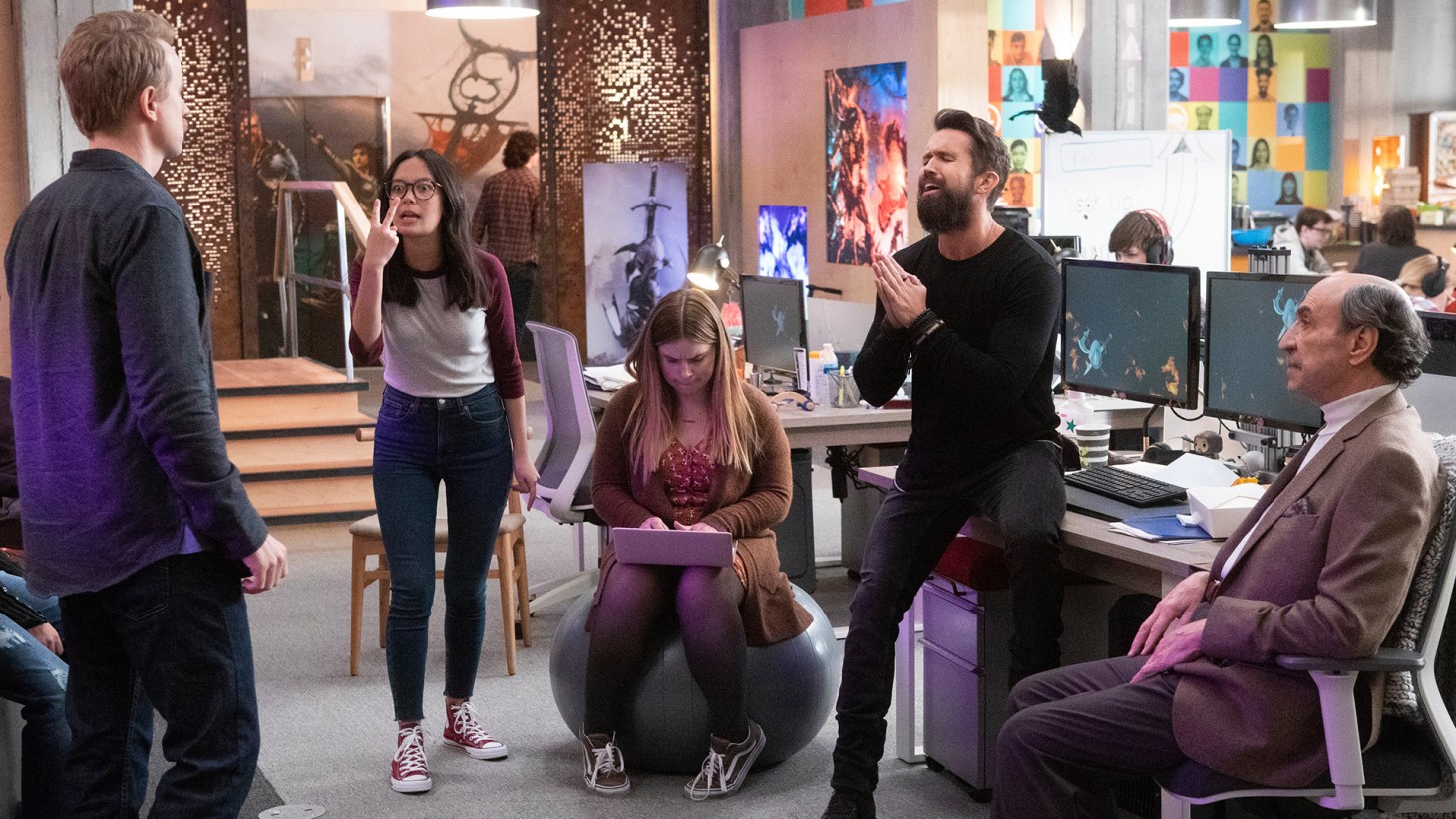 A lot goes on behind closed doors before a final product ships, and even then it’s rarely the end of the line. In a world of living games and increasing financial demands, studios constantly need to find new ways to keep their games relevant, and most importantly, their fans happy. Mythic Quest: Raven’s Banquet is a new, exclusive Apple TV+ comedy by It's Always Sunny in Philadelphia’s Rob McElhenney, Charlie Day, and Megan Ganz that shows this struggle firsthand, shining a light on the best and worst parts of the process. The way the show uses smart comedy to entertain and address these moments is what makes it worth a watch.

Note: This series doesn't debut until February 7. While I attempt to avoid any spoilers, be aware these impressions are on the full nine episodes of  the unreleased show.

The sitcom shows the inner workings of a fictional studio striving to keep its successful MMORPG thriving. During the first season, the team faces everything from exposing a hacker to dealing with the game becoming popular among white supremacists. You see intense arguments that break out over things like implementing a shovel and how to end a storyline that they were just improvising. There’s never a dull moment in the studio, and these situations are dealt with in entertaining ways that make you keep watching just to see what will happen next. For instance, the reason for a digitized version of Rob McElhenney's character appearing in the MMORPG and interacting with players is much more delightful than you’d expect.

Various roles within the industry are depicted in Mythic Quest, from QA testers to community managers. However, the two at the heart of the show are egotistical creative director Ian (played by McElhenney) and intelligent lead engineer Poppy (Charlotte Nicdao). Both actors do a fantastic job displaying the tension between these characters due to their different skill sets. Poppy is all about logic and brings to life Ian’s ideas in the game, while Ian’s creativity is what keeps the game interesting and mostly gets him all the glory. This relationship is a highlight of this first season, and there’s good payoff in the end for seeing them work through their issues (even if it only brings about more). Poppy and Ian's narcissism can make them frustrating to watch, but I was still rooting for both of them – a testament to the writers letting you see their flaws and where they’re both coming from.

Even if you do get annoyed with Ian and Poppy, Mythic Quest has other interesting personalities to engage, and the supporting cast is nothing short of fantastic. Danny Pudi nails the role as Brad, the head of monetization, who is constantly testing how far he can go to increase profits. Similarly, Jessie Ennis brings great energy to Jo, an overzealous assistant with anger and jealousy issues. I always looked forward to seeing how she’d react in various situations, such as when the studio forms an ethics committee and when she tries to deal with a demanding streamer.

While things can get a little crazy, the comedy never gets so over-the-top you can’t see what the writers are getting at. I expected more laugh-out-loud moments, but Mythic Quest is more subtle with satire, reflecting the state of the industry. This is actually when the show is at its best.

I was impressed by how many topics Mythic Quest tackled, touching on crunch, microtransactions, and the extra challenges women face. My favorite episodes are “A Dark Quiet Death” and “The Convention." The former is an episode that actually takes a step back from the main cast and focuses on a couple who create a game together, serving as a cautionary tale about marketing and losing sight of your initial vision. It left me with an uneasy feeling I couldn’t shake about the concessions creators sometimes make just to be able to do what they love. In “The Convention,” a secondary storyline focuses on a group of young girls wanting to go into game development and visiting the studio. The episode addresses multiple things that still need to improve for women in games, but also leaves you hopeful as it shows there’s more awareness and work going into this area.

The creators clearly wanted Mythic Quest to be something more than a show that jokes about video games, and their work feels like an authentic (if not exaggerated) look behind the scenes of game development. Things are just getting started at the end of these nine episodes; this first season feels like a proving ground for the concept, with a focus on establishing the characters and studio. Mythic Quest has so much promise and things to build off of for the second season (which is already confirmed). I know I’m looking forward to seeing more.