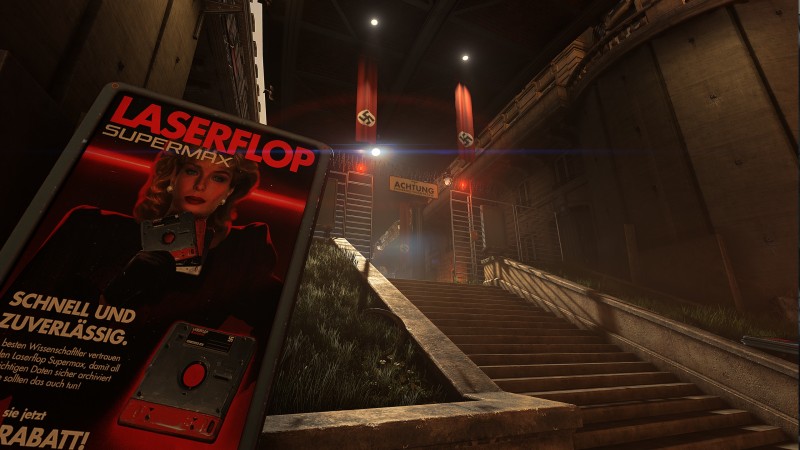 When Wolfenstein: Youngblood was announced at E3 2018, many fans of the series raised their eyebrows at the news that the game would be set in the '80s and star protagonist B.J.’s twin daughters. Bethesda eventually clarified that Wolfenstein III is still happening, confirming Youngblood's status as a side chapter to the planned trilogy. So, just what is Youngblood’s ultimate story connection to the mainline entries? Is it an alternate universe? Is it set after the events of Wolfenstein III? Before Wolfenstein II? Maybe it takes place before AND after Wolfenstein III, Godfather Part II-style? With Youngblood finally out today (check out our review here), we actually have specific plot points we can focus on to talk about what Wolfenstein III’s story might end up being.

What follows is a spoiler-filled dive on major plot points so if you don’t want to be spoiled on Youngblood's story, now’s the time to turn back.  To clarify: All the following is speculation, with no information from MachineGames on anything related to Wolfenstein III, but hey, speculation is fun and my conclusions were pretty accurate for The New Colossus the last time I did this.  So let’s get to it!

Youngblood doesn’t actually have that many story beats outside of its introduction and ending. It delivers a lengthy intro before B.J.’s daughters go to Paris to search for him, but the majority of the game fixated on letting you run amuck in Nazi-controlled Paris. That said, the opening does deliver some key bits of information:

The main chunk of the game doesn’t flirt with answering narrative questions. Most of the writing is dedicated to in-game chat between Abby, Soph, and Jess that draw out their personalities. It’s only when we reach the end of the game that Youngblood starts doing some heavy lifting for the saga again (briefly, anyway).

At the conclusion of their journey, Jess and Soph meet B.J. in an underground complex. He’s fiddling with the God Key, an ancient Da'at Yichud artifact he uncovered in The New Colossus that Set Roth regarded as powerful (but couldn’t explain what it does). Here, B.J. goes into a bit of a vague lore breakdown of what happened in the years that took place between The New Colossus and Youngblood. Some key points:

B.J. ends his rambling with a twist: Wolfenstein has a multiverse and the God Key is somehow the way to traverse that sea of multiple universes. He talks about how he’s seen doors into multiple worlds, including one where he and his daughters are happy and at peace.  MachineGames’ take on Wolfenstein has often flirted with the idea of multiple timelines from the beginning, with the choice to save Fergus or Wyatt kicking off The New Order. So the acknowledgment of a multiverse is a big deal because it implies that Wolfenstein III will finally tie that choice at the beginning of the series to the narrative in a cohesive, unifying way that makes that dilemma something more than just a neat but arbitrary thing you do.

However, the existence of the multiverse also makes me wonder if we’re going to be time/universe-hopping in the next game. Could we be playing B.J. as he leaps from universe to universe, trying to save his own? How interesting would it be to play as middle-aged B.J. taking on Hitler in one level, and then one of his daughters (or old B.J.) in the Youngblood era the next? The modern Wolfenstein has had no trouble mining pulpy aspirations to create wildly memorable scenarios, like the bizarre execution scene in The New Colossus, so embracing something as expansive and weird as multiple universes is both promising and fitting within the narrative ambitions of what’s come before.

Despite not adding a lot of story to Wolfenstein’s lore, the few crumbs of details (as well as that final revelation) have given us an idea of what to expect from the next game at least on a thematic level. It’ll probably be a while until we hear anything about Wolfenstein III given the only confirmation we have is Bethesda acknowledging it’s in development but hey, there are more than enough Nazis to kill in Paris to pass the time until then.