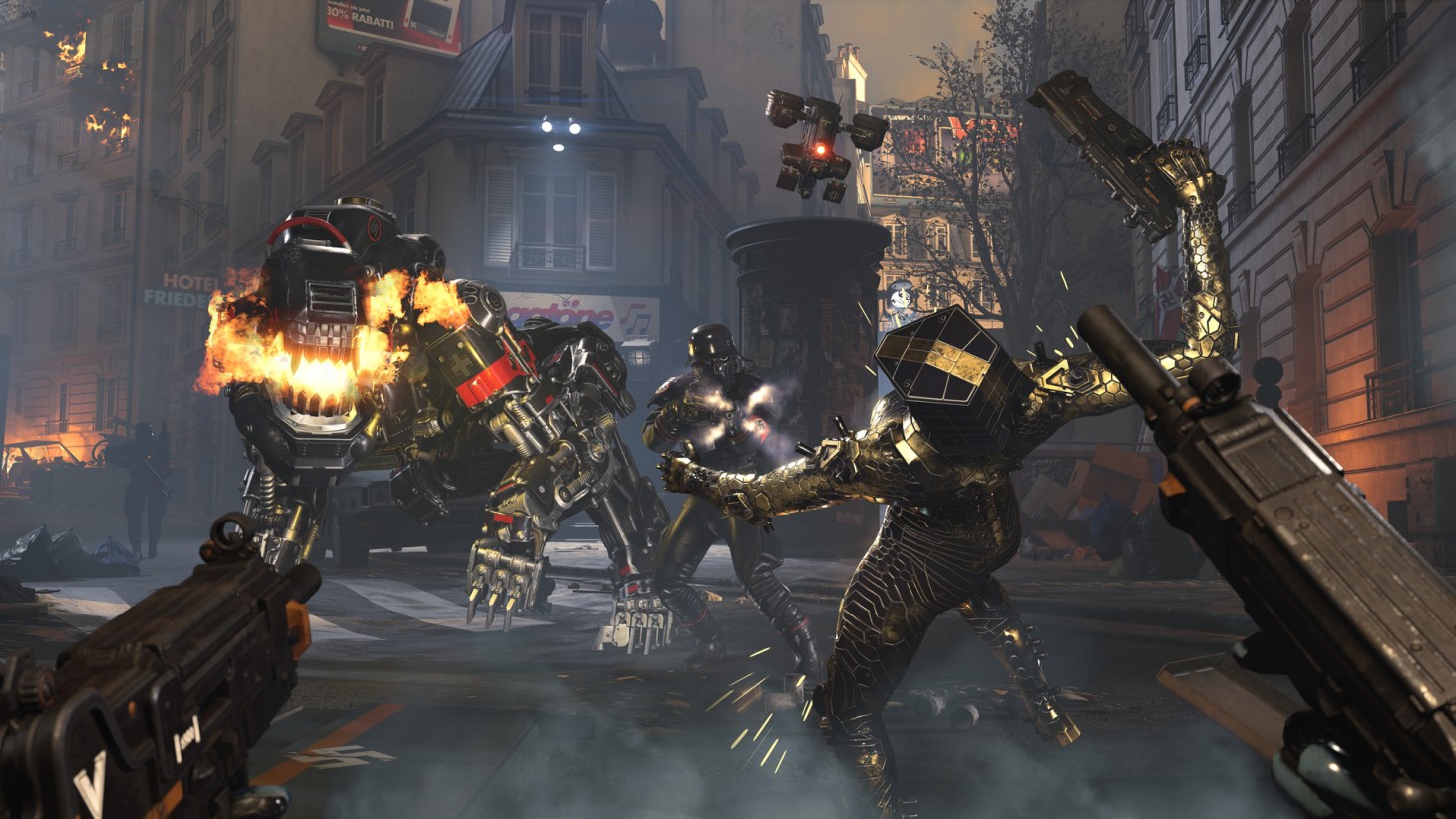 Wolfenstein II: The New Colossus was easily one our favorite shooters and story-driven experiences of 2017. The teeter-totter balancing act between somber exploration of a world gone to hell with frantic, pulp-laced action has made Machinegames' take on the classic series a unique experience in the world of games. Youngblood looks to match the frenzy of the previous games (as well as their habitual onslaught of memorable WTF moments) by jumping nearly two decades forward in the timeline and focusing on B.J. Blazkowicz's daughters as they search for their missing father.

During that time, the world has obviously changed. A recent trailer offered us a snapshot of what America and Europe, as well as the members of the Kreisau Circle, have been up since then. For every answer the trailer presented, more questions sprang forth. Here are the biggest ones we want to be answered during the course of Youngblood.

Warning: This article assumes you're familiar with the basic events of what has happened so far in the series, so spoilers are ahead for The Old Blood, The New Order, and The New Colossus.

What Is The God Key?

Introduced during the last third of The New Colossus, the God Key is a Da'at Yichud artifact that mystifies even the brilliant yet eccentric scientist Set Roth (essentially the Doc Brown of the Wolfenstein universe). The artifact isn't explained but Set's awed response to it makes us think that this will doo-dad plays a big part in either Youngblood or the confirmed but unrevealed Wolfenstein III. We hope that we at least get some insight into what it is during Youngblood, even if Machinegames doesn't reveal all the specifics of what might be Wolfenstein's answer to Marvel's Tesseract.

B.J. isn't the only one missing. During the Youngblood trailer, we saw no sight of Set Roth, Max Hass, Bombate, Paris Jack, Horton, Fergus, Wyatt or The Professor. Given the years that have passed, it's more than likely Set Roth and Horton are dead due to age (though miraculous technology keeping them alive certainly isn't out of the question in Wolfenstein's world). However, we're hoping that Youngblood acknowledges these absences in an interesting way and lets us know where these weird, lovely rebels have gone – even if it's into the ground.

What Has Happened To America Since The New Colossus?

The New Colossus ends with B.J. and crew carving up Frau Engel on live television and then kickstarting a revolution. A massive amount of time has passed since then. The Youngblood trailer opens up with a flash of a dossier on B.J. revealing this his place of residence is in "Liberated America." Does that phrase mean that America has fully been liberated or only sections of it? Glimpses of Grace working with the FBI suggests its the former and that the revolution was a success, but we won't know until the game is out, obviously.

Does Youngblood Take Place After The Trilogy?

Has B.J. already slain Adolf? Will he have the showdown with the genocidal, delusional maniac (likely encased in a big robot body)? Maybe his daughters will actually be the ones to put a bullet in Hitler's skull.

Is Co-Op The Future Of The Series?

Co-op-oriented shooters have evolved dramatically this past generation, with shared-world series like Destiny and The Division becoming the primary location for folks who want to run and gun with friends. However, Youngblood seems to be a throwback to co-op experiences like Halo, where you play through a traditional campaign with a friend. We don't know what co-op focused systems Youngblood will add (if any) but we're curious to see what Machinegames and Arkane are bringing to the table given that neither studio has made a multiplayer experience before.

Moreover, will Wolfenstein III have a similar multiplayer component or will we return to taking on the Nazi empire as bloody loner B.J.

What's The Big Payoff For The Timeline Choice?

The New Order opens by letting you choose whether your cranky comrade Fergus or fresh-faced newbie Wyatt bites the dust, with the other living to help you fight against the Nazi regime. This choice creates a diverging timeline for the player. In both The New Order and The New Colossus, Wyatt or Fergus' presence determines a number of things, including which characters show up during your playthrough. For example, picking Wyatt in The New Order meant you got to hang with that world's version of Jimi Hendrix but it also means that you lost out on talking philosophy with a gender-swapped version of Nikola Tesla.

In The New Colossus, certain scenes played out differently among the crew and you were given a special weapon depending on your choice.

So, what's the big payoff? Is there one? Will a radically different ending emerge at the end of the trilogy based on your timeline choice? Will Youngblood even acknowledge the timeline decision? The Old Blood didn't, but it was a prequel to The New Order. How Youngblood accounts for player choice will be interesting to see.

Has B.J.'s Head Ever Fallen Off His New Body?

Who Are Jess and Soph Blazkowicz?

The biggest question that Youngblood has to answer is just who are B.J.'s daughters? The two trailers for Youngblood have painted a portrait of two young women who are, like their parents, really damn good at killing Nazis. But both Anya and B.J. also existed outside of their profession in a way that video games rarely grant their characters. They are people. They have regrets and desires. We're hoping that Youngblood gives its duo the same treatment.

For more on Wolfenstein Youngblood, check out our trailer breakdown as well as our look back on the entire Wolfenstein series.