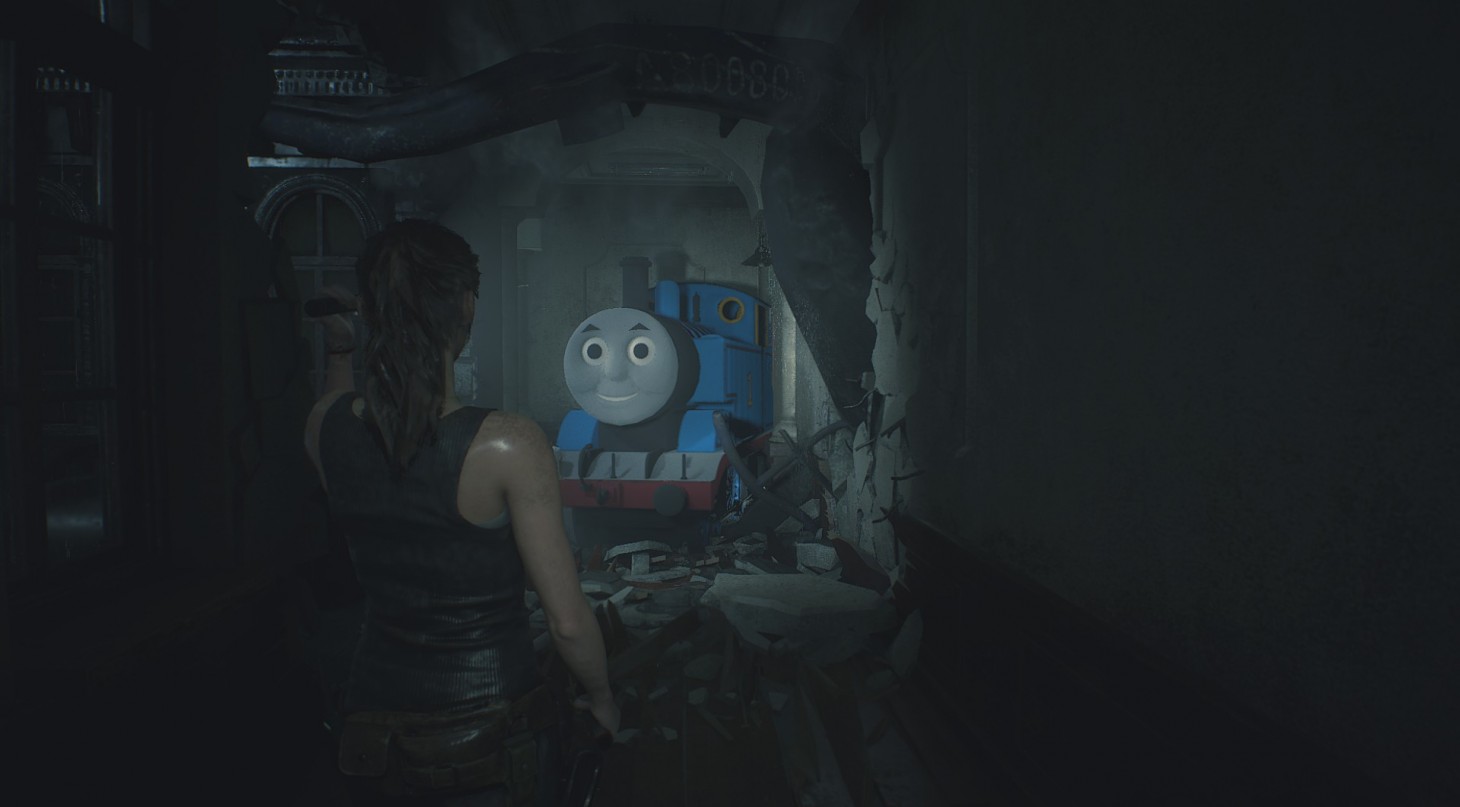 These Are Resident Evil 2's Most Hilarious Mods

Resident Evil 2 is a terrifying game. Your ammo stock is always teetering on empty, zombies you thought you killed reanimate (again) when you least expect them to, and there’s a menacing, fedora-wearing figure called Mr. X who hunts you through the corridors of Raccoon City’s police station. To classify this game as “horror” is an understatement.

We knew Mr. X packed a punch, but this mod by MisterHecks shows how much heat the Tyrant is packing. “Beachboy X” gets rid of your nemesis’ imposing trenchcoat and fedora, replacing them with slick shades and, ahem, a little umbrella.

You knew it would happen eventually. This mod by ZombieAli swaps out Mr. X for Thomas the Train. For the full effect, we recommend using this mod in tandem with DJPop’s audio mod, which replaces Mr. X’s heavy footsteps with the whoosh of a chugging steam train and his default punch sound effect with the toot toot of Thomas’ whistle.

Mr. X can be as annoying as he is menacing. As we mentioned in our review, puzzle solving can become a bit of a struggle with the Tyrant following you around like a stranger at a bar who can’t take a hint. We’re not sure if this mod makes matters worse. Mr. Squeaky X by Jewelson replaces the sound of Mr. X’s identifying footsteps with an effect that sounds like he’s walking around in slippers made of rubber ducks. Does it make him less frightening? Sure. But it also gives you extra incentive to keep as far away from him as possible.

If Resident Evil 2’s zombies were hungry before, this next mod will make them thirsty. ToraNeko98’s Sexy Leon mod strips the protagonist down to a near-birthday suit, which isn’t the most practical apparel to protect you during the zombie apocalypse. The mod even gives him a shoulder tattoo that says “Rookie” to complement his RPD-branded beachwear.

Ignorance is not always bliss. This mod by Crazy Potato turns all of Resident Evil 2’s enemies invisible, including bosses! You’ll still hear Lickers shifting across the ceiling and Mr. X’s heavy (or squeaky) footsteps growing louder, but sound is now the only sense you can use to survive the night. (Pro tip: if you set enemies on fire, the flames will indicate a zombie’s location, helping you avoid them as you do your mad dash through the police station.)

Resident Evil 2 added free DLC last month that lets you play as Tofu, a literal block of knife-wielding bean curd. If you love Tofu so much, and one just isn’t enough, Snipzu’s Tofu Zombies mod turns all enemies into big blocks of mashed soybeans. For as funny as this mod is, it presents an interesting challenge to gameplay: how do you perform headshots? Do tofu have heads? We don’t know!

All Enemies Are Mr. X

The funny part of this list is over now, because this next mod sounds like a straight-up nightmare. Zealot Tormunds, a user on the Resident Evil modding forum, created a mod that replaces almost every enemy in the game with Mr. X. Tormunds suggests using flash grenades to assist in skirting large hordes of X but isn’t certain if the game is beatable with the mod installed. Actually, that is kinda funny.

We love Resident Evil 2, and so do many others, as the game’s already shipped more than four million copies. Check out Kimberley Wallace’s take on how the remake breathes new life into its protagonist Claire.