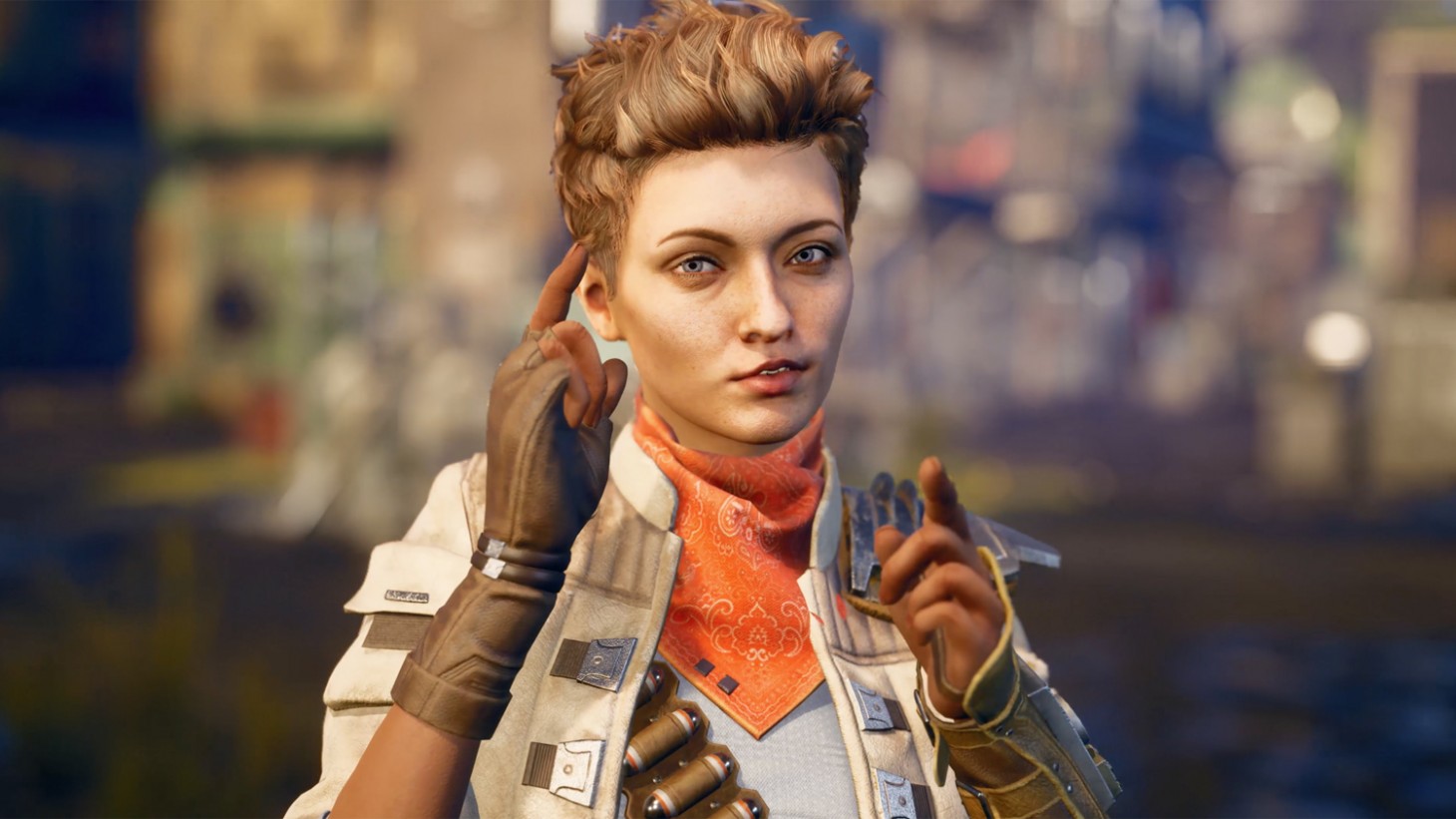 Everything We Know About Companions In The Outer Worlds

You may be exploring a faraway star system in The Outer Worlds, but that doesn’t mean you need to be lonely. You encounter other people during your travels who are willing to fight by your side and join your crew, and who enrich your experience by offering different perspectives. We talked to a team of writers at Obsidian to get specific info on three of the companions you can recruit, as well as various other tidbits about the studio’s general approach to these characters.

Generally, one writer handles all of a companion’s interactions
If you take a liking to one particular companion, odds are good that you have a single member of Obsidian’s writing team to thank. Though parts of the process are certainly collaborative, all of a character’s interactions are usually guided by one person for consistency’s sake. “It’s a lot easier to keep any character in the hands of one person, because everyone’s going to put their own spin on a character to some extent,” says senior narrative designer Carrie Patel. “The more a character changes hands, the more you’re getting multiple different executions, multiple different flavors.”

The crew dynamic is important
While the team wants the companions to be interesting as individuals, they also need to cohere as a group. They banter as you walk around, interact with each other on your ship, and bring different capabilities into combat. “We knew we needed companions with sort of that Firefly flavor,” says narrative designer Nitai Poddar. “We wanted them to be a band of, not quite misfits, but different personalities coming together on the same ship. And we knew we wanted a fairly confined number of them so that each would be individual.” 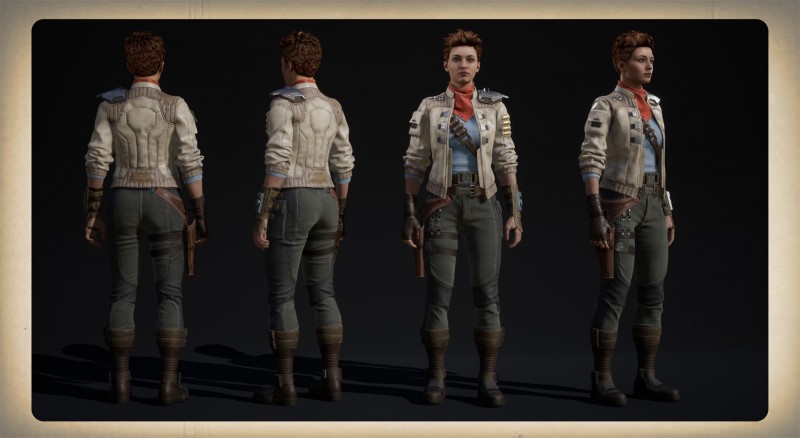 Profile: Ellie
“She a professional sort of pirate, but she also has a very mercenary outlook toward a lot of things,” says senior narrative designer Carrie Patel. “She’s fairly pragmatic, pretty easygoing. I think it’s important, when you’re talking about companions, to have a spread of dispositions. She’s definitely not someone who’s going to get too mad at your for being the bad guy. And she has a few things about her past that she’s tried to get away from.”

You encounter them early
Opportunities to recruit companions are front-loaded, to avoid the sense of under-developed characters joining late in the journey. “You encounter all the companions in the first third of the game, because it’s no fun getting a companion in the last hour,” co-director Tim Cain told us at the game’s unveiling.

They help in battle and beyond
You can bring two companions along with you when you leave your ship. In addition to their unique special attacks, you can also give them weapons to steer their approach to combat. You also benefit from a portion of each companion's key skill scores; if a lock is too difficult for you to pick alone, bringing the right companion might give you the boost you need. If you need an even bigger boost, you can take certain perks to increase how much you benefit from your allies' aptitudes. "We realized that companions could be used a lot more tactically," Cain says. "We wanted to put in skills that control that."

You can do quests for them
Every companion has something you can help them with. While these tasks varying in length (don’t expect them all to be multi-stage, multi-hour affairs), they give players a chance to get to know the companions better – and get rewards to improve their performance or customize their quarters. “Some problem that is essential to their character that is explored in that particular quest,” Poddar says. “And that’s also something we like to ask ourselves when we start fleshing out these companions: What is their motivation? What is driving them?” 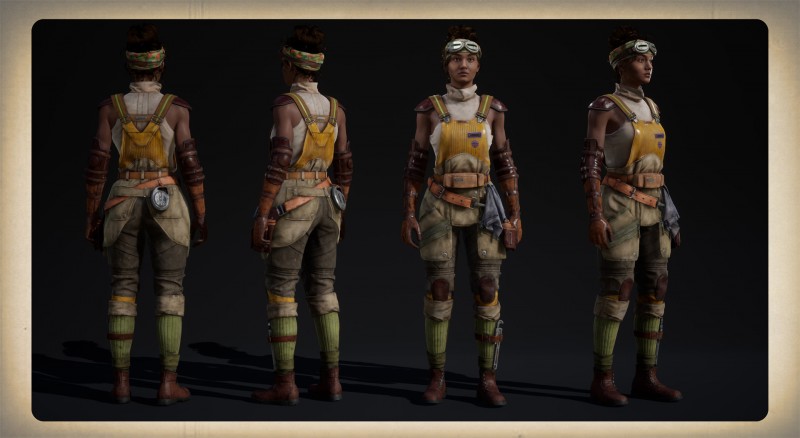 Profile: Parvati
“Parvati is a very sweet, naïve person,” says senior narrative designer Megan Starks. “She doesn’t really fit in with the community, because it’s all about conforming and putting the corporations first. As a mechanic, she likes to give personalities to the machines she’s working on and creating, and that doesn’t fit in very well with the society. So I think it’s nice to have two companions who are coming at it from opposite sides. Parvati saying ‘Oh, we should help these people,’ and then Ellie is a lot more like, ‘Well, me and mine.’”

Companions are cool, but not required
The Outer Worlds puts a big focus on player choice, and that extends to deciding whether or not you even recruit companions when you have the chance. Would you prefer to play as a loner? You can do that and finish the game, though you might miss some neat stuff. “With a game like ours, there’s a balance you have to strike, because you don’t have to recruit the companions,” Patel says. “You can have a full, complete experience of our game – minus the companion content – if you never recruit them. But at the same time, we do want them to feel very involved for players who choose to bring them along. While we have to be careful not to make them mandatory, we also look for ways to bring them in.”

Companions aren’t necessarily forever
When companions join, they aren’t swearing a fealty oath for eternity. If you do things they don’t like, they aren’t obligated to stick around. “We do have ways that a companion can choose to leave you,” says senior narrative designer Megan Starks. 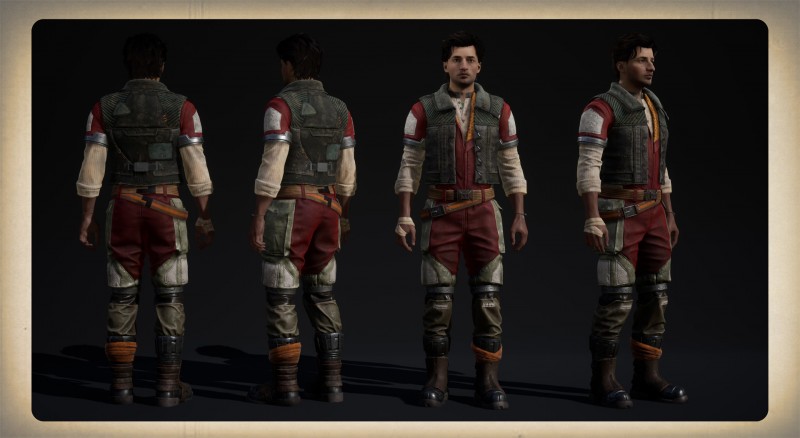 Profile: Felix
“Felix is a rebel without a cause,” says narrative designer Nitai Poddar. “According to some companions, he would also be a rebel without a clue. He’s a young, impetuous, brash kid who really loves fighting ‘the man.’ He doesn’t have a stable political philosophy beyond ‘smash the system,’ and he tends to get in trouble everywhere he goes. When the player finds him, he got into an altercation with his foreman, which may have involved his foreman making fun of his favorite tossball team – and that’s just not acceptable. Despite his problem with authority, Felix will latch onto the player very quickly.”

They aren’t governed by a morale system
If a companion does leave, it won’t be because of a gradual affinity erosion, or because you don’t give them enough random gifts. The game doesn’t quantify your relationships in that sense. Instead, their commitment to you is thrown into jeopardy depending on certain major choices you make. Plus, you will understand the characters’ personalities well enough to know their positions, so it won’t be a big surprise if they get upset when or if you cross the line. “Even if you lose a points-based morale system, I think you gain something by hand-crafting specific moments where a companion is like, “Why would you do this? You’re completely out of your mind!’” Poddar says. “And that also gives the player an interesting opportunity to say, ‘You might be thinking that, but here are my reasons why…’ and sometimes we can attach that to a persuade or leadership check, and that helps the player feel more rewarded.”

They are different, but unified
Companions have different (and sometimes directly oppositional) personalities and viewpoints, but they do have something that brings them together: You. “Them wanting to go with you unites them more than anything,” Starks says. “Because they still argue with each other, and it takes a while for them to get comfortable.” But they are also tied together by more than just physical proximity; in a world that values corporate loyalty and assimilation, they all have trouble finding what they want. “I think they all end up where they are, and they all end up willing to step back from where they start out, because they look at their situation and they realize something isn’t right or satisfying for them,” Patel says.