“Because three heads are good, but four is better.” —Jeza “Jeopardy” Verlayn

Destiny’s exotic weapons sport some extravagant looks. The sleek, Egyptian adornments and sun-shaped reticle of Vigilance Wing, the monstrous frame, pulsing conductors, and electrified bullet trails of Legend of Acrius – these weapons are as much about fashion as they are about function. Sometimes, though, the best bet is to just tie four different barrels on a gun, slap a mysterious power source onto it, and hope it works.

Cerberus +1 looks like what would happen if you tried to squeeze all the ballpoints of a four-color pen through the tip at once, broke the thing, and kept writing anyway. It’s a patchwork weapon built out of the barrels, stocks, sights, and various remnants from other auto rifles, and fans should be able to spot some familiar parts. “There’s some Origin Story in there, some of it is Khvostov-inspired, there’s a bunch of various guns,” says Greg Peng, Bungie’s senior sandbox designer.

Built by a Guardian named Jeza "Jeopardy" Verlayn, the Cerberus +1 uses a mysterious power source called the Photonic Heart to power its unstable physique. Though Jeopardy had other plans for the Heart (perhaps she would have sold it, or used it to power some sort other contraption requiring immense amounts of energy), she had to abandon them after crash-landing on the Tangled Shore, and think quick in order to avoid being ripped apart by its inhabitants. Using the scrap around her, she crafted the Cerberus +1 using the power of Photonic Heart, which is inside the battery casing you can see strapped to the side of the gun. 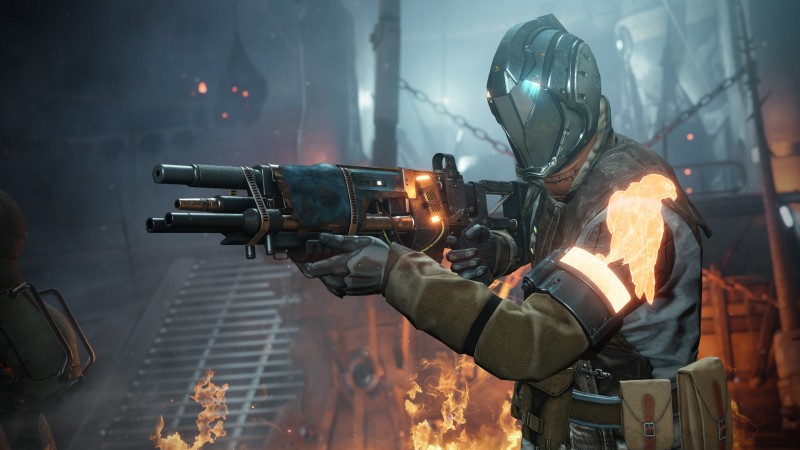 The improvised nature of the Cerberus +1 comes through in its visual design. The broken, rusted frame and barebones stock communicate a function-over-form design, while the duct clamps keeping the whole thing from falling apart mean it was likely built in minutes, not hours. And while Destiny guns tend to feature in-world ammo counters that tell you when you’re about to run out of ammo, Cerberus +1’s ammo counter is kind of busted; it can only tell you how much ammo is left for one of its four magazines at at a time, so the counter increments up and down as you fire. Don't worry about reloading, though: You reload its entire magazine stock at once, like you would with a regular gun.

The DIY look may not endear itself to everyone, but it’s worth it for Cerberus +1’s main attraction: Mowing down fodder and bosses alike with a constant rain of spread fire. The team admits the gun is directly inspired by Contra’s Spread Shot weapon (the gun’s early debug name was “SSSpreadshot”), and while its shots don't spread as wide as that iconic weapon's, it works wonderfully in the world of Destiny. Each of its four barrels fire simultaneously, leading to a constant spray of bullets in a large area. “It’s not really a gun you aim,” says sandbox design lead Josh Hamrick. “You just point and try to get close.”

The weapon is best at point blank, where its spread is absolutely lethal. But as an assault rifle, it’s no slouch at range, either. “It’s tuned to kind of generally give the same DPS at most ranges, so it’s got this weird drop-off pattern,” Peng says. He also reassures me it’s not as erratic as a shotgun or submachine gun. “The middle bullet is always in the middle, so you can always guarantee that at least that middle bullet will hit.” So while it might not be as much of a threat from afar, you should be able to confidently pick off low-health targets who manage to flee your initial onslaught of bullets.

Cerberus +1’s perks also help make it versatile. The Spread Shot Package perk focuses the spread while aiming down the sight, making it more versatile against lone, distant enemies. That also means if you’re being swarmed, hip-firing will give you the widest spread possible to push them back.

Fittingly, the gun's other perks are all based around its barrels. Its perks include Rifled Barrel (which increases its range but slows down its reload time), Fluted Barrel (which makes it easier to wield and aim), and Full Bore (which further increases its range, makes it less stable, and lowers its handling speed). It's a strange confluence of perks that seem contradictory, but that's to be expected when the gun itself is also cobbled together from parts that shouldn't really fit together.

Playing through a strike with the weapon, I was delighted to see a bevy of damage numbers pop up as I riddled enemies with bullets. “It’s a total mob killer,” Peng says. It also works beautifully against bosses with large weak points, such as Servitors. And by beautifully, I mean that seeing a dozen or so yellow, critical-hit numbers pop up on my screen put a dumb smile on my face. And while I'm a hardened ADS player, I was much more inclined to hip-fire when I knew I could take down multiple enemies at once with the wider spread. It felt strange (and great) to have the crowd control of a shotgun or grenade and the reliability of a kinetic weapon all in one package. 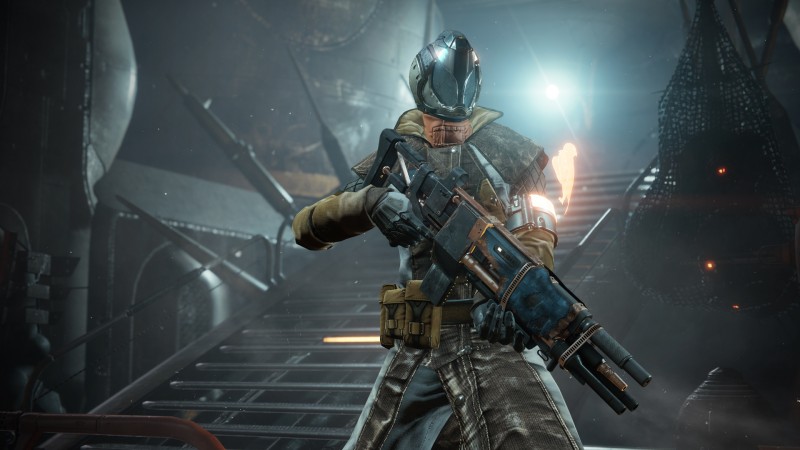 This combination of reliable aim and ridiculous fire rate makes it good for crowd control, but don’t expect it to dominate in the Crucible. “It’s kind of a specific use case,” Peng says. Its spread makes it hard to beat opponents at range, and other close range weapons should fare better in tight quarters. If you need a close-range weapon that doesn’t fall off completely as your opponent flees, it should make for a solid pick.

The spread shot does have its perks, though. “I find it useful for airborne encounters, since it’s easy to hit with,” says senior gameplay designer Claude Jerome. The range of its shots also makes Cerberus +1 useful for unloading early in order to catch unsuspecting players around corners, since you don’t have to guess as diligently about where your opponent’s head might be. Its wide spread also means you'll likely catch a few stray kills you won't get with most other weapons, the way you might with Hard Light's bouncing bullets.

During my time with Forsaken’s various areas and features, Cerberus +1 became a trusty ally. Since it's a Kinetic weapon, you won’t have too much trouble finding ammo for it. I ended up using it so much I forgot other weapons didn’t have spread shot, or, at times, even existed. And while I likely wasn’t maximizing my damage potential, I was able to hold my own against Forsaken’s tougher enemies at most ranges with it without having to switch weapons. It’s powerful and reliable, which is everything you can ask from a weapon, flashy exterior or not.

Plus, you just gotta love all the numbers it puts on the screen.

For more on Destiny 2: Forsaken, such as our rapid-fire interview with leads Steve Cotton and Scott Taylor, a look at both of the new locations, and a deep dive on Uldren’s Baron allies, click on the banner below, and make sure to come back throughout the month for more coverage. You can also expect to see Cerberus +1 in action in some of our upcoming video features.