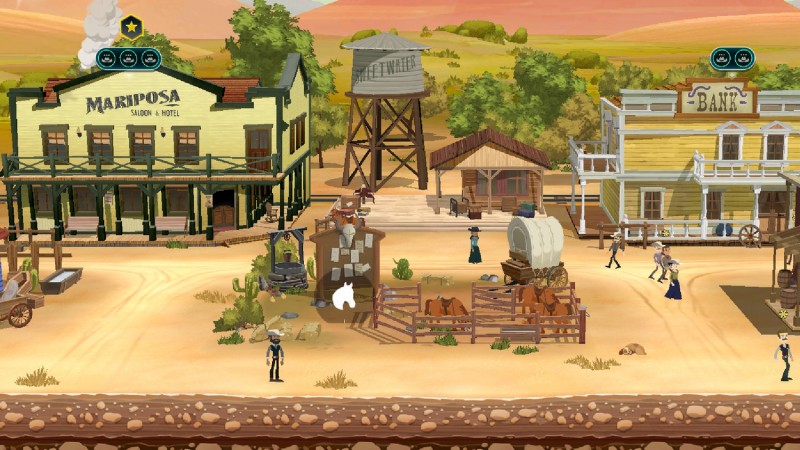 HBO wrapped up the second season of Westworld last night, answering a few questions and sprinkling more than a few new ones to keep the show running. Warner released a mobile game based on the sci-fi Western last week, which poses its own question: Is this thing worth playing? After spending several days with it since its launch, the answer is mercifully simple: no.

The game bears more than a passing resemblance to Fallout Shelter – to an extent that Bethesda has filed a lawsuit claiming that developer Behavior Interactive, which worked on Fallout Shelter and Westworld, stole code from Fallout Shelter for this new game. Regardless of the merits of the case, comparisons between the two games are both obvious and helpful. In both, you manage a community of sorts, though in Westworld your attention is divided between long-term and transient populations.

In Westworld (the show, in-universe park, and mobile game), technology has advanced to a point where the Delos Corporation has created synthetic humanoids virtually indistinguishable from their human counterparts. These creations (called “hosts”) populate a Western-themed amusement park, where people (called “guests”) pay to live out their wildest fantasies. You want to rob a bank or hunt down cattle rustlers? Hang out in a brothel and bump uglies with robots? Or maybe just walk down a street and murder everyone who crosses your path? Go nuts! They’re robots!

The show delves into the ethical issues that surround such activities, which are further complicated when some hosts gain sentience and realize that they’re getting a bum deal. That’s not something the game really gets into, at least not in any interesting ways. Instead, your job is to manage the park and try to keep things running as best you can. That means building new hosts, maintaining the ones that you have, managing expansions, and all that stuff. It has a lot of potential, but at launch it’s largely a big disappointment.

I’ve run into a couple of major problems in the hours I’ve spent playing the game. First, you don’t do a whole lot of “playing.” You’re inundated with a lot of different interactions at first, but once you establish a rhythm it’s clear how shallow most of them are. Most notably, the expansion element, in which you build out different sections of the Westworld park, as well as the underground Delos complex that’s the nerve center of it all, is oddly linear. Unlike Fallout Shelter, which gave players a variety of different options for how to run their vault, there aren’t many things to build here. I never had to make any difficult choices or was given a chance to optimize my base. It doesn’t matter where you plop buildings down.

Next, the host interactions are simple to a fault. Guests wander into buildings, and your job is to match them up with the hosts that best meet their desires. Maybe a guest wants a little romance or is looking for a robbery opportunity. After pairing them up, you wait for the interaction to end and then you’re given rewards. Your roster is limited at first, but you can build more hosts from vats of milky goo (it’s Westworld, don’t ask). If you have duplicates (and you will get duplicates, thanks to the lootbox-style structure), you can sacrifice them to level up those hosts, so they can handle more difficult guests. Mismatches can have painful consequences; if a guest is disappointed in the interaction, they’re liable to pull out a pistol and shoot your host dead. Once a host is killed, you have to repair them (with another in-game currency) before you can push them back into service.

There’s something kind of silly the first time you see the cartoony characters playing cards or sneaking into the back room of the saloon for a little hanky-panky, but these interactions have the charm and variability of setting an alarm clock – or a series of them. Once the interactions are done, it’s a matter of quickly cycling through the rewards, sending the dead ones to get repaired, and continuing the grind.

Most of the big characters from the show make an appearance, though they’re locked behind a lengthy series of random draws. Of course, you have the option of spending actual money to unlock them immediately, thanks to an aggressive suite of microtransactions. You do earn the premium currency through playing the game, but it comes at a miserly pace. If you want to unlock the main cast, you’re going to need to be extraordinarily patient or lucky, and quite possibly both.

Ultimately, the Westworld mobile game is – at least in its current form – impossible to recommend. At best, it’s a mindless time waster, which is the faintest of faint praise. Already plenty of those already exist on the iOS and Android marketplaces. Perhaps Warner will give players more to do via future updates. Until that happens, you’re better served re-watching the first season or trying to make sense of the finale, because are you kidding me?