Undead Labs showed that there's still plenty of life in State of Decay, despite the presence of all those zombies. The studio announced that State of Decay 3 is currently in development.

The teaser shows some off a solo survivor as she endures the elements and tracks a wounded wolf. Shocker, it's getting gnawed on by an infected deer!

The original State of Decay was fairly rough around the edges, but had some great ideas that set it apart from other zombie games available at the time of its release. The sequel built on the foundation laid before, adding some interesting new survival abilities and systems, but suffered from a launch that was plagued with bugs and a lack of overall polish. Since that release, Undead Labs has steadily updated State of Decay 2 through a series of patches and expansions, and it's in a pretty solid state right now.

Hopefully, Undead Labs has the clout (and Microsoft has the patience) to give State of Decay 3 the time and resources it needs to hit the ground shambling. 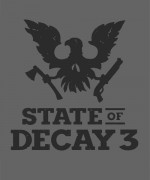