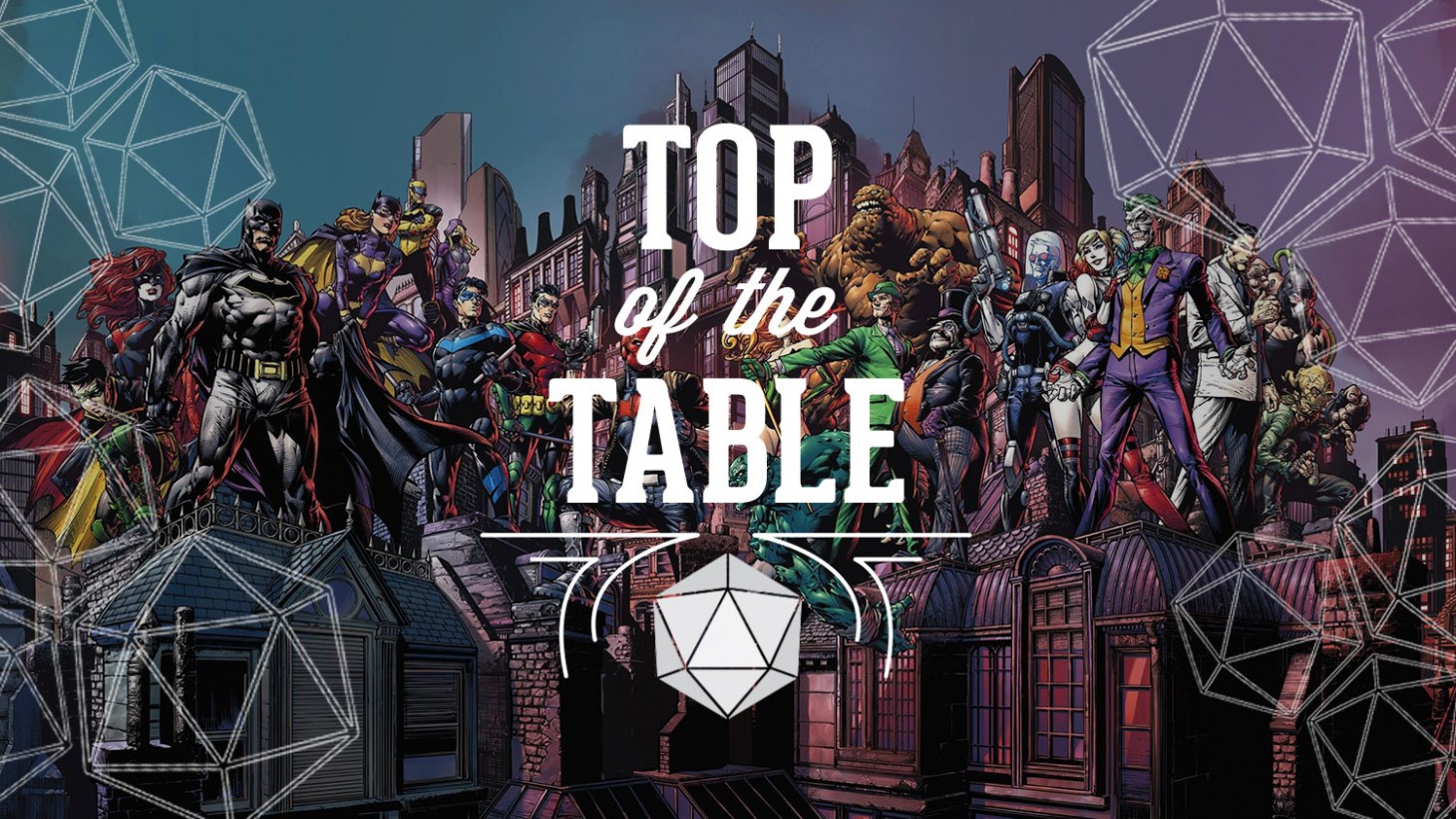 Sometimes you just want to roll some dice and wile away the weekend with a fantastic display of cardboard and plastic bedecked across your dining room table. For experienced tabletop gamers who want a particularly massive game to celebrate their love of all things Batman, Gotham City Chronicles is the project to which you should turn your attention. Behind a weighty bevy of intricate rules that govern every possible situation and character, this is a relatively straightforward game of dice-rolling, dungeon-crawling, and management of available actions. It adds up to a nostalgic and exciting romp with some of the best characters that the comic book medium has to offer; few graphic novels match the breadth of personalities on display in the Batman family. But with a high cost of entry and a significant rules barrier to full comprehension, this is a project targeted at a select audience. So let’s help you figure out if it’s worth the big investment.

Two to four players can take to the streets of Gotham in any given session. One of those players takes on the role of the villain, usually controlling one or more of the Caped Crusader’s plentiful nemeses, along with a coterie of henchmen. The other players control a who’s-who of the Batcave, with an impressive array of do-gooders that include Batman, Red Hood, Catwoman, Jim Gordon, or one of 20+ other characters or variations. From towering monstrosities like Clayface and Man-Bat, to intricate sculpts of Green Arrow and Huntress, the real stars of the show here are the miniatures – dozens and dozens of them in the core game – that litter any given session, bringing life to the adventures at hand with evocative poses and detail that captures the essence of each larger-than-life character. There are so many that the core game comes in two separate oversized boxes, each arrayed with gorgeous art of the characters hidden within. 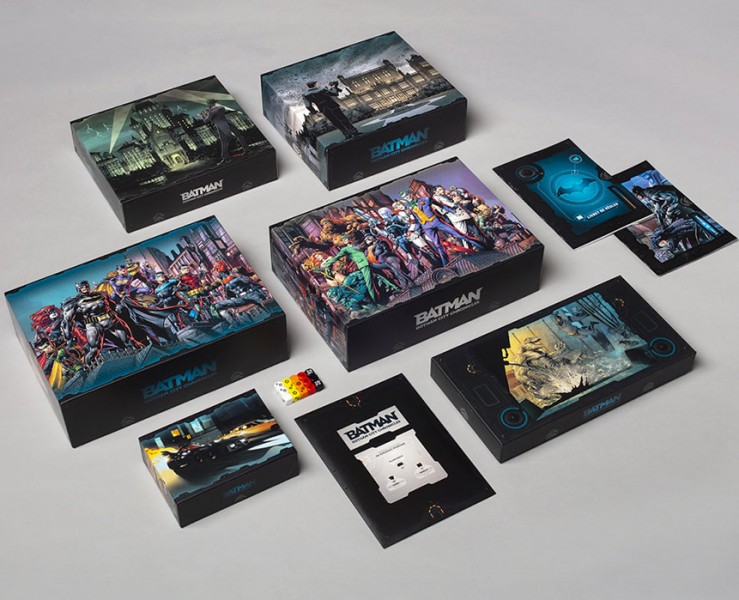 Those plentiful minis will live out their conflicts on one of the two large double-sided boards, each of which depicts a shadowy landscape of darkened alleys and high rooftops. The atmosphere of the Batman world is captured with aplomb, but it takes some time to learn the ins and outs of a given board. Sight lines, height differentials, and obstacles are all depicted on the map, but small icons sacrifice easy usability for shadowy aesthetic ambience. Once you learn a given board’s complexities, each provides a satisfying and rich landscape for skirmishes.

If the miniatures and board provide the visual flavor, the varied and thrilling scenario-based gameplay keeps you returning for one session after the next. Any given game of Batman: Gotham City Chronicles has you flipping to a preferred page of a lengthy mission booklet, including over 20 distinct sessions to play out. Each includes flavor text to set the stage, and clear details about miniature and token placement. Setup can be a chore, not just because there are a lot of pieces to lay out for any given session, but because you’re sorting through dozens of other components to find what you need. However, once everything is in place, I love the way each scenario changes things up. In one adventure, the Birds of Prey leap into action to halt Poison Ivy’s carnivorous plants from devouring the city. In another, Batman and Robin must find an antidote to Penguin’s newest deadly drug. I enjoy the distinction between each character (including the villains and their minions) and the various scenarios, lending an already robust replay an almost infinite quality of recombination. Would the fight turn out the same if Nightwing and Batgirl had confronted Scarecrow’s latest fear toxin plan, as when Batman and Azrael made the attempt?

From a gameplay perspective, Gotham City Chronicles follows in the footsteps of Monolith’s previous work on the excellently designed Conan board game. Both heroes and villains move and act using action cubes that represent energy. These cubes are the centerpiece of play, and they offer tremendous flexibility to the way you proceed through a turn, giving boosts to big important actions, but at the cost of later clutch rerolls, defenses, and even your overall health. A constant push and pull governs your choice of energy expenditure, knowing that each cube brings you one step closer to defeat. After a big spend, do you take a turn to recover and get a lot of those cubes back, or keep pushing your luck? It’s a rewarding core mechanic, forcing both the villain and hero players to think ahead to future turns, but occasionally bust out dramatic big actions at important moments – a perfect fit for the superhero milieu.

Beyond energy expenditure, much of gameplay revolves around dice-rolling for one of any number of actions, from manipulating and defusing a bomb to taking a swing at Bane. While optional rerolls provide some ability to control for bad luck, it’s worth noting that the game can swing wildly in response to especially good or bad rolls; you likely know if your gaming group is cool with that kind of cinematic tension and the resultant unexpected turns of fate, or if it rubs folks the wrong way. Accepting that swing, I was still impressed in the sessions I played with how well-balanced each mission ended up being, even with the vagaries of dice play in the mix. Situations can seem hopeless for the heroes, but carefully placed items can turn the tide. Likewise, big event moments for the villain can lend that comic book sense of an insane plan falling into place, suddenly putting the heroes in a tight spot. 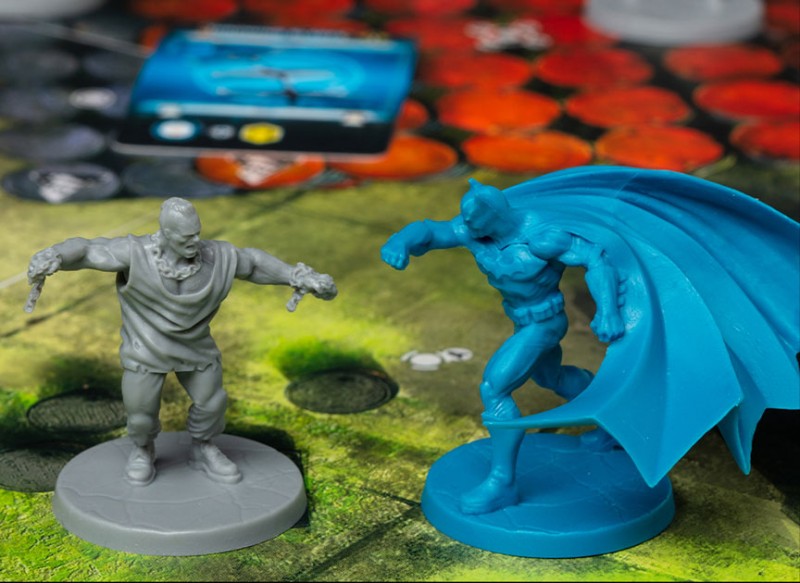 The many included miniatures feature stellar sculpts and detail, but they all arrive unpainted

In fact, I’d argue that it’s the intriguing approach to the villain player that really gives the game life and excitement. Managed from a large plastic “command post” with slots for all his or her cubes and tiles, the evil mastermind must carefully deploy bad guys to maximize destructive capability. Bad guy minis are represented on the command post by corresponding tiles that depict their stats, but after activating, those tiles slide to the end of a row (or river, as the game calls it), where their activation cost climbs dramatically. While it might be tempting to send Deathstroke out into the fray again and again, it’s simply too expensive. Likewise, big events can be triggered with other tiles from the river, such as bringing a neutralized foe like Talon back into the fight. It’s all a clever way to supercharge the villain’s potential and their large cast of available minions against the often ultra-powerful heroes and their many wonderful toys. In my experience, the villain often has the upper hand (by design), and the heroes must really scramble to pull off a win.

Gotham City Chronicles’ biggest hurdle to enjoyment isn’t in its core play, which I really enjoy. Instead, it’s that the game is more imposing to learn that it needs to be. An ominous 60-page rulebook accompanies the game, filled with lengthy examples of how to juggle any one of the many specific situations that can arise in each scenario, but any given situation is challenging to find when you need it. There are dozens of visual icons to parse that govern specific dynamics. But here’s the thing; behind all of that, the game really isn’t that complicated. In fact, the publisher’s own how-to-play video is more than enough to get you in the door – if you’re willing to overlook some of the nitty-gritty details for your first couple of games. I still wish the barrier to entry was lower, but I wouldn’t let it stop you from trying out the game (especially if you come to it with some previous board gaming experience). After a few games, I can say with confidence that the game moves briskly and exhibits the breakneck pace of action you’d want from this popular comic pugilist. 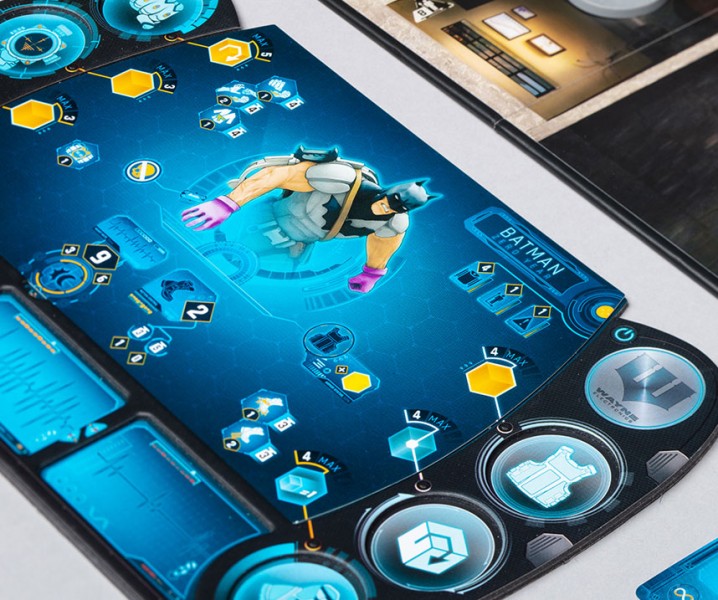 Primarily rolled out as a Kickstarter (the second season Kickstarter just finished, and is still accepting pledges), Batman: Gotham City Chronicles is an expensive investment, even by tabletop standards. Depending on expansions purchased you can easily roll over into hundreds of dollars spent on these gorgeous minis. That’s a big decision surrounding your luxury money, and the time cost to really get into the game is no small feat, either. With that said, for players who love these characters and setting, Gotham City Chronicles nails what is exciting about the world of Batman. And if you enjoy that kind of decadent weekend dice-throwing I referenced at the start of the article, this is a game with long legs and a gorgeous presentation. As a big showpiece of your collection that can provide many evenings of Bat-themed battles, rescues, and adventure, this is arguably the benchmark tabletop project by which Batman games (and many other superhero games) may be judged for some time to come.

If that kind of big-time investment isn’t in the cards, don’t worry; there are a ton of other awesome recent tabletop games to check out. Click on the banner below to visit the Top of the Table hub, and peruse some recommendations. If you can’t find what you’re looking for, drop me a line via email, and I’ll be sure to respond with suggestions.