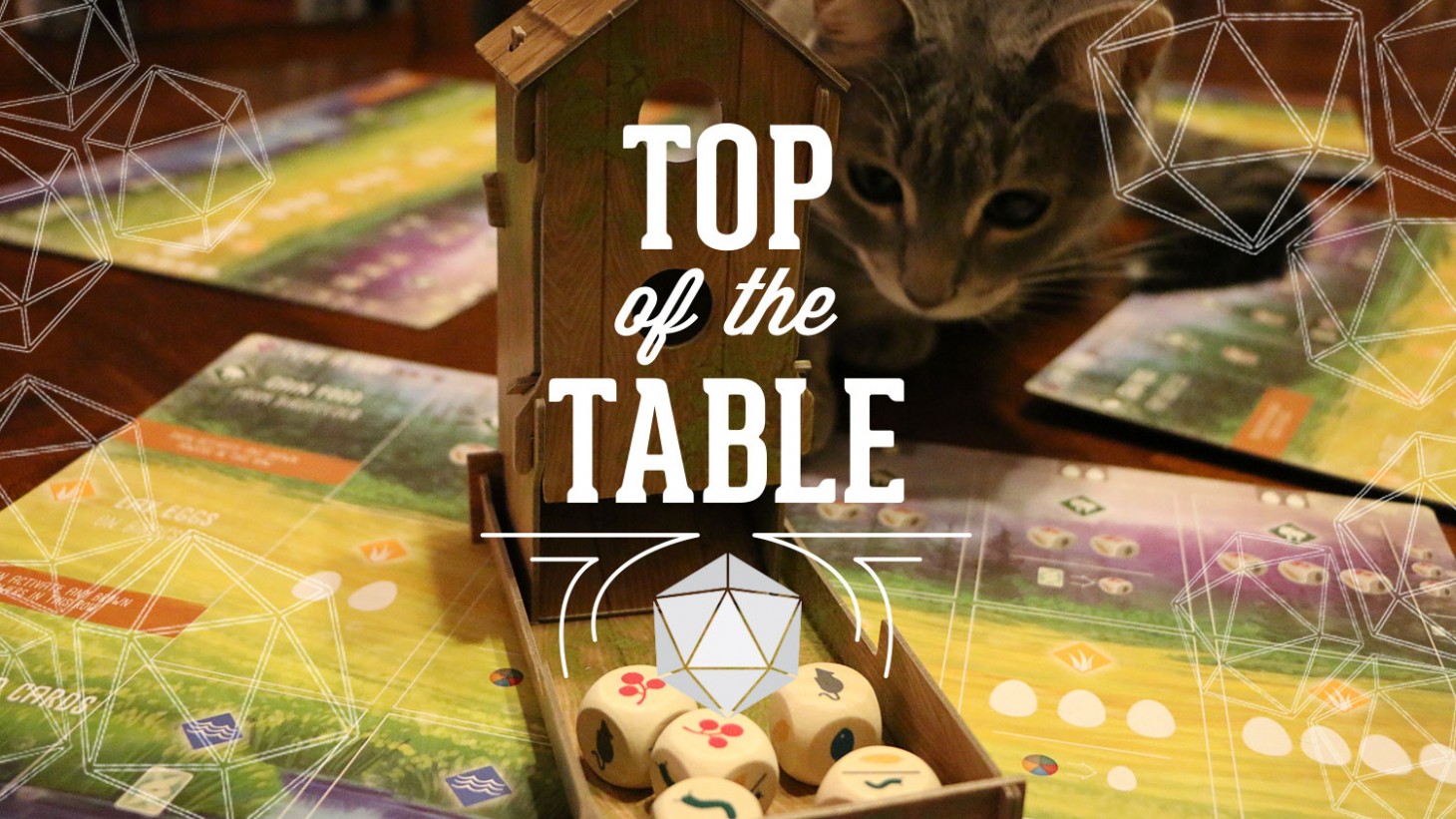 Top Of The Table – Wingspan

Don’t judge a book by its cover. The old maxim instilled into us as children can still have relevance as adults, and Wingspan helps prove the case. As I prepared this article, one of my non-board game playing co-workers saw the game box on my desk, commented about the attractive cover, but wondered aloud why anyone would want to play a game all about birds. The answer is that despite appearances, Stonemeier Games’ Wingspan is one of the most sophisticated strategy games to release in a long time. Intricately balanced and elegantly designed, it offers a nuanced series of decisions in every playthrough and vast replayability on subsequent runs. And from its gorgeously illustrated card faces to the custom trays in which they fit, it’s also one of the prettiest games you’ll ever pull from your shelf. Wingspan is just as beautiful as its cover promises, but your first game is enough to explain why someone would want to play what seems on the surface like such a simple concept: because it’s really, really fun, whether you come in with a love of birds or not.

Make no mistake; this is a game all about birds, or more specifically, about the people who enjoy and study them. Whether you think of yourself as bird watcher, ornithologist, or collector, the concept is the same; each player is building their own aviary or nature reserve, attempting to draw in a variety of winged creatures to establish a flourishing ecosystem of species and eggs, and score through a variety of other objectives.

Before you ever start playing, Wingspan will capture your attention through pure production quality. Solid, weighty custom dice are rolled into a cardboard birdfeeder dice tower, which adds an attractive vertical element to the table display. Every one of the 170 bird cards features original card art depicting a different avian, each a beautiful painterly piece in its own right. Included trays and deck holders do double duty, leading to an organized box that’s easy to lay out on the table, and also serving as designated storage to nest components during the game. The included miniature eggs are satisfying and smooth. Even the rulebooks are printed on a velvety textured paper that feels great beneath the fingertips. Wingspan recognizes what board gamers love about the physical aspects of play, and that tactile touch and visual display is a big part of why we love the hobby. 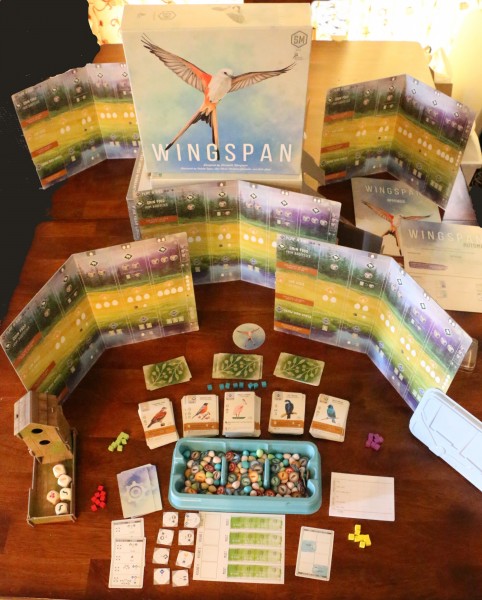 Mechanically, Wingspan is an engine-building game, a term that means you’re creating a system that produces resources, points, or other elements as the game goes on, which usually fuel and drive your subsequent actions or choices. Here, you’re producing eggs, birds, and food, each of which give you additional options as the game continues, all while carefully tracking the best route to end-game scoring. Each player is working largely in isolation to build up their aviary; while some card effects and available resource selections are dependent on what other players are doing, you’re still mostly focused on your own little corner of the world. That kind of limited interaction will appeal to many players, especially in a quiet and thoughtful game like this. There’s even a way to further customize that level of interaction, through a scoring board that is selected at the start of each session that can be flipped for more or less direct competition. I love this type of customization, as different groups I play with prefer a little less in-your-face adversarial play.

Designer Elizabeth Hargrave has crafted an immaculate game flow, with quick-moving turns that nonetheless provide meaningful choices at nearly every step. Without getting lost in the weeds of rules explanation, it’s enough to understand that play is all about choosing one of a discrete number of actions, each depicted on your personal player board. Individual actions – gaining food, eggs, or drawing new bird cards – are each tied to a particular habitat – forest, grassland, or wetland – which double as the places your various birds will settle, which also takes an action. By using your action to play a bird into one of the slots of each habitat, you increase the value of subsequent actions connected to that particular location, including gaining food, laying eggs, or drawing cards.

Not only do played birds improve the value of a habitat, but they also often carry their own bonus effects that trigger when you use your action on that habitat. For instance, suppose that on a previous turn, you played a northern cardinal into the Forest habitat. On a future action, you can activate the Forest habitat to gain more food than normal from the Forest, due to a bird already living there, but you also get to activate the cardinal card itself, which allows you to gain an additional fruit food die from the supply. Had you played yet more birds into the forest before activating it, your bonus would be even higher. But the more birds you’ve played into a given habitat, the more eggs it takes to place the next one down the line. 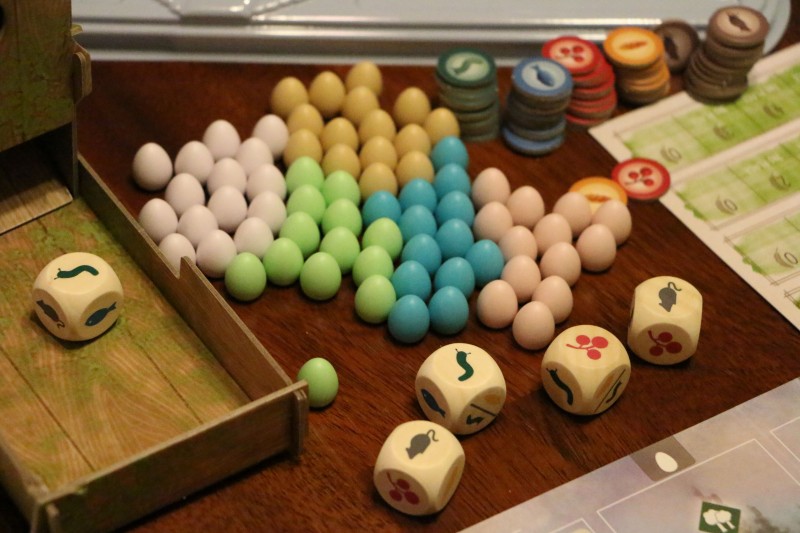 Food dice are rolled into the included birdfeeder tower, and the results dictate which food types are available on your turn

Like a real-life active ecosystem, everything relies on everything else, and builds gradually in concert. Obviously, you want more birds to settle in your aviary, but have you invested the time to gather the food you’ll need to convince them to come? Have you produced the eggs necessary to grow each habitat? You have fewer actions on each of the game’s four total rounds, so you must think ahead, knowing the limited turns you have to complete your careful plans. From the start of the first round to the point where end-game scoring begins, everything is about balancing competing needs, each of which is essential to success. The first big part of the strategy arises from the cards you choose to play, and when you choose to bring them into play.

The second big element of strategic depth emerges from objectives which are randomly drawn into play for each game. Players share a set of publicly viewable goals for each of the game’s rounds. Perhaps you score points for the most birds in the forest, or the number of eggs in the wetland. In addition, you have private objectives to chase on bonus cards. Perhaps you’re shooting for Fishery Manager, by collecting birds that eat the fish food type. Or maybe you’re looking to score points as a Historian, scoring points for birds in your aviary that are named after a person. Taken together, these public and private goals drive your aviary in different directions, and alongside the huge number of different birds, ensure that each playthrough feels different from the last.

The best board game themes manage to pull you into their worlds, and help you feel invested in the concept. Wingspan’s greatest triumph is taking a concept that might seem to have limited appeal – birdwatching – and somehow make you care about it, whether you started out interested or not. Like the real hobby, you uncover the joy of spotting so many dozens of distinct species in the wild. Each card has flavor text that tells you something about it. Maybe it’s not specifically relevant that Emily Dickinson wrote poems about the Bobolink, but knowing that helps you feel more invested in its presence on your Grassland. The gentle ecological overtones speak to a love of nature and its interconnected qualities. And somehow, even in the midst of all of that, the strategic layers are rich and rewarding. 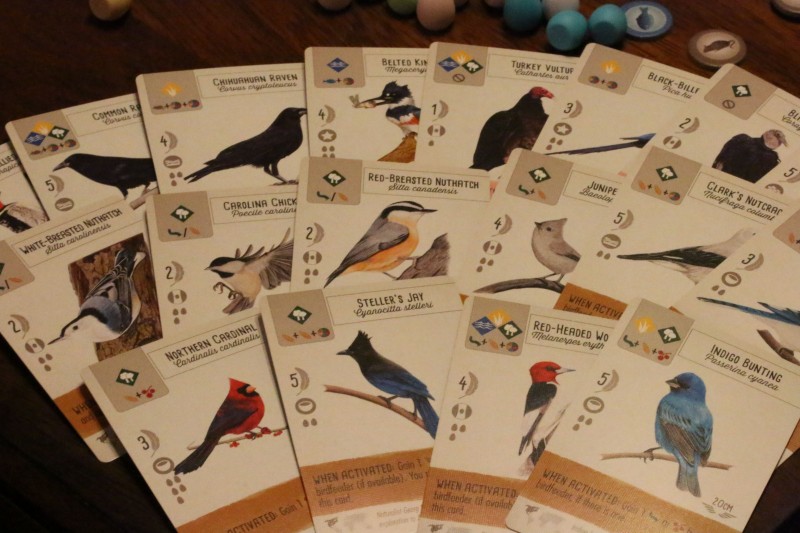 All 170 bird cards are unique in appearance, and feature a wide array of game effects

Wingspan can be played comfortably with two to five players; once learned, a full game can be completed in about an hour, presuming players don’t get too bogged down in decision-making. However, learning the game’s iconography and flow can take some effort for first-timers, so budget in significant extra time if you have new players along for the ride. As players have come to expect from Stonemaier, Wingspan also includes an excellent solo play option using the built-in “Automa” rules. The solo variant plays well and acts as an ideal way to learn the game, or enjoy the game when your friends can’t get together. It also features a simple way to customize difficulty, which ensures that the solo variant is still meaningful well after you master the mechanics.

If you’re a regular reader of Top of the Table, you know that one of my big goals is stated right there in the title. I want to help you find the best stuff that is rolling out in the tabletop world, whether you’re a veteran player or you’re just beginning to explore the hobby. Wingspan is one of those games that might not seem like a must-play at first glance, but I’d strongly recommend you work past that possible initial impression, and uncover the deceptively compelling experience it offers.

This recommendation of Wingspan wraps up an unofficial three-part series I’ve been rolling out all season, focused on games to celebrate springtime. If you’re curious, you can check out this look at Planet, a casual-friendly game with a similar eco-friendly flavor to today’s game. You can also read my round-up of the surprisingly varied milieu of games all about trees, flowers, and other growing things. And, of course, if none of that strikes your fancy, dig into the backlog of Top of the Table entries from the banner below. Alternately, drop me an email about what you’re looking for, and I’ll help you find the right game for you and your friends and family.