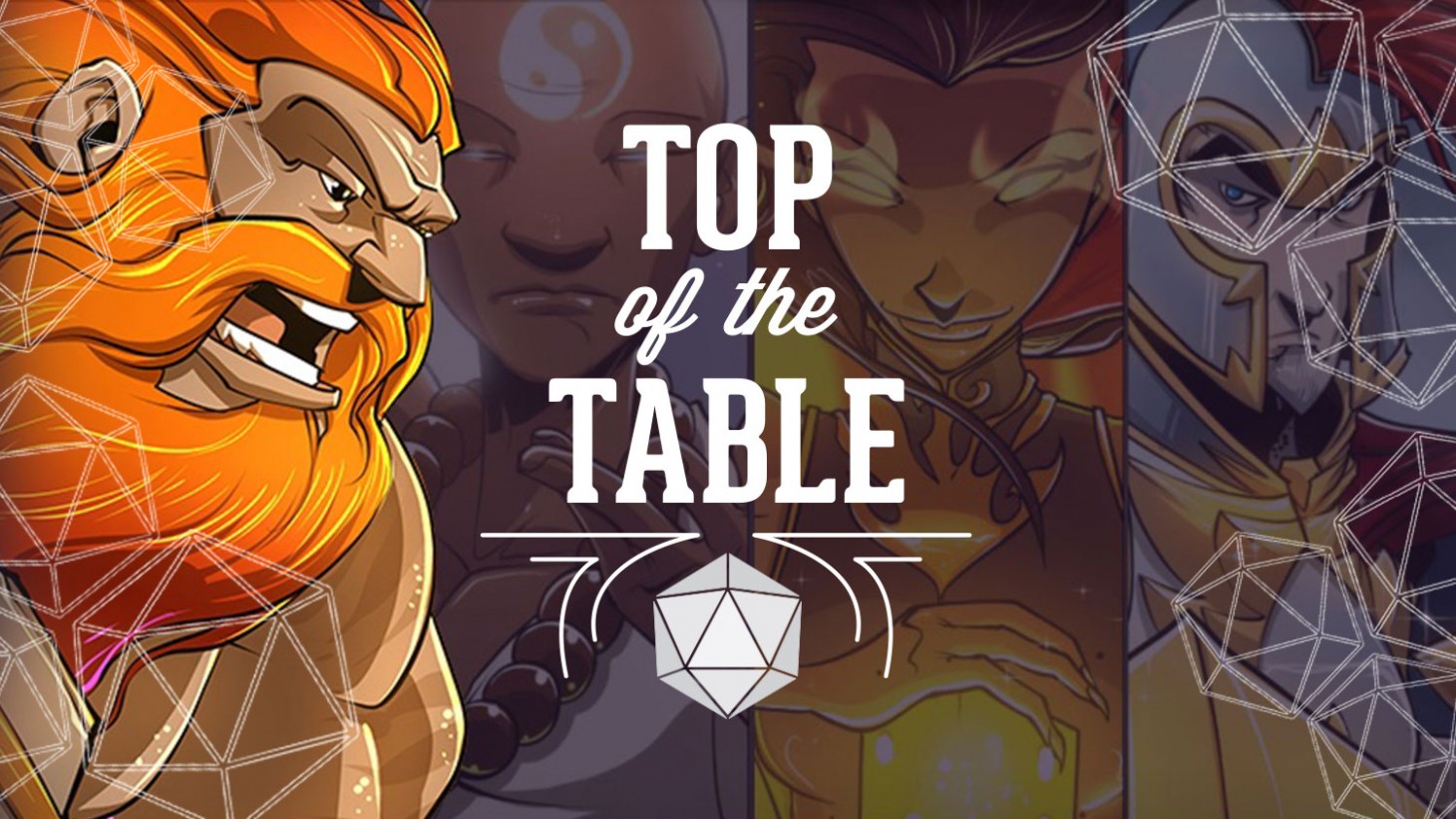 Back when Game Informer first began to explore tabletop gaming coverage, I’d often headline new game recommendations as direct comparisons to familiar video game genres like first-person shooters or dungeon crawlers. In more recent years, we’ve used that type of comparison less frequently. But this week’s recommendation of Dice Throne can’t help but draw some correlations for players discovering it while crossing over from the world of video games. Within the tabletop world, Dice Throne is innovative and surprising, with a brisk play time, flexible strategy, and tremendous replayability thanks to a growing bank of playable characters. But with its asymmetrical heroes, stylized art, abilities (including Ultimates), broad accessibility, and multiple modes of play, video gamers will immediately recognize a kinship with Blizzard’s stellar Overwatch. And that’s a great thing; Dice Throne is a lot of fun, and deserves your attention.

Dice Throne has a simple premise. A mad king has ruled for a millennium, and every year he hosts a tournament to find someone worthy to take his throne. You must compete against your opponents to earn the right to challenge the tyrannical ruler. Across two seasons of content, Dice Throne has grown by adding to its varied roster of hero characters, each of whom draws inspiration from a wide array of genre fiction. There’s the evasive Moon Elf, who blinds and entangles opponents as she slowly knocks down their health. The Gunslinger spins her twin pistols as she fires off bullseye shots. The Monk carefully balances his chi to contribute to both added offense and defense. In classic 1v1 duels, or larger team and free-for-all matches of up to six players, these and around a dozen other available characters duke it out with their unique abilities to see whose combat style can win the day. 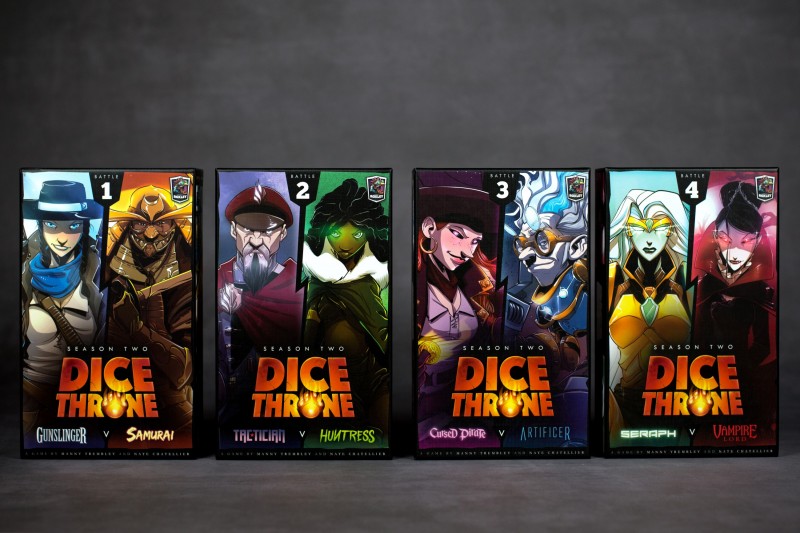 Season 1 or 2 can be purchased as full character collections, or in smaller and less expensive dual-packs

The results of those battles are determined through a clever gameplay loop involving dice rolls, action selection, and augmenting or altering effects through the use of cards. On their turn, each player rolls a custom set of five dice unique to their chosen character, revealing both numerical results and icons connected to that character (like a sword symbol for the Barbarian). The player can attempt to reroll their choice of dice a couple of times before locking in results, and then applying those results to perform a particular action. Whether it’s the Paladin’s Righteous Combat attack, or the Samurai’s impressive Masamune, each ability can only be triggered if you have the correct die faces showing. Some abilities deal direct damage, some buff your hero, and others inflict debuffs on your foe. As attacks roll in against your opponent, they usually have a chance to roll their designated defensive ability, which can itself cause additional effects and damage. On top of dice rolling, a deck of hero-specific cards offer additional ways to upgrade or (crucially) alter die rolls to augment your turn. Then the whole thing repeats with your opponent(s).

Once you get a hang of the action, these turns move quickly and provide a wealth of interesting choices. Should you spend your turn healing up and increasing your combat points in order to spend on a big card play next round? Do you dare to use your reroll attempts to lock in your elusive but devastating ultimate ability, even knowing it’s a long shot to get the required rolls? Maybe your Pyromancer should focus this turn on building up their fire mastery status effect, which might lead to especially potent damage on your next turn.

The interplay of different strategies is a ton of fun, but it’s the variety in each hero character that really helps Dice Throne stand out. Each character adds a new dimension to play, and the designers have done an excellent job maintaining balance even as new heroes add wrinkles to play. I love learning the playstyles of each character in turn, and discovering the ways that their abilities play off of each other. By focusing on new characters as a way to grow the game, expansions are meaningful and rewarding, and encourage diverse approaches to play. 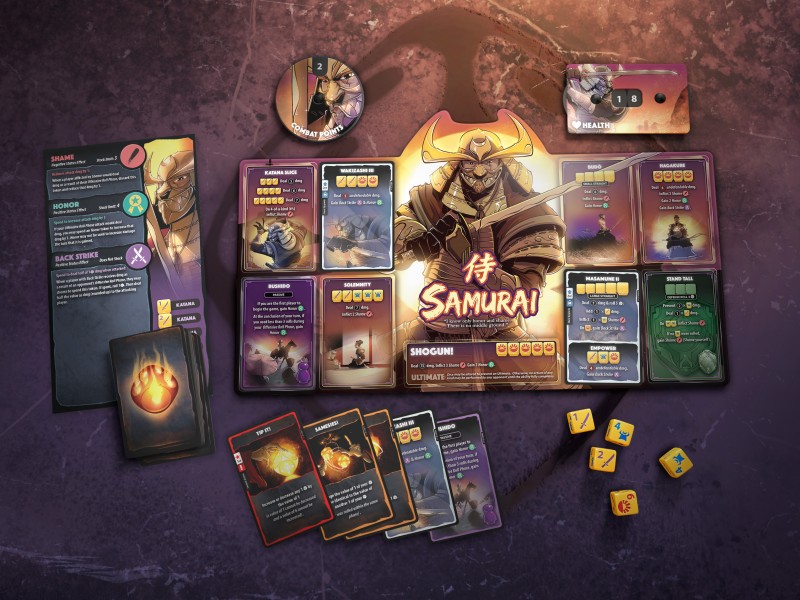 All the game components for a given character are unique to that hero, including the dice rolled during play

Moreover, it also means you can customize your level of commitment and cost of entry. While Season 1 and 2 can both be purchased in full, you can instead buy smaller dual-character packs; I hope that publisher Roxley Game Laboratory continues support for the game in the same fashion over time, growing the roster for players to pick and choose between as they desire.

I’m also a big fan of any game that manages to pack in compelling strategy in an accessible and understandable formula, and that’s a challenge that Dice Throne manages with aplomb. With its preset heroes, helpful reference cards, and smartly written rules, this is a game that’s easy to introduce to newcomers. While balanced well against any one other character, heroes have varying tiers of complexity, so you can choose a playstyle that matches your experience. Colorful cartoonish art and clear presentation further lend the game a welcoming and appealing sensibility. 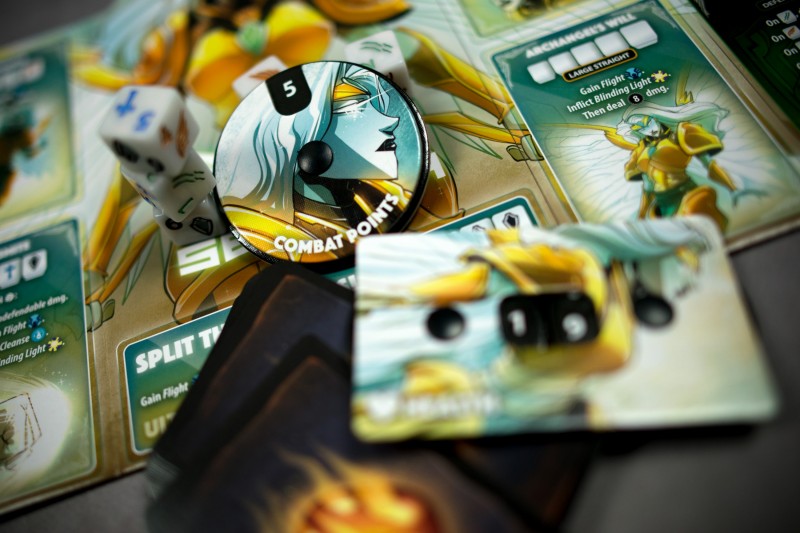 And perhaps most importantly, individual matches can be played in under an hour, and often in as little as 30 minutes once you know what you’re doing. As such, you can fly through a single game with your buddy over a lunch break. Or at the other end of the spectrum, a gaming group could have a blast wiling away a weekend setting up their own tournament, with regularly shifting or randomized hero selection to keep things interesting.

The random element brought on by dice rolling and card draws can sometimes hurt a strategy experience. But I’d argue that in this instance, it’s that very element of chance that brings Dice Throne to life, emulating the sudden unexpected moments of a cinematic battle, but still maintaining meaningful choices that result from each die result and new card that shows up in your hand. 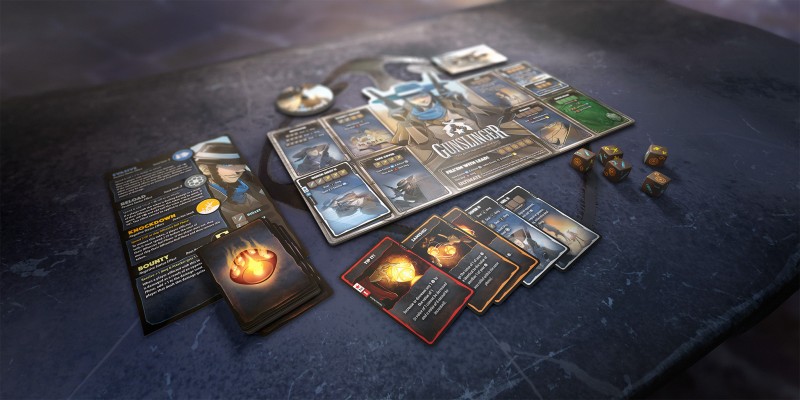 All of your hero's abilities and effects are clearly highlighted in the play area in front of you, making it easy to experiment with a new character

I’m very high on Dice Throne as a relatively lightweight strategy affair that nonetheless leads to some great competitions. Every time I play, I’m torn between returning to a favorite character, and the fun of trying out a new hero, and that’s a great feeling. Like the best video game hero shooters, there’s a depth and replayability that is hard to deny in Dice Throne, and one that I think could give it a long life at your table.

For more recommendations of great tabletop games to share with your friends and family, feel free to click into the Top of the Table banner below, and peruse some other excellent recent games. If you’re looking for additional guidance on finding the right tabletop game for your group, drop me a line via email, and let me know what you’re looking for.