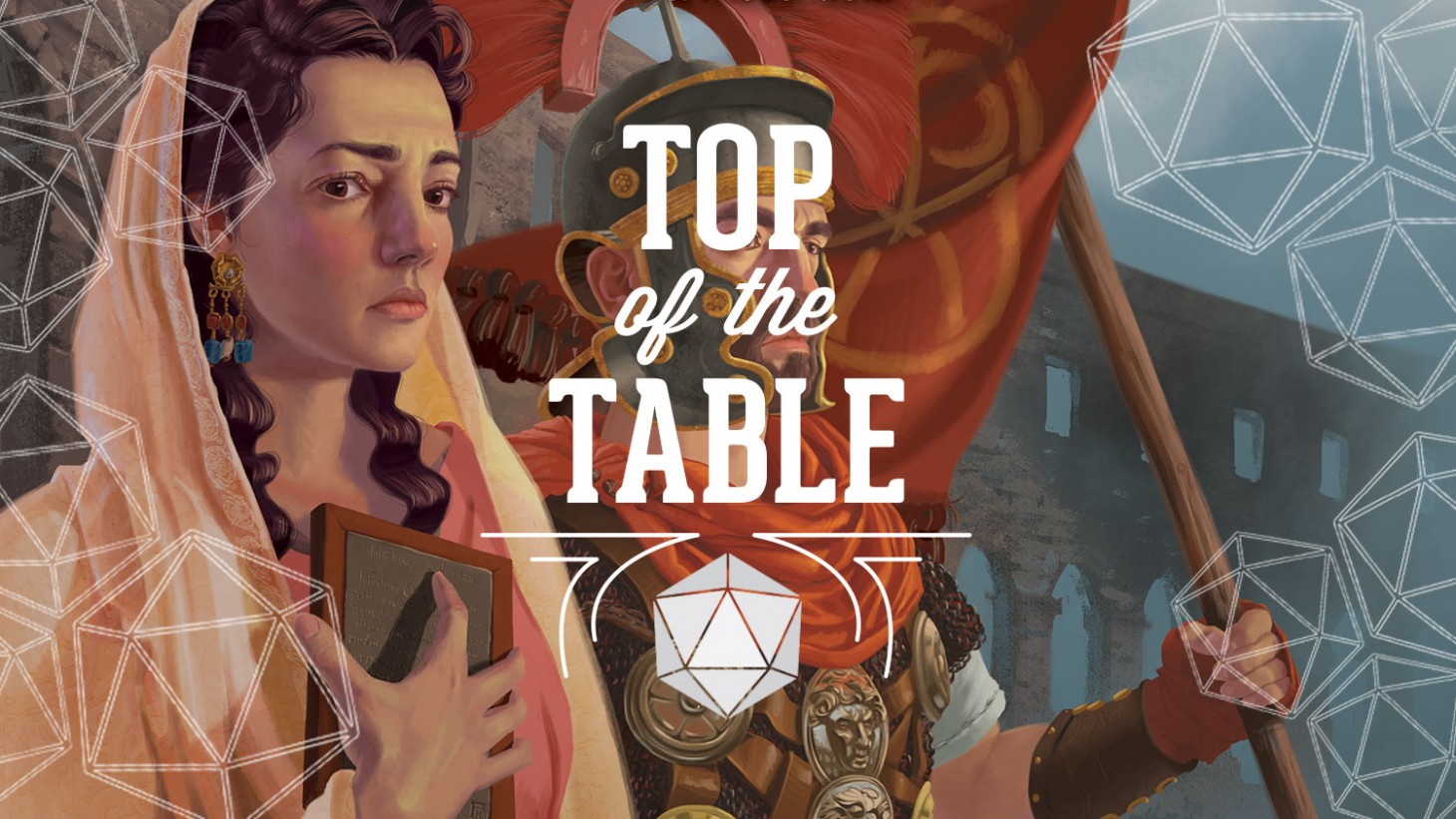 Top Of The Table – Pandemic: Fall of Rome

Pandemic is one of those rare board games that has breached out of the hobby market, and has at least a passing familiarity from a more mainstream game-playing public. And there’s good reason for that. The original Pandemic offers a tense and rewarding loop, in which players work together to halt the spread of disease around the world. Just a few weeks ago, that original game found itself on my list of best gateway games to invite new players into the fold.

The formula and gameplay of Pandemic is surprisingly flexible, and that means publisher Z-Man Games has been able to transition the concept over to other themes and settings, overlaying the core gameplay loop onto new ideas that have little or nothing to do with disease outbreaks. The latest and probably most dramatic of these standalone variations is Pandemic: Fall of Rome. Here, players control the leaders of the Western Roman Empire as the barbarian hordes press in from every direction. Through combat, diplomacy, and even corrupt edicts, you and your friends must hold the line. The resulting desperate scramble to save civilization is a ton of fun.

Newcomers shouldn’t be scared of giving Fall of Rome a chance, but go in with the awareness that it’s a step up in complexity from the original game upon which it is based. As a player, you adopt the role of a Consul (senate chairman), Vestalis (priestess), Mercator (merchant), or other notable figure in Roman life, working together with the other players to halt several discrete tribes of foreign invaders by any means, and thereby hold together the strained Roman state. Move between cities, build forts, and deploy Roman legions. And even as you go to war against the attackers, you must simultaneously find grounds for peace with at least some of them, opening up the possibility of converting them to the Empire’s cause. In gameplay, you move your character around a board representing Europe and its cities from hundreds of years ago, all the while gathering cards that represent those cities, which allow you to fortify each urban center. 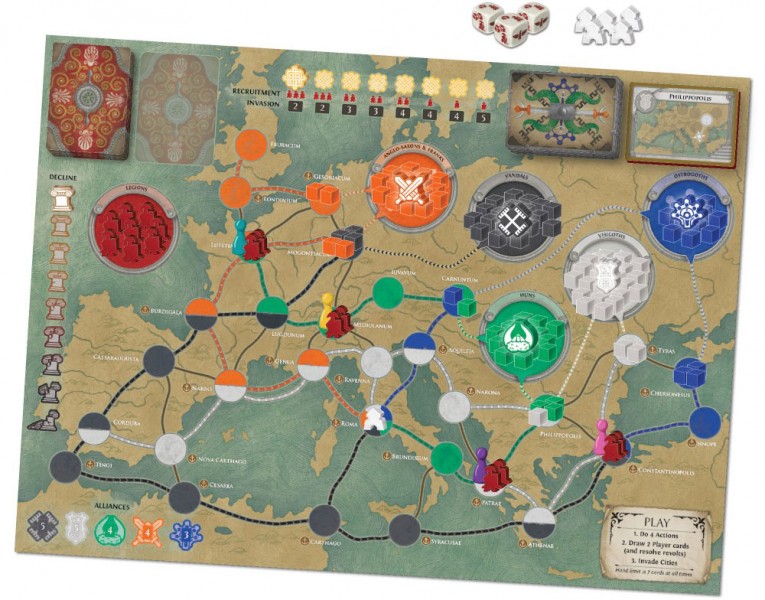 Invading armies follow migration paths as they creep toward Rome, and you must decide where to try and halt their advance

A fascinating card shuffling and drawing mechanic sees the game push back at your efforts, sending out invasions and exacerbating trouble spots around the Empire as cards that have already shown up repeatedly get drawn again and again. The sensation is always one of feeling like you’re on the brink of disaster in multiple places, and it’s all you can do to keep from losing for just one more turn. In this way, more than anything else, Fall of Rome feels most aligned with its parent game.

While Fall of Rome remains accessible to almost any player group, there’s no doubt that returning fans of Pandemic will find the biggest reward. Not only will many of the rule concepts feel familiar, but you’ll be amused by the ways that the disease concepts of the original have been tweaked to match the new vibe of invading barbarian hordes. No longer do cities outbreak, but they are sacked by tribes like the Huns and Visigoths. Instead of playing as the medic as they sweep clear large number of disease cubes, you have the Magister Militum, whose special abilities help to clear more barbarians from a city under siege. You can’t cure an epidemic, but perhaps you can forge a tense alliance with the Anglo-Saxons.

Those comparative elements are fun, but I don’t want to leave the impression that Fall of Rome is simply a reskin of an existing game. While the DNA of Pandemic flows through any given session, there are several elements that are handled differently, most of which ratchet up the complexity a notch or two, but also result in an intriguing flow of events. The barbarian hordes all move along migration paths that represent the way different populations pushed against the borders of the Empire between the 3rd and 5th centuries. In another clever twist, many player event cards allow you to complete a standard version of an action, or a more potent but corrupt version of the same action. In doing so, you might do a better job of propping up the Empire in the short term, but you also push the broader society one step closer to decline and collapse, emulating the political mismanagement, greed, and power-grabs that historically characterized the last days of the Roman Empire. 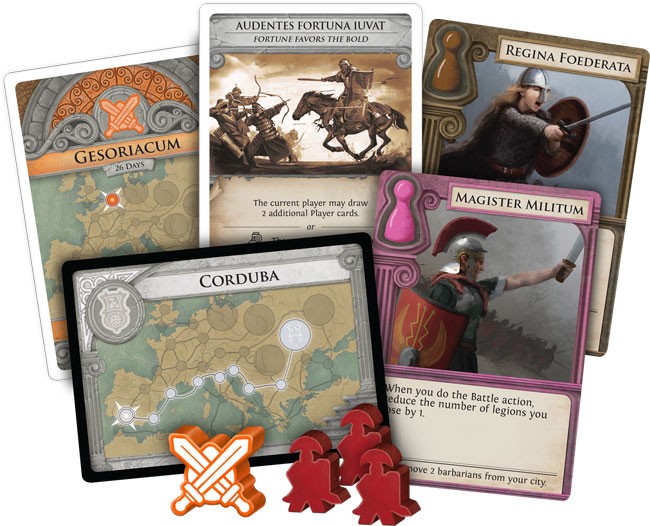 The core card drawing/shuffling of Pandemic is largely intact, but many other systems are dramatically reworked for the new theme

The biggest shift away from the original Pandemic is also the aspect of the game that will be the most divisive. Battles are handled through the roll of custom dice, which dictate the outcome of events in any given city as the Roman legions face off against the invaders. That’s a big departure, since the source game had a much more deterministic path to the resolution of disease cube removal. While I appreciate that distinction, in this instance, I found the dice mechanic to be rewarding and matched well to the game’s concept. As commanders of the Roman forces, I like the idea that war is unpredictable, and that even the best laid plans can come to nothing; sometimes Constantinople’s walls are toppled, despite the Senate’s most fervent military support.

I also like the way the game handles city defense and fortification. At any given time, Rome can sustain a limited number of forts across the Empire, acting as bulwarks against foreign aggression. Do you draw the line at Carthage to halt the Vandals, or keep the Anglo Saxons and Franks from pillaging Londinium, where London will one day stand? Forts ensure that large deployments of the Roman Legions will only take a partial hit when the city is struck, but even mighty armies crumble quickly without defenses, as barbarian ambushes wash over them, and entire swaths of allied forces can be lost in a single turn.

Fall of Rome closes its rulebook with a page of historical notes, and it’s the first place that admits the game is not meant to be a historical simulation. Historians will be quick to point out the multitudinous avenues that brought the once-great civilization to ruin, and that foreign invasion was only part of the equation. Even so, for a straightforward cooperative game that plays in a little over an hour (in my experience), it’s an intriguing conceit, especially juxtaposed against the backdrop of real-world events. While the game never steps past its historical inspirations, the timing of its release offers some interesting avenues to conversation. Are you really playing the good guys in this story? What’s the inflection point between civilization and survival for one group, versus the safety and security of another? It’s telling that one of the only paths to victory for the player group is through locking down alliances and integration with at least some of the foreign cultures moving into their territory, reflecting some historical truisms that modern society struggles to confront. 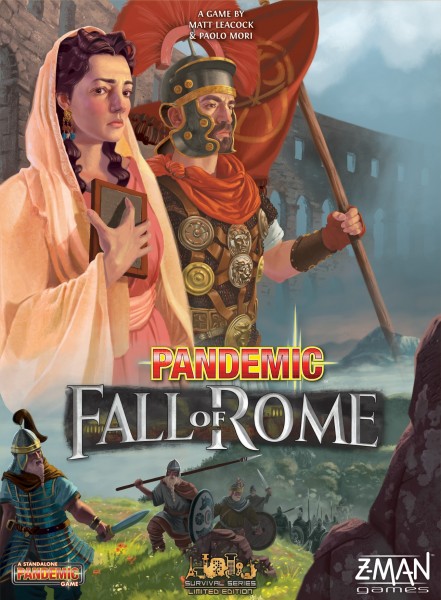 Pandemic: Fall of Rome plays 1 to 5 players, and your early games will take at least an hour to complete

Those interpretations are subjective, but even stripping that layer away, Pandemic: Fall of Rome does an awful lot of things right. Balanced (but very challenging to win) gameplay keeps all the players engaged and thinking, and a simple adjustment allows for variable difficulty settings. Canny mechanical systems reinforce the theme and setting. There’s even a first-rate solo variant included in the rulebook, in which the player takes on the role of the Roman Emperor, with the ability to dip into the Treasury to command victory for Rome; I love when cooperative games offer solitaire options, which provides an ideal way for new owners to try a full game before introducing it to friends. Fall of Rome capitalizes on the successful formula Pandemic first introduced, but offers a departure that feels independent and exciting. Whether you love Pandemic’s gameplay and you just need a new perspective, or you were just never excited about the disease-centric theme of the original, Fall of Rome could be a welcome addition to your shelf.

If cooperative games aren’t your thing, worry not. Click the banner below to explore the full backlog of Top of the Table recommendations, and hopefully you can find a new board game that fits the bill. When in doubt, drop me an email, and I’ll be happy to help you locate the right game for your group, or even just the right last-minute gift for the gamer in your family.