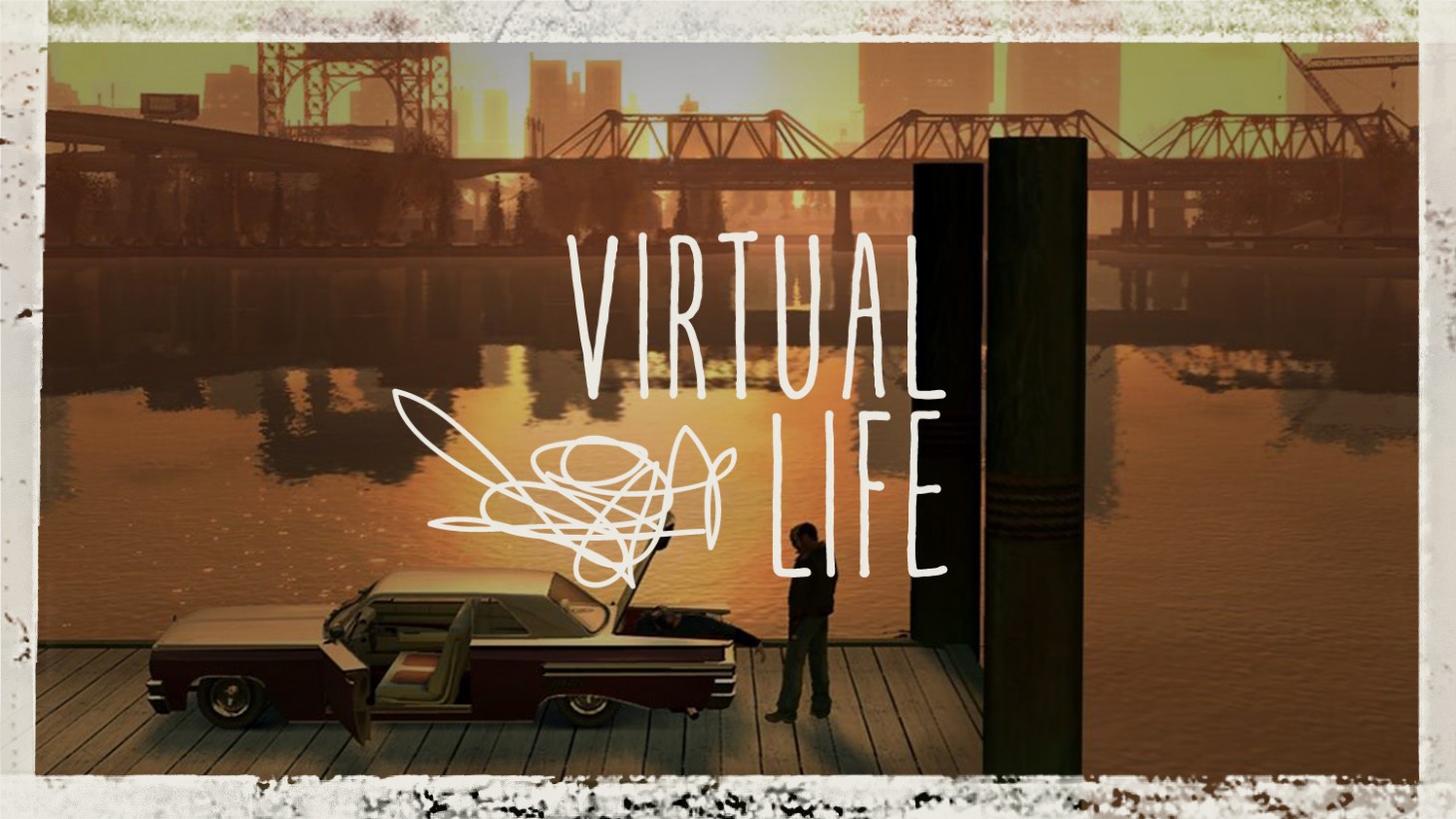 I grew up in the era when Grand Theft Auto was basically contraband. In 2003, my friends and I pitched in to buy a copy of Vice City and shared it amongst one another, out of the eyesight of our parents, who had all been worked into a fearful frenzy by articles in USA Today about the game’s prostitution and violent propensities. Grand Theft Auto wasn’t just a game to us but was a central part of our adolescence, the kind of all-caps MATURE thing we experienced as an act of rebellion as much as a fun doodad to pass the time.

Grand Theft Auto IV came at a strange time. I wasn’t even playing games at that point anymore, having ditched my consoles when I went to college in 2007 in an effort to focus on my studies and become a world-renowned author™. However, I still found myself drawn to IV, not because it was the next-gen version of GTA, but because so much of that game spoke to a thematic evolution that I was interested in. Head-down in books like The Great Gatsby and The Crying Of Lot 49, GTA IV’s somber take on finding yourself lost in the bleak tunnels of The American Dream as a poor person while the rich get stupider, crueler, and richer spoke to me. I spent countless hours on a friend’s Xbox 360 to complete the game, eagerly playing through the sad tale of Niko Bellic.

You’ve probably read a hundred hot takes on Grand Theft Auto IV and The American Dream. You can go here for my version of that if you want, but I want to focus on something different for this piece. IV excels when it comes to building something that is rare for open-world games: a thematically unified experience that works when it comes to telling a story while also respecting that the player is an autonomous inhabitant of that world instead of a passenger. The way that GTA IV does that is that it accentuates its heaviness. 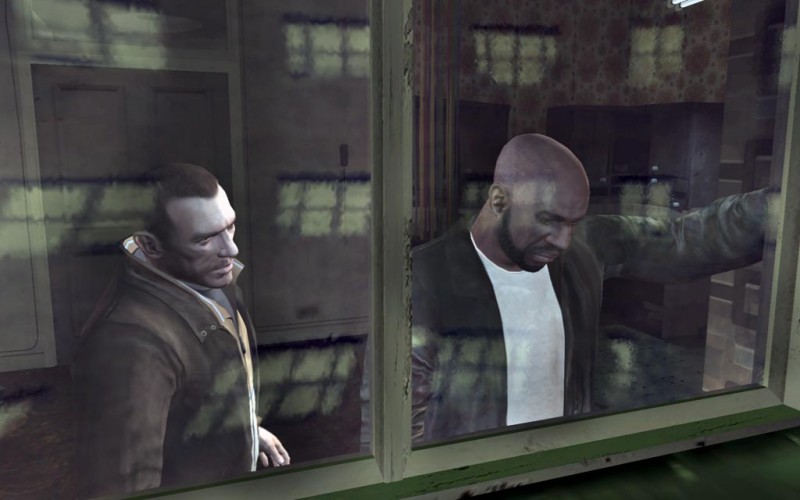 Heavy is (forgive me) a loaded word. There are obvious examples of heavy, when it comes to physical weight. Something – a bag of rocks, an anvil – is heavy. There is also the thematic version of the word, of course; to say something is heavy is to say it’s weighing you down emotionally, it’s depressing you. GTA IV has systems in place both in moment-by-moment gameplay as well as the narrative that embraces both of those.

Since the narrative's emotional heaviness is pretty obvious for anyone who’s played GTA IV, let’s talk about the gameplay concepts, like physics. GTA IV’s physics are paradoxically unique in that they present a surprisingly eloquent take on awkwardness. Everything feels like it has a defined weight in GTA IV that drags it down. Niko walks without elegance, always a victim of his own lack of balance. Sometimes someone will brush past him or a car will gently tap him, and he’ll fall over awkwardly. Cars are an extension of that. Even the faster convertible vehicles turn much more slowly than they would in a racer or another GTA game. To call them tanks would be exaggerating, but they’re not nimble.

In GTA IV, gunfights feel similarly unique. Plenty of action games make use of destructible cover but there’s something about the weightiness of the world that makes it feel alive in a unique way. Taking cover behind a car during a fight with the police will result in the vehicle slightly jumping when rounds strike it, the glass above you will shatter and rain on you as bullets break through. Melee combat is clumsy but visceral, with Niko's brutal pistol whip of an enemy coming around the corner creating a combination of tension and surprise. The delayed execution of the move plus the enemy's stagger backward leaves an opening for you to finish them off, and it is surprisingly and uncomfortably intimate. 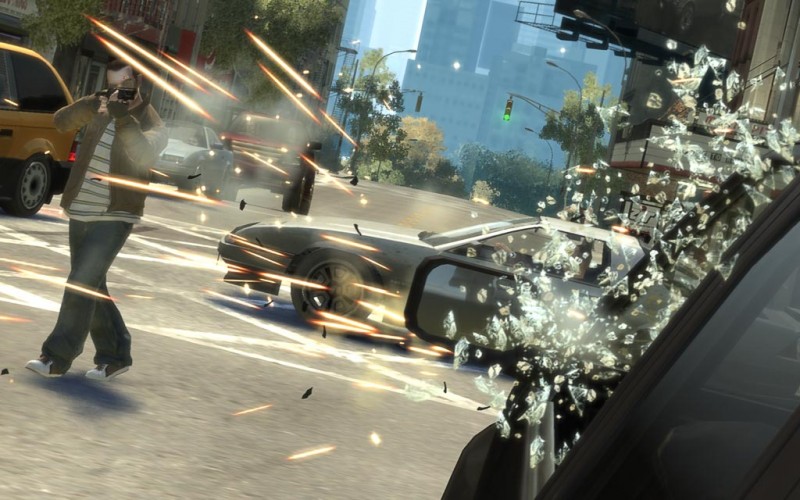 People rightfully noticed that the ragdoll animations and even pacing of the gunfight action changed for GTA V, with enemies popping out everywhere and their bodies reacting in more of a “drop dead” sort of manner than IV’s mixture of prolonged and sagging animations. IV’s kills are disturbing because of the intimacy that V trades away for its scope and genre conventions. Where V is constantly throwing you into the sort of action sequences you’d see in Speed and Mission Impossible, IV’s gunfights often take place in squalor. The immediacy of nailing a drug dealer’s eyeball around the corner in a ratty slum’s hallway with a blind fire from a pistol and then watching their head blow back against the wall is much more disturbing (and interesting) than V’s approach.

The difference between the two modes of violence makes sense when you consider the works they're aping. V is the culmination of Rockstar’s love affair with the films of Michael Mann (Thief, Heat). The action is breezy and enjoyable, with the screen briefly flashing to let you know when you kill someone. More focus is put on taking down waves of enemies in wide open streets (as opposed to Liberty City's narrow ones) and deserts to mimic high-quality, pulse-pounding action sequences like this:

The action never really stops; there’s an almost choreographed element to it. Shot, shot, shot, show kill, okay move on to the next thing. Very little lingering. IV is different in a way that recalls prestige television, particularly when HBO was the king of it with the likes of The Wire and Oz. Take a look at this bit from The Sopranos:

Notice the elements here. There’s a lot of lingering on the injuries, blood splattering on the windshield, the detail of the car slowly moving ahead to collide with the parked one, the bullets. There is no zipping around with cuts. This sort of storytelling places emphasis not on frantic action but instead on the notion that this violence is having an emotional and physical effect on the world. Cars move. Glass shatters. People moan in pain.

GTA V has these effects, like grass breaking and death moans, but they're minimized due to the high production values and the waves of enemies that come after you while Tangerine Dream’s beautiful score plays in the background. It forms a wall between you and the violence. Yes, this is entertainment. Don’t worry, you’re just playing a video game that is mimicking that action blockbuster you saw last summer.

IV has little in the way of such artificial barriers. There is no soundtrack to cover the cries of the man you just shot as he begs someone nearby to tell his wife he loves her. Its violence is disturbing and often cruel, helping turn Niko Bellic into a complex character, someone with noble qualities that nonetheless commits heinous actions that bring death and suffering upon countless people.

Niko’s emotional scars and suffering from a brutal, adolescent betrayal have left him incapable of navigating the world as anything other than a mercenary for hire – someone capable of turning off his emotions to hurt people for cash. The systems in GTA IV, particularly when it comes to physics and animations in combat, accentuate that just as much as the story does. Every act of violence is mired in the throes of artistic realism, with character models stumbling back, while the world erupts around you in a sluggish but convincing way that grounds the drama of Niko's story.

Of course, a lot of these differences probably exist outside the realm of artistic intent. GTA IV was Rockstar's first real attempt to grapple with the RAGE engine on a huge scale, so the awkward physics and clunkiness of combat is more likely a result of that than any intent. However, at the end of the day, you have the piece of art and intent only matters to a degree. It doesn't matter if GTA IV's physics are accidentally compelling or a mistake, they're still fascinating and immersive storytelling props. 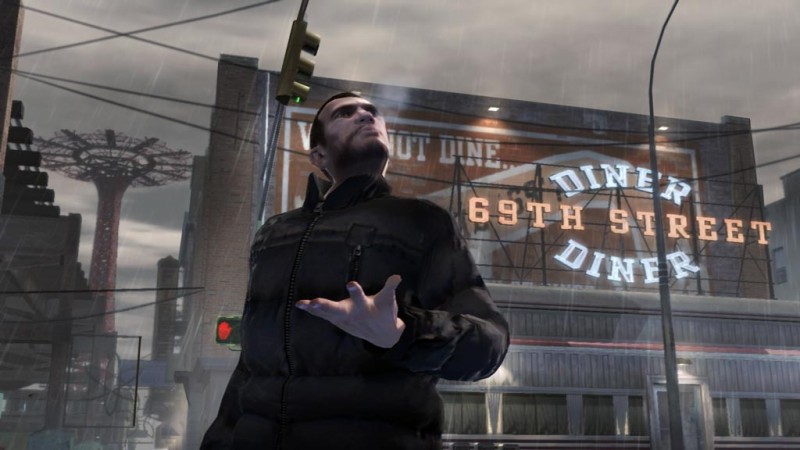 Storytelling in games is still unfortunately often observed in terms of traditional narrative. "The plot and the characters are good." However, I think it's worth paying attention to the elements outside of that. Just as an actor brings a character on a script to life for a movie, the technical stuff that you might not care about on first glance (like how physics weigh on a character and define their tether to the world) is often key in making that story what it is in the first place. The worst thing that could ever happen to GTA IV, outside of being removed from space and time, is a remaster that polishes the gunplay and makes the characters animations more graceful. To do that would puncture Rockstar's disturbing yet compelling depiction of The American Dream.

Yes, GTA V is a massive technical and artistic achievement that dwarfs IV in terms of content and pleasurable activities to do. And Vice City and III were both incredible games that did much to change the medium. However, IV remains the most important Grand Theft Auto to me because it’s a high-budget game produced by one of the most successful developers that goes all-in on creating an experience about wandering, sympathetic souls doing awful things and making tough choices to survive a dingy, despairing world.

IV is not without its flaws. The writing is problematic in certain places, particularly some homophobic and misogynistic sections that feel juvenile rather than provocative, and Oh My God I Forgot How Bad The Checkpoint System Is. However, IV's ambitions and its executions on those ambitions, are still unmatched by nearly any other game out there by my measure. Epic in scope and bleak but humanistic, IV lives beyond these issues as a modern classic in a way that the other GTAs just don't.

It's a game for all time.