Arc Raiders is an upcoming free-to-play cooperative shooter by Embark Studios, which is comprised of previous DICE employees who worked on the Battlefield series. Embark took to The Game Awards to unveil its project, Arc Raiders, offering our first big look at the game in action.

With Robyn's "Dancing On My Own" serving as the trailer's anthem, we were introduced to deadly mechanized threats coming from space that must be brought down with the cooperation of your squad. Plenty of gunfire and explosions naturally ensue. But then the trailer shows humongous mechanized beings that take up the entire screen, giving the fights a David versus Goliath feel. You are playing as the underdog and must work together with your team to shoot off enemy parts and make sure everyone stays alive. In one cool scene, a character launches toward the giant being and chucks a grenade right at its center. The trailer ends by saying: "They will never stop coming," and shows an armored baddie with red eyes rising. You can watch it for yourself above.

The game's description on Steam says players will wield tools and gadgets to outsmart the enemy and use physics to their advantage for success. 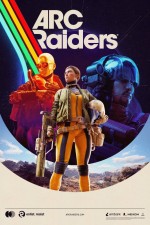