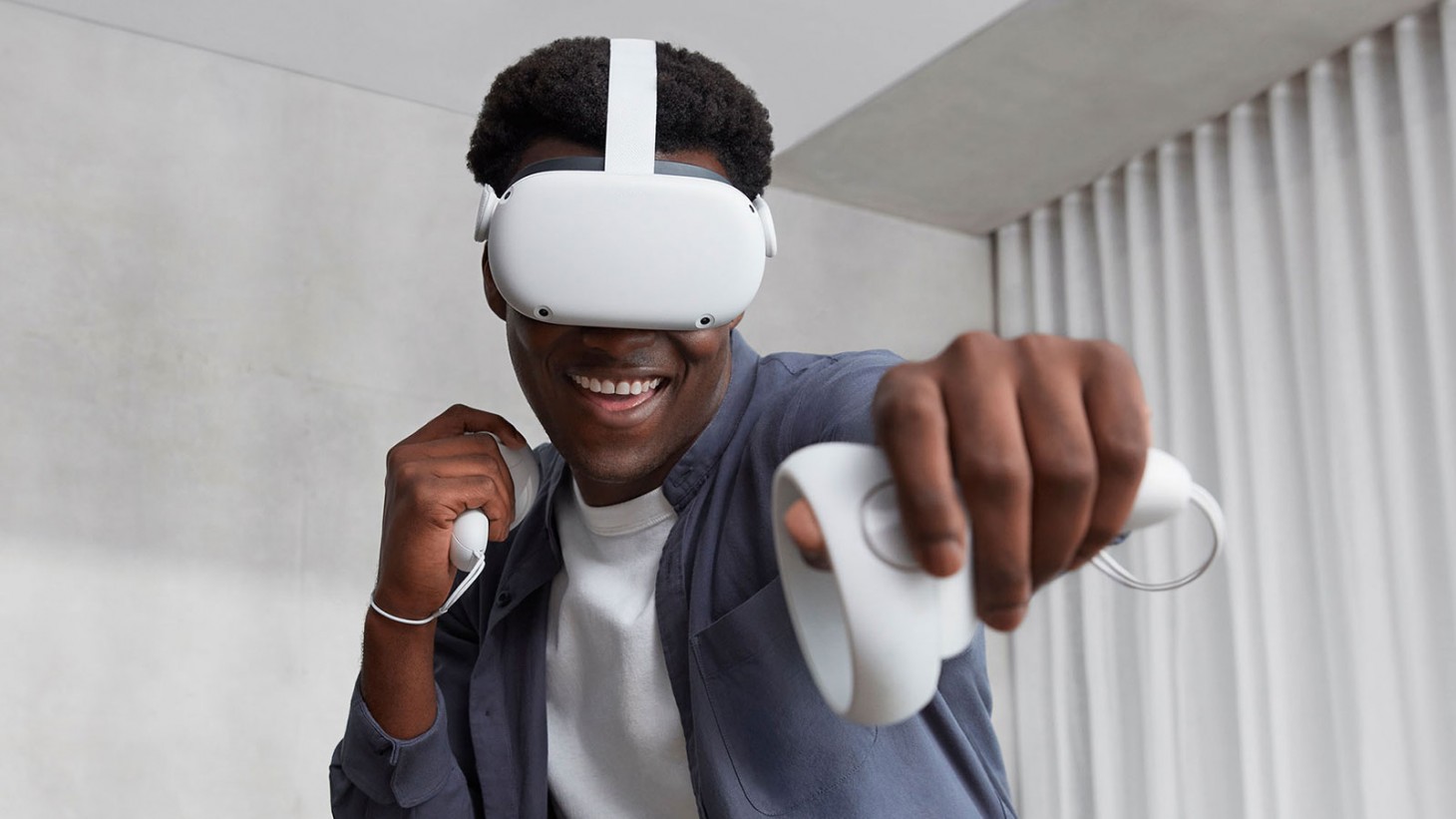 After nine months of restricted gatherings and social distancing, the weight of the Covid-19 pandemic hangs overhead with such a tangible miasma that you can practically taste the boredom. It’s easy to grow sick of doing the same things every day, especially if you’re stuck in an apartment. But hey, at least there’s virtual reality. When you plop a VR headset over your head and dive into a completely virtual universe, you can easily scratch that “go out and do things” itch. In fact, this is the best moment to get into VR. Thanks to the Oculus Quest 2, which sells at a bargain for $300, PC-quality VR is more affordable and accessible than it’s ever been. The best part is that you don’t even need a PC – this portable VR headset runs completely on its own.

How does the Oculus Quest 2 cut through cabin fever? When you put it on, you enter a completely virtual world, wherein an entirely new reality is superimposed over your field of view. When you crouch, jump, or peer around corners in real life, your avatar does the same thing in VR. And there are a vast wealth of experiences to have here; there’s plenty to satisfy your craving for adventure, but there are also tons of opportunities for social interaction at live venues, cafes, and movie theatres as well. Live concerts like the one thrown by Major Lazer in the Oculus Venues app are growing increasingly common, and even the gym is seeing competition with great fitness apps like Supernatural, which has received Time Magazine’s Best Fitness Invention of 2020 award.

Better yet, the stunning visual quality and vastly improved performance of the Oculus Quest 2 over its predecessor make the time spent in virtual reality so much crisper and more enjoyable than ever before. Not only does the Quest 2 offer more power and freedom to move around your living space without needing to connect to a gaming PC or a console, the enhanced 90hz mode (vs the Quest’s 72hz) makes gameplay feel incredibly fluid, and the almost 4K (1832 x 1920 per-eye) resolution offers outstanding visual clarity. It practically eliminates the notorious screen-door effect that made everything blurry on older VR headsets. 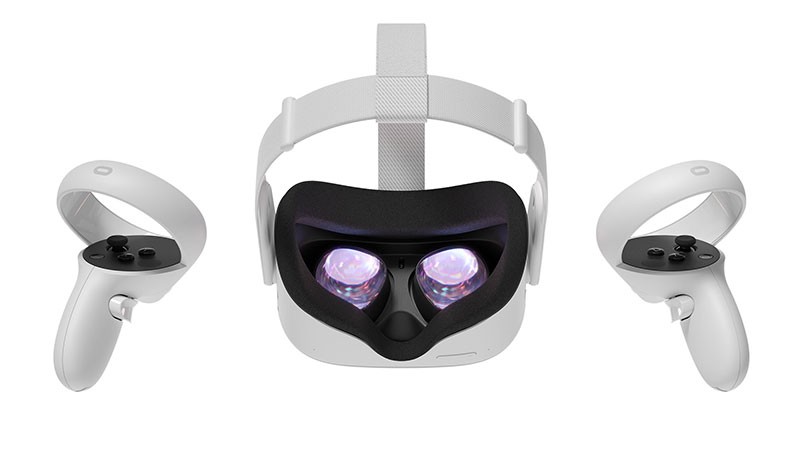 Unlike the Oculus Go and Gear VR that came before it, the Oculus Quest 2 is a 6DoF VR headset. This means that you can move around your environment with total freedom and your avatar will move with you. The included Touch controllers track your hand and finger movements, but they also provide haptic feedback that lets you feel objects in the virtual world as you touch and grip them. There’s nothing more satisfying than the feel of drawing back an arrow on a bowstring, swinging a sword, or landing a knockout punch, and Oculus Quest 2’s Touch controls feel tactile and weighty.

Also offered here is the brand new Qualcomm Snapdragon XR2 platform paired with 6GB of RAM, which doubles the performance capability of the Oculus Quest 2 over its immediate predecessor. This means that Quest games and apps run much smoother than before, but it also opens up new possibilities for much richer, deeper experiences; you can now venture alongside classic Star Wars characters in Star Wars: Tales from the Galaxy’s Edge, survive the zombie apocalypse in The Walking Dead: Saints & Sinners, and much more. 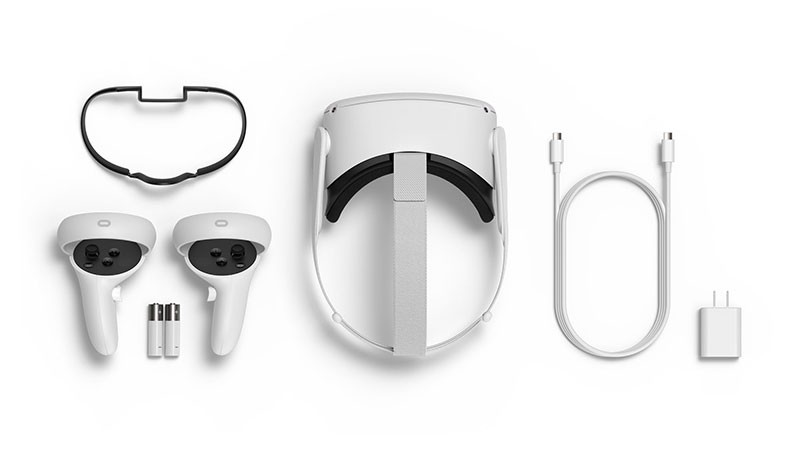 You can enjoy virtual reality for two solid hours without ever plugging the Quest 2 into a wall, but for PC gamers who are appropriately equipped with an Nvidia GTX 970 equivalent or higher, this also doubles as a fully PC-compatible VR headset. With a USB-C to USB 3.0 Oculus Link cable (sold separately), you can plug your Quest 2 into the Oculus Rift app on your gaming PC for however long you’d like.

And while you’re at it, you can fully immerse yourself in a deep roleplaying game like Asgard’s Wrath, drop into the pilot’s seat with Microsoft Flight Simulator, or you can even jump into SteamVR and experience the highly lauded Half-Life: Alyx with stunning visual clarity. The included Wifi-6 antenna makes it possible to cast gameplay at high fidelity, making it easy for you to show off your moves and share your best moments with friends across the world. 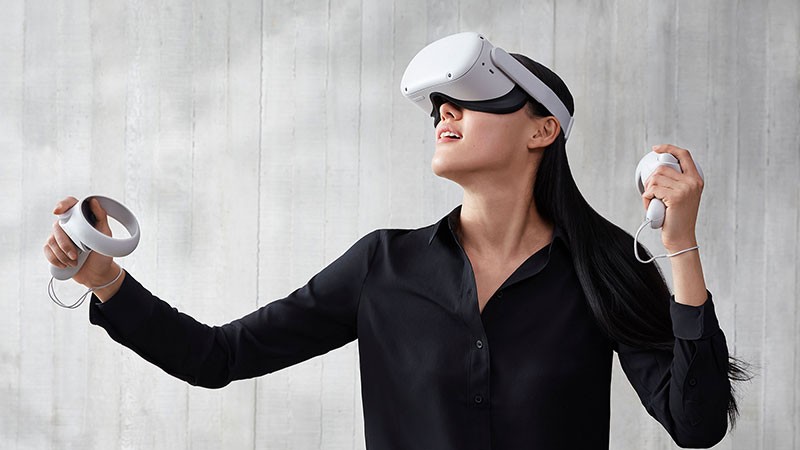 Pretty much everything you do on your Oculus Quest 2 is designed to immerse you as fully and completely as possible. It features a light frame with foam padding that fits smoothly and comfortably on your head, eliminating balance issues that existed on the original Oculus Quest. The included 3D audio system has also been thoroughly improved. You can now clearly hear positional audio with the included speakers, though it works even better when you match it with a pair of 3D headphones.

It’s never been a better time to go out while staying in. In sum, VR is a powerful tool to help you cope with daily life spent indoors and away from other people, and it’s no argument that the Quest 2 offers the absolute best value as an entry point into the immersive new medium that’s been relatively inaccessible in the past. It’s easy to feel a bit lost and helpless in the beginning, so we recommend checking out Road to VR’s list of top 20 best rated & most rated games & apps for November 2020. 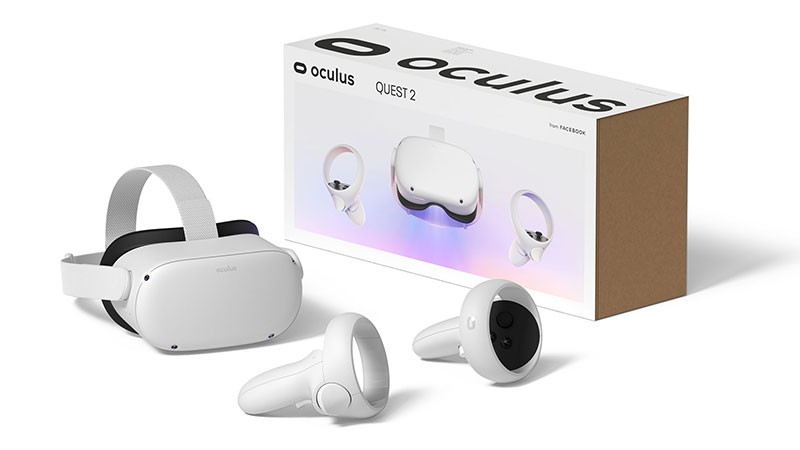 The future of VR looks especially bright with upcoming releases like Pistol Whip 2089, Warhammer 40,000: Battle Sister, and Myst VR. Everybody has something to look forward to: whether you’re excited to travel back in time and trudge across the trenches in Respawn Entertainment’s upcoming Medal of Honor: Above and Beyond, or you want to remember what it felt like to sit down in a movie theatre with friends in BigScreen, or you just want to get back into a fitness routine and improve your mental health. The leap into virtual reality has never been as attractive as it is right now.

You can start shopping for your Oculus Quest 2 today. The starting price is $300 for the 64 GB model, but many upcoming Quest 2 games and apps are space-intensive, so we recommend going all-in and nabbing the 256 GB model for $400.