On social media and image boards today, a screenshot that purports to be from Super Smash Bros. Ultimate showing a new character for the game. The shot, which you can see below, seemingly shows Street Fighter's Ken standing among several other characters from the game on the game's Splatoon stage. 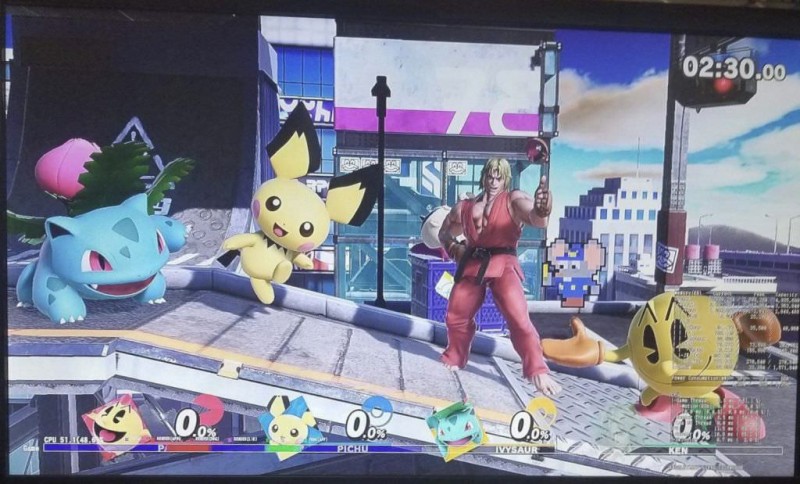 While we cannot verify the screenshot as real, it is worth noting that the Ken model seen here does not appear to be from any other game. It also looks different enough from Ryu's appearance in Smash Bros. that creating an edit likely wouldn't be that easy. If it's fake, someone went through some effort to make it.

Ken's foot clipping through the ramp is also an odd detail and does appear to happen to characters who stand on the ramp in Moray Towers.

With the introduction of Echo fighters, the name director Masahiro Sakurai has given to clone characters that do not greatly differ from another character, fans had assumed Ken was likely to show up as one for Ryu. The two have differentiated greatly over the years, but were initially identical and still play fairly similarly today.

Another possibility is that the character is real but the screenshot is not. In the lead up to Super Smash Bros. for 3DS, a fake screenshot showing Mario standing with Palutena set speculation on fire on the internet. When Palutena was eventually revealed, she didn't look like the screenshot, which prompted the person who made it to confess and show how he created the model just for the shot. People will go pretty far for their fakes.

Regardless of whether or not it's real, we'll find out for sure when Super Smash Bros. Ultimate releases on the Switch on December 7.