If you've been holding off on getting NBA Live 19, now's a great time with the new All-Star Edition.

If you already own the game this content is free, and is available for new players to purchase until March 22.

In conjunction with the NBA's All-Star weekend and this release, until March 22 the game is hosting weekly Versus events where you can go up against athletes, celebrities, and streamers to add them to your squad and earn their signature moves. 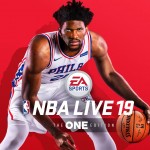