With the second Zone of the Enders game getting an HD re-release for PlayStation 4 and PC, Microsoft is keen to remind Xbox 360 owners that the HD Collection version of the game they already own can also be played on their current-generation console.

As always, if you own the games digitally, they should be under your download list. If you don't, you can buy them digitally on Xbox Live now or insert a disc to trigger a download and a disc-check whenever you play. Now you can be reminded why the Beyond the Bounds level in Zone of the Enders 2 is one of the best mech game levels ever. 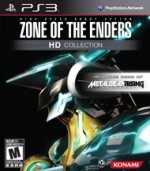 Zone of the Enders HD Collection